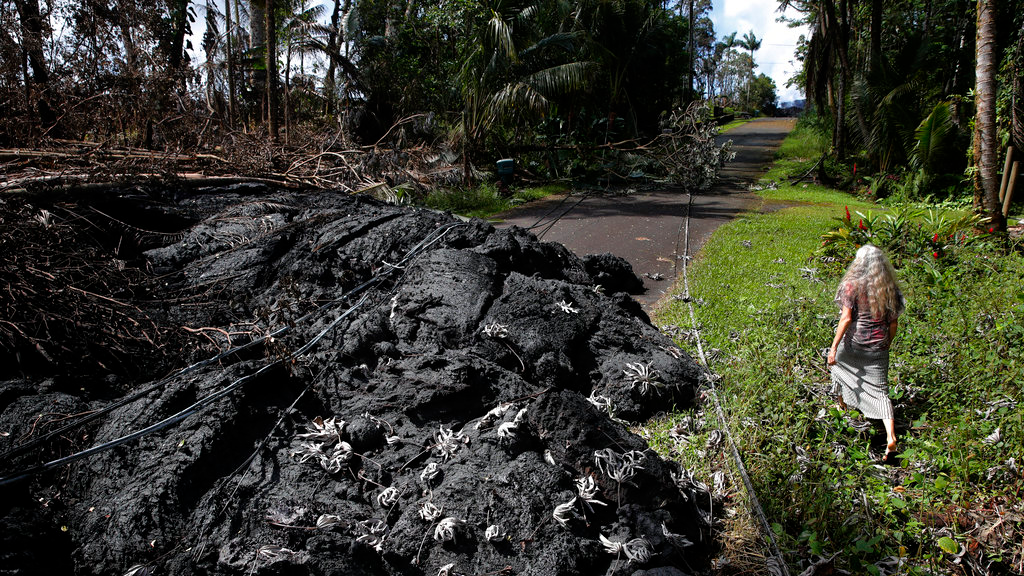 Hannique Ruder, a 65-year-old resident living in the Leilani Estates subdivision, walks past the mound of hardened lava while surveying the neighborhood Friday, May 11, 2018, near Pahoa, Hawaii. Kilauea has destroyed more than 35 structures since it began releasing lava from vents about 25 miles (40 kilometers) east of the summit crater. (AP Photo/Jae C. Hong)

The Latest on the eruption of Kilauea volcano in Hawaii (all times local):

A new lava fissure has opened up on Hawaii's Big Island in the vicinity of a geothermal energy plant.

The U.S. Geological Survey said minor lava spatter erupted from the new fissure Saturday morning, which brings the total number of fissures to 16.

The Hawaiian Volcano Observatory reports the fissure opened 1 mile (1.6 kilometer) northeast of the last fissure and east of the Puna Geothermal Venture plant.

No significant lava flow has been reported so far.

Plant workers this week removed the 50,000 gallons of pentane stored at the site as a precaution.

Geologists warn that the Kilauea volcano could shoot out large boulders and ash out of its summit crater.

Hawaii tourism officials are hoping Kilauea's eruption won't deter travelers from visiting the state's largest island, even as geologists warn the volcano could soon shoot large boulders out of its summit.

Travel industry executives note most of the Big Island is free of eruption threats from Kilauea, which began spurting lava into a residential neighborhood last week.

George Szigeti, CEO of the Hawaii Tourism Authority says Kilauea is being monitored constantly and says the Big Island is "immense" and there are large parts that are unaffected by the volcano.

President Donald Trump on Friday declared a major disaster exists on the Big Island. The move will make federal financial assistance available to state and local governments as they repair roads, public parks, schools and water pipes damaged by the eruption.

Hawaii volcano could spew boulders the size of refrigerators