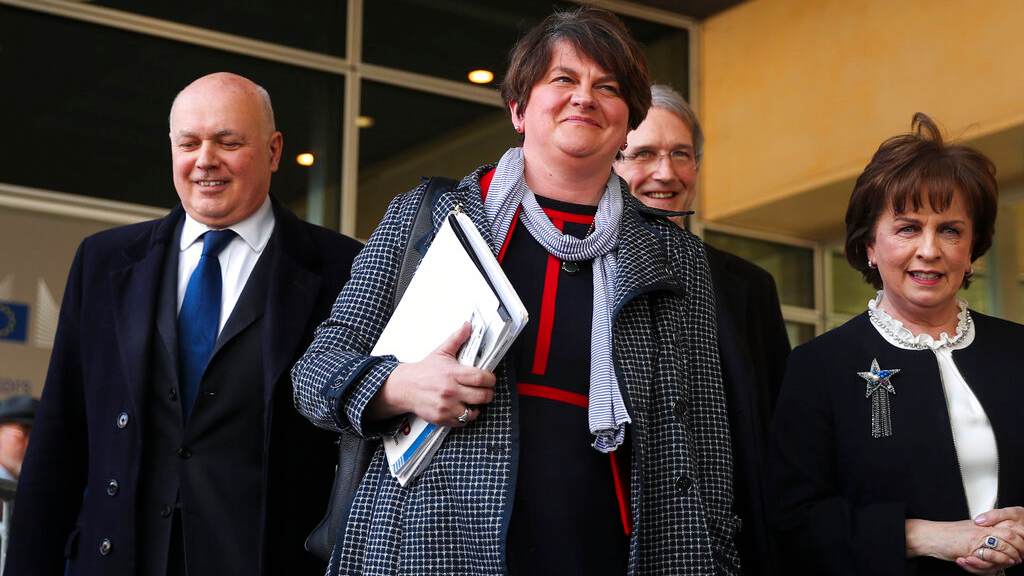 The DUP says that under plans to maintain an open Irish border, Northern Ireland will be "bound into arrangements that the rest of the United Kingdom will not" on customs and taxation — something the pro-British Unionist party can't accept.

It says that because Northern Ireland's assembly has no say on whether or not the measures are imposed, the deal "drives a coach and horses through the professed sanctity of the Belfast Agreement" — the 1998 peace treaty that ended decades of violence in Northern Ireland.

The DUP is a key ally of Johnson's Conservative government, and without the votes of its 10 lawmakers he will struggle to get majority backing for the Brexit deal in Parliament.

German Foreign Minister Heiko Maas has described the Brexit agreement negotiated by the British government and the European Union as "nothing less than a diplomatic feat."

Speaking to reporters in Berlin, Maas said the agreement "is proof that we all worked very responsibly together."

However, he cautioned that the deal still needs to be discussed by EU leaders at their summit later as well as the European Parliament.

The leader of the Scottish National Party says her party will not vote for the new Brexit deal agreed between the UK government and the European Union.

Nicola Sturgeon says the deal announced "would take Scotland out of the European Union, out of the single market and out of the customs union against the overwhelming democratic will of the people of Scotland."

She says in a written statement that her party's lawmakers "will not vote for Brexit in any form."

Sturgeon, who has long championed a second independence referendum for Scotland, says "it is clearer than ever that the best future for Scotland is one as an equal, independent European nation."

Brexit Party leader Nigel Farage has urged the UK Parliament to reject the new tentative deal reached between the British government and the European Union.

Farage said Thursday the deal is "just not Brexit" and would bind Britain to the EU in too many ways.

He said he would prefer an extension to the October 31 Brexit deadline to be followed by a national election rather than a parliamentary vote in favor of the new terms.

Farage said he favours a "clean break" with Europe rather than "another European treaty."

The leader of Britain's pro-Europe Liberal Democrats says the party is determined to halt the Brexit process despite the new deal announced by Prime Minister Boris Johnson and Europe's leaders.

Jo Swinson said Thursday she is "more determined than ever" to stop Brexit and to "give the public the final say."

The party is in favor of holding a second referendum on the Brexit question. Its policy is also to halt the Brexit process by revoking the Article 50 letter that triggered it if Swinson becomes prime minister.

Johnson says Britain has reached a "great" new deal, but the government is expected to struggle to get it approved by Parliament.

EU Brexit negotiator Michel Barnier says that British Prime Minister Boris Johnson told the EU he is confident he can get a deal through the House of Commons.

Johnson had a phone call with EU Commission President Jean-Claude Juncker Thursday morning and soon after, both sides announced the breakthrough outline deal.

Barnier was in the room when the leaders called each other and said Johnson "told President Juncker this morning that he believed he was able to get the deal approved," adding Johnson said he was "confident about his capacity to convince a majority."

UK Labour Party leader Jeremy Corbyn has condemned the Brexit deal brokered between Prime Minister Boris Johnson and the European Union as "even worse" than the settlement reached by Johnson's predecessor that was repeatedly rejected by British lawmakers.

Corbyn says in a statement that: "From what we know, it seems the Prime Minister has negotiated an even worse deal than Theresa May's, which was overwhelmingly rejected."

He says the "sell out deal won't bring the country together and should be rejected. The best way to get Brexit sorted is to give the people the final say in a public vote."

With Johnson's Northern Irish allies the Democratic Unionist Party currently rejecting the deal, the prime minister will likely need support of some pro-Brexit Labour lawmakers to get the deal through Parliament.

The European Union's chief Brexit negotiator says the deal with Britain answers the uncertainty created by Brexit and added "we have delivered, and we have delivered together."

In a first reaction, Michel Barnier said that Britain now agrees to pay its financial commitments to the EU, something which has been estimated at around 39 billion pounds.

EU Commission President Jean-Claude Juncker says in a letter that member nations should back the Brexit deal agreed early Thursday and that the 27 member states are "best served by an orderly and amicable withdrawal of the United Kingdom from our Union."

He adds: "Our hand should always remain outstretched as the United Kingdom will remain a key partner."

"I believe it is high time to complete the withdrawal process and move on as swiftly as possible to the negotiation on the European Union's future partnership with the United Kingdom," he said in a letter to EU Council President Donald Tusk Thursday.

Even if the United Kingdom leaves by the of the month, both sides will have to negotiate a new trade agreement for years to come.

Northern Ireland's Democratic Unionist Party says it remains opposed to the outline Brexit deal struck between the UK and the European Union.

The party, a key ally of British Prime Minister Boris Johnson, says it stands by a statement issued earlier by leader Arlene Foster and her deputy Nigel Dodds. They said the DUP "could not support what is being suggested on customs and consent issues."

The party said Thursday its position had not changed.

Arrangements are key to guaranteeing an open border between the UK's Northern Ireland and EU member Ireland, which has been the main obstacle to a Brexit deal.

Without the support of the DUP's 10 lawmakers, Johnson may struggle to get his deal ratified by the UK Parliament.

The pound has surged on news that the European Union and Britain have reached a provisional deal on Brexit.

The currency, which has been volatile over the past week on conflicting reports of progress, jumped to $1.2934 from $1.2805 earlier in the morning.

European Commission President Jean-Claude Juncker tweeted "We have one! It's a fair and balanced agreement for the EU and the UK and it is testament to our commitment to find solutions."

British Prime Minister Boris Johnson tweeted that the two sides had struck a "great new deal" and urged UK lawmakers to ratify it in a special session on Saturday.

European Union and British negotiators have agreed on an outline Brexit deal which still needs to be backed by EU member states and by the respective parliaments.

European Commission President Jean-Claude Juncker tweeted "We have one! It's a fair and balanced agreement for the EU and the UK and it is testament to our commitment to find solutions."

British Prime Minister Boris Johnson tweeted that the two sides had struck a "great new deal" and urged UK lawmakers to ratify it in a special session on Saturday.

Juncker said he would recommend the 27 EU nations to endorse the deal during their summit later Thursday.

An election for Gibraltar's 17-seat parliament is taking place under a cloud of uncertainty about what Brexit will bring for the speck of British territory on Spain's southern tip.

The Rock's about 34,000 residents didn't want to leave the European Union — in the 2016 referendum, 96% percent voted to stay. But they are bracing to be hit hard by it.

Gibraltar relies heavily on thousands of European workers who every day cross the border from Spain, which is in the EU.

The international operations of online gambling companies, whose operations account for around 25 percent of Gibraltar's economy, need access to the EU market.

The Socialist Labour Party is seeking a third consecutive term in government in Thursday's ballot.

European Union nations are still waiting for a text of any tentative agreement between the EU and the Britain only hours before the start of a key EU summit.

A senior EU official said that "we didn't get the text of an agreement between the (European) Commission and the UK government," making it impossible for the EU member states to assess it.

The official, who spoke on the condition of anonymity because the talks were still going on, said that the member states "will have to consider our options in light of the situation. Maybe we will have a deal, maybe not."

The European Union says Brexit negotiations are plowing on after intense talks in recent days, as EU leaders converge on Brussels for a key summit aimed at sealing a new divorce agreement.

Andreeva says that "every hour and minute counts" prior to the summit, set to start at around 1300 GMT (9 a.m. EDT), and is underlining that "we want a deal.

The UK is currently due to leave the EU on October 31.

A British government minister says negotiations will continue to hammer out a Brexit deal after a key ally, the Democratic Unionist Party, said it can't support the current draft.

Jenrick says the government wants to provide "sufficient comfort for the DUP and unionists in Northern Ireland to feel that the arrangements we would put in place with this deal are sufficient to give them comfort to support it."

He says Prime Minister Boris Johnson and his team will keep negotiating "with all parties, including with the DUP."

Johnson is scheduled to travel to Brussels later Thursday for a European Union summit at which leaders hope to approve a Brexit deal.

German Chancellor Angela Merkel says that an agreement on Brexit is still possible, but that it hasn't yet been reached.

Merkel said Thursday in parliament that "we're on a better path than before, but we have not yet reached the goal."

Merkel gave a speech in Germany's Reichstag before traveling to Brussels to attend a European Union summit on Brexit.

She stressed that an "agreement is still possible," which is, "why we need to continue to do everything to bring the negotiations to a successful end."

Support from the Democratic Unionist Party is key to Johnson's plan to get an agreement approved by parliament. But DUP leader Arlen Foster and the party's parliamentary chief Nigel Dodds say they "could not support what is being suggested on customs and consent issues."

Those arrangements are key to guaranteeing an open border between the UK's Northern Ireland and EU member Ireland — the main obstacle to a Brexit deal.

Without the DUP's support, any deal is unlikely to be ratified by the UK Parliament.

Foster and Dodds said they would continue to work with the UK government to get a "sensible" deal.

British Prime Minister Boris Johnson and his 27 counterparts from across the European Union are converging on Brussels for a summit they hope will finally lay to rest the acrimony and frustration of a three-year divorce fight.

Yet high anxiety still reigned on Thursday morning with the last outstanding issues of the divorce papers still unclear and Johnson uncertain whether his allies at home will back the compromises he needs to make a deal.

Technical negotiators again went into the night Wednesday to fine tune customs and VAT regulations that will have to regulate trade in goods between the Northern Ireland and Ireland, where the UK and the EU share their only land border.

The summit starts midafternoon and is slated to end some 24 hours later.