The Latest: Pelosi rejects 'big down payment' for Trump wall 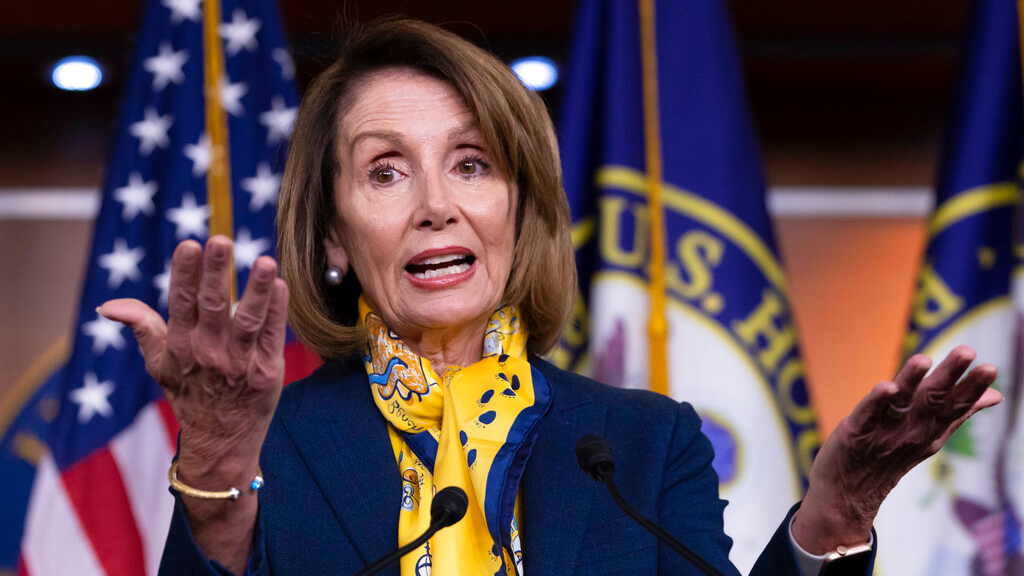 Speaker of the House Nancy Pelosi, D-Calif., talks to reporters a day after officially postponing President Donald Trump's State of the Union address until the government is fully reopened, at the Capitol in Washington, Thursday, Jan. 24, 2019. (AP Photo/J. Scott Applewhite)

The Latest on President Donald Trump, Congress and the partial government shutdown (all times local):

House Speaker Nancy Pelosi is rejecting the idea of providing "some big down payment" for President Donald Trump's border wall as part of a solution to the partial government shutdown.

Pelosi on Thursday spoke after Trump suggested a "reasonable" installment on such a barrier might be a way to solve the impasse. She suggested the idea was not a serious one.

She told reporters: "I hope that doesn't mean some big down payment." She said, "That is not a reasonable agreement between the senators."

Asked whether she knows the size of a down payment that Trump might find reasonable, Pelosi replied, "I don't know if he knows what he's talking about."

President Donald Trump says he's "just honored" that almost all Senate Republicans voted for his proposal to trade funding for a U.S.-Mexico border wall for temporary protections for some immigrants, even though lawmakers rejected the bill.

It was one of two measures designed to end the partial government shutdown that failed in the Senate on Thursday. Democrats sponsored the second bill.

Fifty of 53 Senate Republicans voted for the Trump proposal.

Speaking at the White House, Trump said, "I just really want to thank the Republicans for holding." He added that he was "just honored that almost all of the Republicans voted for our bill."

Trump also praised Sen. Joe Manchin of West Virginia, who was the only Democratic senator who voted for Trump's plan.

The White House says President Donald Trump will not accept a short-term deal to reopen the government unless it includes "a large down payment" for his promised border wall.

The statement from White House spokeswoman Sarah Huckabee Sanders on Thursday came as Senate Republican leader Mitch McConnell and Senate Democratic leader Chuck Schumer were meeting to try to hash out a solution.

Earlier Thursday, the Senate rejected competing Democratic and Republican proposals for ending the 34-day partial government shutdown, which is the longest in the nation's history.

Sanders says the Senate leaders are trying to see "whether or not they can work out of the deadlock." But she says a three-week continuing resolution "would only work if there is a large down payment on the wall."

About two dozen House Democrats got a lesson in Senate etiquette and national politics as they trooped over to watch the Senate vote on dueling bills to reopen the government.

Both bills went down in defeat.

The group, many of them new House members, appeared in the chamber Thursday to provide "solidarity" with senators who voted to end the partial government shutdown. The vote came as 800,000 federal workers faced a second missed paycheck. Democratic Rep. Ilhan Omar of Minnesota said the group had been prepared to chant, "Do the right thing," but Senate officials warned them to remain quiet and behind a railing where staff usually sits.

Senate Democrats lined up along the rail to give hugs and say hello.

Republicans controlling the Senate have scuttled a Democratic attempt to temporarily reopen the shuttered portions of the federal government.

The measure would have reopened agency doors through Feb. 8 to give bargainers time to seek a budget accord, an approach that GOP leaders tried last month — only to be undercut by President Donald Trump.

Trump is refusing to reopen the government until he gets a deal on funding for his long-sought border wall.

The Democratic measure had already passed the House, but fell short Thursday of the 60 votes required in the Senate to defeat a GOP filibuster.

Polls have shown that the public is blaming Trump for the shutdown and his approval numbers have sunk as the impasse drags on. The partial government shutdown is now in its 34th day. Federal workers are on the verge of missing another paycheck Friday.

Senate Democrats have blocked President Donald Trump's request for $5.7 billion to construct his long-sought wall along the U.S-Mexico border, as a partial government shutdown continues for a 34th day.

The partisan 50-47 tally fell well short of the 60 votes required to advance the measure over a Democratic filibuster. The $350 billion-plus government-wide funding bill represented the first attempt by Republicans controlling the Senate to reopen the government since the shutdown began.

The demise of the measure and likely defeat of a Democratic alternative Thursday comes despite increasing urgency felt by lawmakers to end the shutdown. It leaves Washington with no obvious path out of the impasse despite mounting pressure.

The measure would have also provided three years of continued protection against deportation for 700,000 immigrants brought to the U.S. illegally as children.

Pelosi told reporters she's "still optimistic" Senate Republicans will vote Thursday for the Democratic bill that would temporarily reopen government while talks are held over Trump's demand for $5.7 billion to build the border wall.

The speaker said House Democrats are putting together a new border security package that could provide a step toward a compromise. It will include money for fencing, technology, personnel and other measures, but not Trump's proposed wall.

Trump responded in real time on Twitter saying, "very simply, without a Wall it all doesn't work.... We will not Cave!"

Some 800,000 federal workers are set to miss another paycheck Friday. The government is in its 34th day of a partial shutdown.

Either measure would reopen federal agencies and pay 800,000 federal workers who are days from missing yet another paycheck.

Twin defeats might spur the two sides into a more serious effort to reach an agreement. With the impact of the shutdown becoming increasingly painful, lawmakers say they're willing to compromise on border security and immigration policy.

Trump says 'not much headway' in talks as shutdown drags on