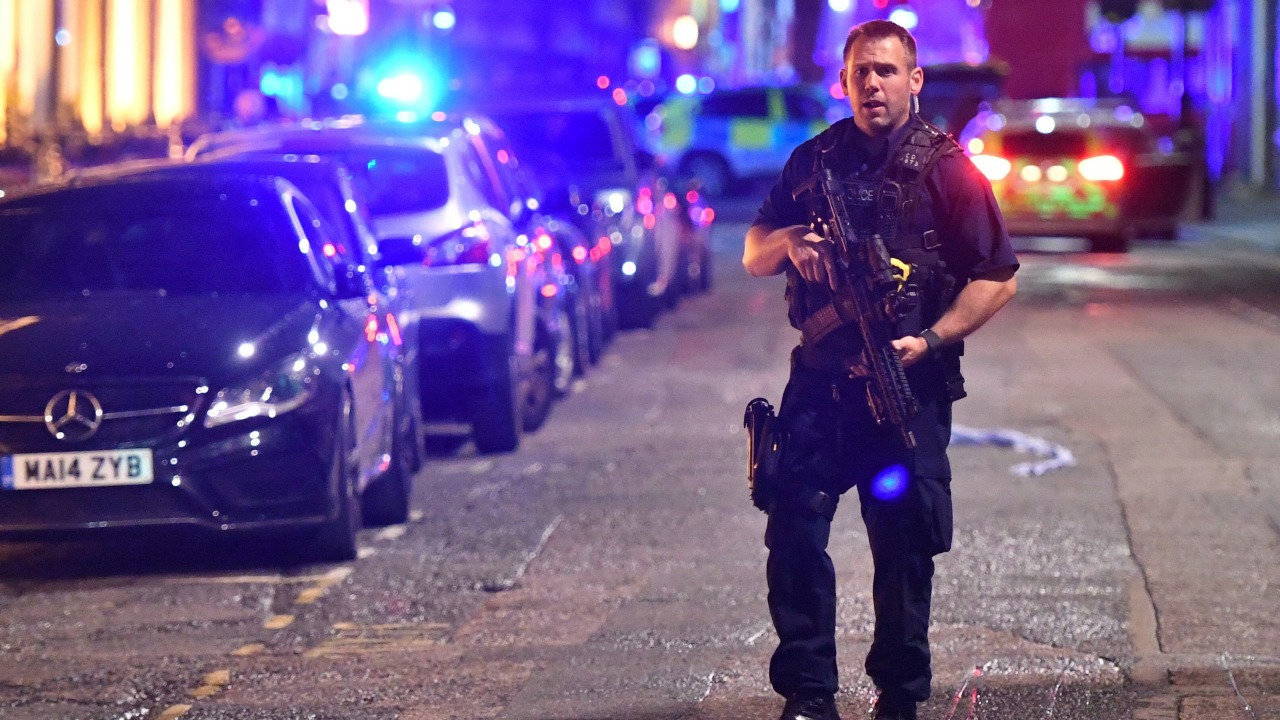 An armed police stands on Borough High Street as police are dealing with an incident on London Bridge in London, Saturday, June 3, 2017. Witnesses reported a vehicle hitting pedestrians and injured people on the ground. (Dominic Lipinski/PA via AP)

LONDON — The Latest on an incident on London Bridge (all times local):

Police say a hit-and-run and stabbings on and near London Bridge have been officially declared a "terrorist incident."

Armed officers flooded the busy area of the city after a van struck multiple people on the bridge. Witnesses also reported seeing people being stabbed by at least one man.

Police say the incidents occurred on the bridge and at Borough Market a short distance away.

The force initially said they were also responding to a reported third incident, in the Vauxhall area of London. But they said later that turned out to be an unrelated stabbing.

Police say they are working with Royal Naval Lifeboat Institution to evacuate public from the London Bridge incident.

Police say a vehicle reportedly ran down pedestrians on London Bridge, and there were reports of stabbings nearby.

The BBC says more than one person has been killed.

British Prime Minister Theresa May says the incident "is being treated as a potential act of terrorism."

British Prime Minister Theresa May says an incident involving a vehicle and reported stabbings in London "is being treated as a potential act of terrorism."

May says it is a "fast-moving investigation" and her thoughts are with those caught up in the "dreadful events."

Police say a vehicle reportedly ran down pedestrians on London Bridge, and there were reports of stabbings nearby. They have also responded to an incident in another area of London, Vauxhall.

The BBC says more than one person has been killed.

Jeremy Corbyn, the head of the Labour Party, said on Twitter: "Brutal and shocking incidents reported in London. My thoughts are with the victims and their families. Thank you to the emergency services."

Downing Street says Prime Minister Theresa May will chair a meeting of the government's emergency response committee on Sunday.

A spokesman for May says the prime minister is in contact with officials and is being regularly updated.

May has not commented yet but in the past she has convened her emergency security Cabinet known as Cobra after major incidents.

Britain's official terror threat had recently been lowered from "critical" after a bombing killed 22 people at an Ariana Grande concert in Manchester.

London police say they are responding to reports that a vehicle hit pedestrians on London Bridge and that there were stabbings at busy Borough Market nearby.

Soon after they responded to another incident in the Vauxhall area, over a mile away.

The Metropolitan Police says armed officers have been sent to the scenes and shots were fired. They did not say if officers fired the shots.

The force has tweeted a warning telling people in the area to run to safety, hide and then call police if it is safe to do so.