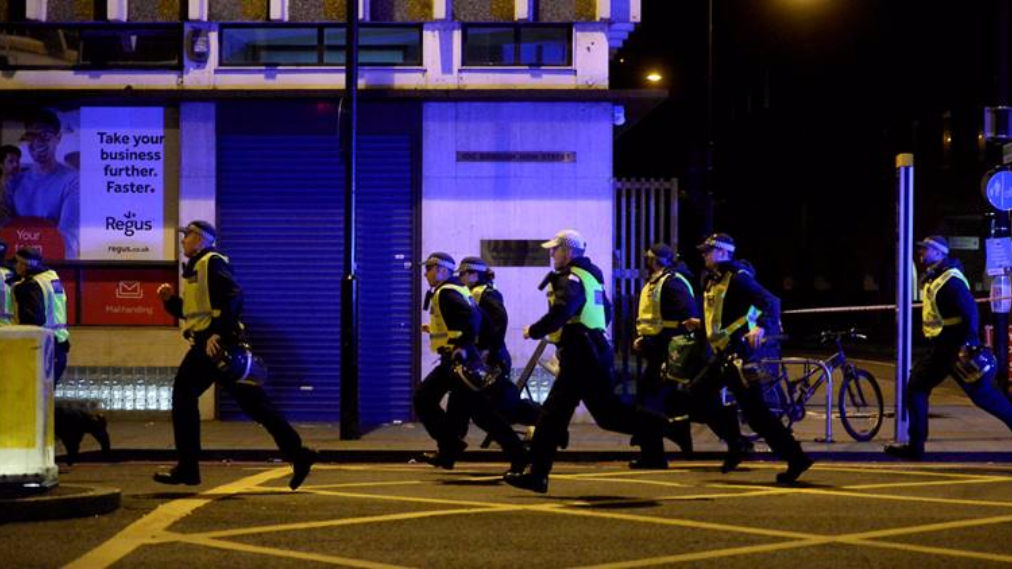 LONDON (AP) — The Latest on the attacks in the London Bridge area (all times local):

Pope Francis has offered prayers for the victims of the London attacks during a traditional Sunday blessing following Mass that marked the Pentecost holiday.

Francis invoked prayers that the Holy Spirit "grants peace to the whole world and heal the wounds of war and of terrorism, which also last night, in London, struck innocent victims."

The pope asked for prayers for the victims and their family members caught up in the attack in London Bridge Saturday, which left seven dead and almost 50 wounded.

British media are reporting an armed police operation taking place in east London. Scotland Yard declined to comment about the reports of the raid, or say whether the operation was linked to Saturday's attacks in London Bridge.

Footage from Sky News and social media show a police cordon around an apartment building in Barking, a suburb in east London.

Authorities have said officers shot dead all three attackers in Saturday's night's attack, which left seven people dead, but that the investigation is continuing.

—This version corrects the day of the London Bride attack to Saturday.

Spain's Foreign Ministry says that one Spaniard is among the dozens wounded in the London attacks.

A ministry spokesperson tells The Associated Press that the Spanish man has been taken to a hospital where he is being treated for wounds described as not serious. The spokesperson spoke anonymously in line with ministry policy.

Spain's King Felipe VI and Prime Minister Mariano Rajoy have expressed their condolences for the victims of the attacks.

The Spanish Royal Family wrote on Twitter: "The British people will overcome this barbarism and senselessness. We are united today in pain and in our tireless defense of freedom."

Iran's Foreign Ministry spokesman is condemning the "terrorist attacks" in London and expresses sympathy for the families of the victims.

State TV is reporting that Bahram Ghasemi says an increasing number of extremist attacks is "an alarming signal for the global community."

He condemned terrorism in "all shapes and aspects regardless of purpose and motive."

Prime Minister Theresa May has strongly condemned the recent terror attacks in London and Manchester, saying "enough is enough" — and tougher measures are needed as "terrorism breeds terrorism" and attackers copy each other.

May was speaking a day after three attackers left seven dead in an onslaught in the London Bridge area — the third deadly attack in Britain since March.

She said that while the recent attacks are not connected, they are all bound by the "single evil ideology" that says Western values are incompatible with Islam.

She added that British authorities have disrupted five credible plots since March.

The One Love Manchester event will take place as planned but with extra protection.

Assistant Chief Constable Garry Shewan said Sunday there will be additional security checks and everyone will be searched at the Manchester event. Armed police will also attend.

Grande was performing when a bomber attacked her Manchester Arena concert on May 22, killing 22 people. She will be joined at Sunday's benefit by Katy Perry, Cold Play, Justin Beiber and others.

Grande has been meeting with some attack victims being treated in Manchester hospitals in recent days.

Russian President Vladimir Putin says the London Bridge attack is "shocking in its cruelty and cynicism."

Putin made the statement in a telegram of condolences Sunday to British Prime Minister Theresa May, according to the Kremlin website.

The statement said Putin "expressed his confidence that the response to the incident should be the escalating of joint efforts in the fight against the forces of terror around the world."

Russia has suffered many attacks over the past two decades, most recently the April 3 suicide bombing on a St. Petersburg subway train that killed 16 people.

The rightwing UK Independence Party has broken with other parties by announcing it will continue its general election campaign despite the terrorist attack.

Party chief Paul Nuttall said Sunday that a second disruption to the campaign similar to the one that followed the Manchester attack on May 22 is "precisely what the extremists would want us to do."

He said that could lead to more attacks.

Most parties have suspended campaigning before the June 8 general election.

London's police chief says the death toll from the terror attack in London Bridge has risen to seven.

Metropolitan Police Commissioner Cressida Dick told reporters that seven members of the public have died, in addition to the three suspects who used a van to attack people on London Bridge then stabbed others in the nearly Borough Market Saturday night.

The three attackers were shot dead by police within minutes.

Dick said police believed that the incident was under control, but a large police cordon remained in place in the area, south of the Thames, Sunday.

She added that police patrols will be increased in London, including those by armed officers.

Dozens of heavily-armed London police have fanned out across Borough Market and the streets outside London Bridge train station.

Many of the police were wearing face masks as they arrived Sunday morning to patrol the scene, where attackers using a van and knives left six people dead and more than 40 others injured. Police say officers shot dead three attackers within minutes of receiving the first call Saturday night.

Britain's Labour Party and the Scottish National Party have announced a suspension in campaigning for the general election because of the terror attack in the London Bridge area Saturday that left six dead.

They joined the Conservative Party in halting campaigning ahead of the June 8 vote.

There was a similar hiatus after the attack in Manchester killed 22 people last month. It is not clear when national campaigning will resume.

Prime Minister Theresa May had called the snap election in a bid to bolster her party's strength in Parliament ahead of Brexit negotiations.

European leaders have voiced solidarity with the British government and expressed condolences to the victims in the London attacks that left six dead.

Spanish Prime Minister Mariano Rajoy wrote in Spanish on his Twitter account: "I am following with great concern the attacks in London, sad news. Our solidarity and support for the British people and authorities."

Italian Premier Paolo Gentiloni tweeted Sunday: "Solidarity with the British government and a shared effort against terrorism. We are united in memory of the victims."

Gentiloni was host of the Group of Seven summit in Sicily on May 26-27 during which leaders pledged new measures to combat terrorism including pressuring internet providers and social media to more swiftly remove terror propaganda from the web.

Philippine President Rodrigo Duterte has expressed his sympathies to the victims of the London attacks, even as his troops struggled to end a deadly siege of a southern city by Islamic State group-aligned local militants.

Duterte's spokesman Ernesto Abella says "acts such as these touched not only the people of London, they also touched all peace-loving people in the global community."

Indonesia, the world's most populous Muslim nation, also condemned the attacks and reaffirmed its support and solidarity with Britain in its efforts to combat "radicalism and terrorism."

Indonesia too has been battling Muslim militants groups that have staged attacks across the sprawling archipelago, including in the capital Jakarta.

In a statement Sunday denouncing the "abominable and cowardly" attack, Macron said France will continue fighting "terrorism with all our strength alongside Britain and all other countries concerned."

Macron said French authorities would work to help the French victims and increase security for French voters in London casting ballots in legislative elections starting Sunday "to show the force of democracy in the face of enemies of freedom."

London has a large French population and attracts many French visitors. French people were also among those injured in the attack on Westminster Bridge in March.

France is still under a state of emergency after a string of Islamic extremist attacks.

German Chancellor Angela Merkel is expressing solidarity with the people of London following the attacks in the British capital.

Merkel said in a statement Sunday that she learned with "sadness and dismay" of the attacks in the London Bridge area Saturday night.

She said that "today, we are united beyond all borders in horror and sorrow, but also in determination."

She stressed that "in the fight against every form of terrorism, we stand firmly and with determination at Britain's side."

Britain's Conservative Party has announced that it is suspending national campaigning ahead of the general election on June 8 as a result of the terror attacks in London.

Prime Minister Theresa May's party said there will be no national campaigning Sunday. It is not clear if campaigning will resume in the final days before the vote.

The opposition Labour Party has not yet announced its plans for Sunday.

Saturday night's attack on London Bridge, which left 6 killed and dozens injured, came just days ahead of the election.

London Mayor Sadiq Khan says some of those injured in the attacks on the city are in "critical" condition.

Six people were killed and more than 40 people were injured and treated at hospitals after attackers used a van to barrel into pedestrians on London Bridge, then attacked people in bars and restaurants nearby with knives on Saturday.

Khan said Sunday that Londoners should all remain vigilant as the terrorist threat level is severe. But he added: "I'm reassured we are one of the safest global cities in the world."

Khan says the militants want to disrupt Britain's democracy and hamper plans for voting in the general election June 8.

He praised emergency services and said police would make a statement after an emergency cabinet meeting.

He says in a brief statement after returning from Europe that his thoughts are with the families of the deceased and offered prayers for the injured.

Police specialists are collecting evidence in the heart of London after a series of attacks described as terrorism killed six people and injured more than 30 others.

Prime Minister Theresa May planned to chair an emergency security Cabinet session Sunday to deal with the crisis.

The assault began when a van veered off the road and barreled into pedestrians on London Bridge. Witnesses say three men fled the van with large knives and attacked people at bars and restaurants in nearby Borough Market.

More than 30 victims are being treated at London hospitals and a number of others suffered less serious injuries.

The Metropolitan Police force declared the attacks "terrorist incidents." Assistant Commissioner Mark Rowley says while they believe all the attackers were killed, the investigation continues.