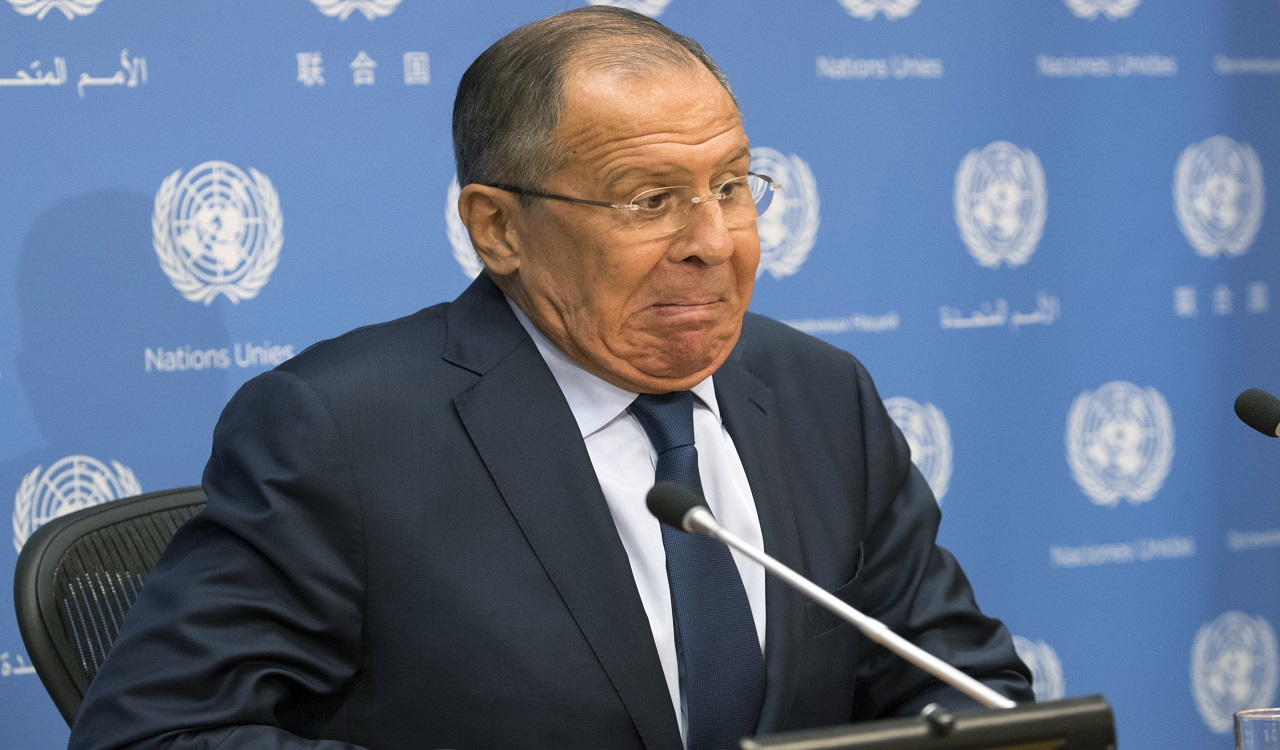 Russian Foreign Minister Sergey Lavrov reacts as he sits on a wobbly chair as he arrives for a news conference at United Nations headquarters, Friday, Sept. 22, 2017.

The Latest on the U.N. General Assembly (all times local):

Russia's top diplomat says "we have to calm down the hotheads" in the North Korean nuclear dispute and work to promote contacts between the Trump administration and Kim Jong Un's government.

Foreign Minister Sergey Lavrov said it was "unacceptable to simply sit back and to look at the nuclear and military gambles of North Korea, but it is also unacceptable to start the war on the peninsula."

Lavrov told a news conference Friday on the sidelines of the U.N. General Assembly's ministerial meeting that he would welcome mediation, saying "the mediators could be one of the neutral European countries."

He added that U.N. Secretary-General Antonio Guterres talked about mediation and said if he received such a request, "he would try to fulfill that."

Lavrov was responding to a question about U.S. President Donald Trump's combative speech Tuesday. The president threatened "to totally destroy North Korea" if the U.S. is forced to defend itself or its allies. In response, Kim called Trump "deranged" and saying he will "pay dearly" for his threats.

Lavrov said there are many people "who would like to try not to pursue" military action and sanctions, but rather try peaceful resolution.

He said he had no new initiatives to bring the two sides together, explaining that he believes "the potential" for the Russian-Chinese freeze-for-freeze proposal "is not yet exhausted." That would halt North Korean nuclear and missile tests in exchange for the U.S. and South Korea stopping their joint military exercises. The Trump administration has rejected it.

Cuba's top diplomat says his country so far hasn't unearthed any information about who or what caused a mysterious series of health incidents that have affected U.S. and Canadian diplomats in Havana.

Foreign Minister Bruno Rodriguez Parrilla told the U.N. General Assembly on Friday that early results from its investigation have to date "found no evidence whatsoever that could confirm the causes or the origin" of the problems.

At least 21 Americans and several Canadians in Havana's diplomatic community have suffered from symptoms believed to have come from some sort of sonic attack. The symptoms include hearing loss and brain damage.

U.S. Secretary of State Rex Tillerson has described the incidents as "health attacks."

Cuba has denied any involvement or knowledge of them. Rodriguez reiterated that denial Friday.

Mark Lowcock told a high-level event on Yemen on the sidelines of the U.N. General Assembly's ministerial meeting Friday that this represents a 60 percent increase from the average of 4.4 million people who received food assistance in the first six months of the year.

He said the increase was partially a result of much higher imports in July. He urged all countries "to do everything they can to sustain this trend," especially by ensuring ship clearances and smooth operations at the port of Hodeida.

Despite the delivery, Lowcock said Yemen "is facing the world's largest humanitarian crisis, with nearly 21 million people in need of emergency aid or protection," most of them children.

He said the threat of famine still looms.

Peter Maurer, president of the International Committee of the Red Cross, said Yemen also faces the world's largest cholera outbreak since numbers have been recorded, with 700,000 suspected cases reported as of Friday.

Bhutan's leader has punctuated his U.N. General Assembly speech with moments of silence to honor people afflicted by hurricanes, poverty and terrorism.

He noted that his tiny, heavily forested Himalayan nation is a rare country that absorbs more of the greenhouse gas carbon dioxide than it emits.

Tobgay also said Bhutan has reduced acute poverty by half and aims to cut it significantly more in the next five years.

Bhutan is known for measuring "gross national happiness," instead of traditional indicators of prosperity such as gross domestic product.

North Korean leader Kim called Trump a what? A 'dotard'