The Latest: South Africa's president says 'I will be out' 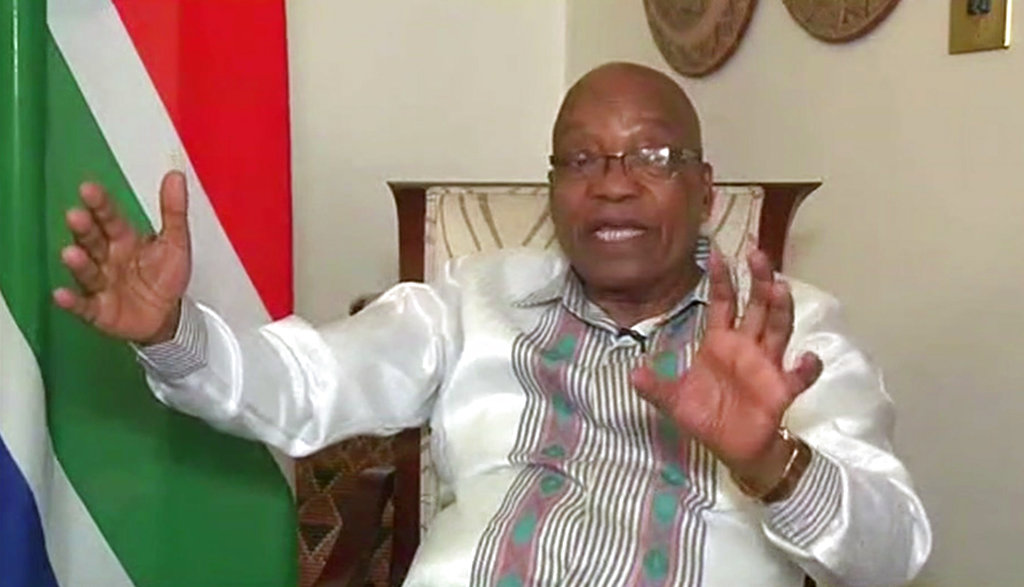 The Latest on South Africa's leadership crisis (all times local):

South African President Jacob Zuma says "I will be out" if parliament votes against him in a motion of no confidence set for Thursday.

Zuma's comment in a live interview on state broadcaster SABC suggests that he will not obey a ruling party order to leave office by the end of Wednesday.

The ruling African National Congress says it will move to oust Zuma in a parliamentary vote if he does not quit voluntarily.

Zuma says he has been "victimized" and that he disagrees with the ANC party's efforts to remove him. He says he was willing to resign but wanted to stay a few more months on office.

He says he will make a statement later.

South African President Jacob Zuma says ruling party leaders have not given him clear reasons for why he should resign and he calls his treatment "unfair."

Zuma broke his silence Wednesday in a live interview with state broadcaster SABC as the nation awaited word on whether he would obey a ruling party order to leave office.

Zuma says the ruling African National Congress has not followed party procedures in trying to unseat him. The ANC wants parliament to vote Thursday on a motion of no confidence if he doesn't resign Wednesday.

"I need to be furnished on what I've done," Zuma says. "What is this hurry?"

The president has not commented in the ongoing interview on whether he will resign.

The speaker of South Africa's parliament wants to hold a motion of no confidence in President Jacob Zuma on Thursday afternoon.

The office of Baleka Mbete says the timing of the vote by open ballot must be agreed upon by the parliament's program committee at a meeting later Wednesday.

However, resistance to Mbete's plan is not likely. Both the ruling African National Congress party and opposition parties are pushing for a parliamentary vote against Zuma, who has not responded to an order from his own party to leave office.

An opposition-sponsored vote of no confidence against Zuma had been scheduled in parliament for Feb. 22, but opposition parties wanted the event to be moved to this week.

Jackson Mthembu, a senior official in the African National Congress, says the party wants to resolve the country's leadership turmoil as soon as possible.

Mthembu says that under an accelerated timeline, parliament would vote to remove Zuma from office on Thursday unless he resigns before then, and that lawmakers would elect a new president immediately after the vote.

The ruling party wants Deputy President Cyril Ramaphosa to take over from Zuma, who has not responded to an ANC order to quit.

South Africa's ruling party says it is preparing for a parliamentary motion of no confidence against President Jacob Zuma on Thursday.

Paul Mashatile, a senior official in the African National Congress, says the aim of the vote is to remove Zuma so that Deputy President Cyril Ramaphosa can take over.

"We can no longer keep South Africa waiting," Mashatile says.

Zuma has been discredited by corruption scandals. Police have raided the home of a prominent business family with links to the president.

South African police have raided the residential compound of a business family suspected of using its ties to President Jacob Zuma to influence Cabinet appointments and land state contracts.

Agents from the Hawks, an elite police investigative unit, on Wednesday entered the compound of the Gupta family in Saxonwold, an affluent neighborhood in Johannesburg.

The raid happened as the ruling African National Congress Party awaited a response from Zuma after instructing him on Tuesday to quit office because of a series of scandals.

The Gupta business family has been a flashpoint for national anger over corruption in state enterprises during Zuma's tenure. A judicial commission is preparing to investigate the alleged graft.

Zuma and the Guptas deny wrongdoing.