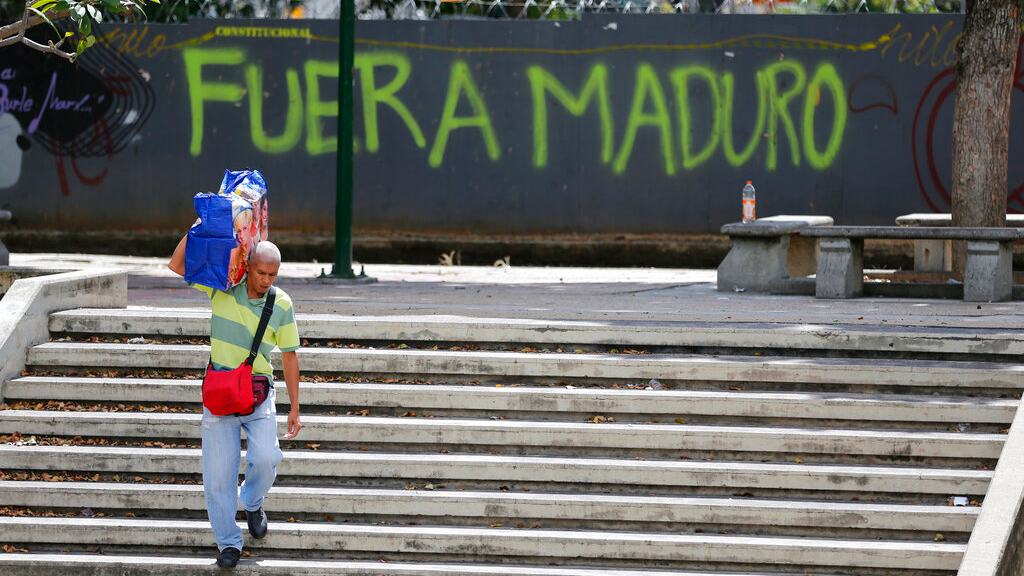 A man walks past graffiti on the wall of a vacant lot that reads in Spanish: "Get out Maduro," referring to President Nicolas Maduro in Caracas, Venezuela, Thursday, Jan. 24, 2019. (AP Photo/Fernando Llano)

Spanish Foreign Minister Josep Borrell says that Spain is pushing for the European Union to back Venezuelan opposition leader Juan Guaido if President Nicolas Maduro doesn't call elections by a deadline yet to be set.

The deadline is being discussed Friday by officials of the 28 countries in Brussels and Borrell says it should be "short and minimal," without further specifying.

He says there is wide support for the proposal, but that Spain is pushing for consensus.

"We are trying to look for a solution that avoids confrontation and more deaths," Borrell told reporters during a weekly government briefing.

The socialist minister and former president of the European Parliament says that fair elections can only be guaranteed with international observers.

A U.S. official says that some American diplomats and their families have headed in a caravan to the Venezuelan capital's airport amid diplomatic standoff with President Nicolas Maduro.

The official spoke to The Associated Press on the condition of anonymity because due to lack of authorisation to discuss sensitive security arrangements.

A letter written by a U.S. Embassy security officer requesting a Venezuelan police escort for 10 vehicles was leaked earlier Friday on social media.

Maduro on Wednesday gave the U.S. diplomats 72 hours to leave the country and close their hilltop embassy as he announced he was breaking diplomatic relations over the Trump administration's decision to recognise lawmaker Juan Guaido as interim president.

The Trump administration has rebuffed those demands and says it will keep the Embassy open. On Thursday it said it would reduce staffing levels over security concerns

Germany says it favors recognising Venezuela's opposition leader as the country's interim president unless there are free and fair elections soon.

Seibert said Germany is eager for the European Union to reach a common line on Venezuela at a meeting of diplomats in Brussels on Friday.

He told reporters in Berlin that "within the framework of upcoming EU talks the German government favors recognising Juan Guaido as the country's interim president unless there are prompt free and fair elections."

The U.N. human rights chief is calling for independent investigations into violence linked to protests in Venezuela, allegedly involving excessive use of force by security or pro-government forces that reportedly left at least 20 people dead.

Michelle Bachelet's office in Geneva said that she "urged all sides to conduct immediate talks to defuse the increasingly incendiary atmosphere."

She said an independent, impartial probe was needed for any violence leading to death or injury, whether caused by excessive force by security forces or armed groups — pro-government or not.

The office of the U.N. High Commissioner for Human Rights said Friday "at least 20 people are reported by credible local sources to have died after allegedly being shot by security forces or members of pro-government armed groups during demonstrations Tuesday and Wednesday."

It cited reports about "well over 350" demonstrators being detained, nearly all in January.

The father of an opposition leader claiming Venezuela's interim presidency is calling for the military to drop their allegiance to Nicolas Maduro.

Juan Guaido, president of the opposition-led National Assembly, says he has constitutional legitimacy to guide Venezuela to a new presidential election.

His father, Wilmer Guaido, has lived in Spain for the past 16 years. Speaking on Antena 3 private television on Friday, he says that Venezuela's armed forces should be loyal to the country, but not to a specific leader.

"(Simon) Bolivar used to curse against soldiers who give their back to the people," Guaido said, referring to Venezuela's independence hero. "I think the military should choose the right side of history."

The father, who works as a taxi driver in the island of Tenerife, says he is proud because his son has taken a step forward to take power "from a usurper."

Indian officials say they are closely following the political crisis in Venezuela.

Opposition leader Juan Guaido's claim to the presidency has been recognised by the U.S. and other countries, a step that put them at odds with Russia, China and others who see the U.S. as interfering.

India Ministry of External Affairs spokesman Raveesh Kumar said Friday it was up to Venezuelans "to resolve their differences through constructive dialogue and discussion without resorting to violence."

Guaido's whereabouts have been a mystery since he was symbolically sworn in Wednesday.

Backed by Venezuela's military, President Nicolas Maduro went on the offensive against an opposition leader who declared himself interim president and his U.S. supporters, setting up a struggle for power in the crisis-plagued South American nation.

A defiant Maduro called home all Venezuelan diplomats from the U.S. and closed its embassy Thursday, a day after ordering all U.S. diplomats out of Venezuela by the weekend because President Donald Trump had supported the presidential claim of Juan Guaido. Washington has refused to comply, but ordered its non-essential staff to leave the tumultuous country.

The Trump administration says Maduro's order isn't legal because the U.S. no longer recognises him as Venezuela's legitimate leader.

Meanwhile, all eyes were on Guaido whose whereabouts have been a mystery since he was symbolically sworn in Wednesday.