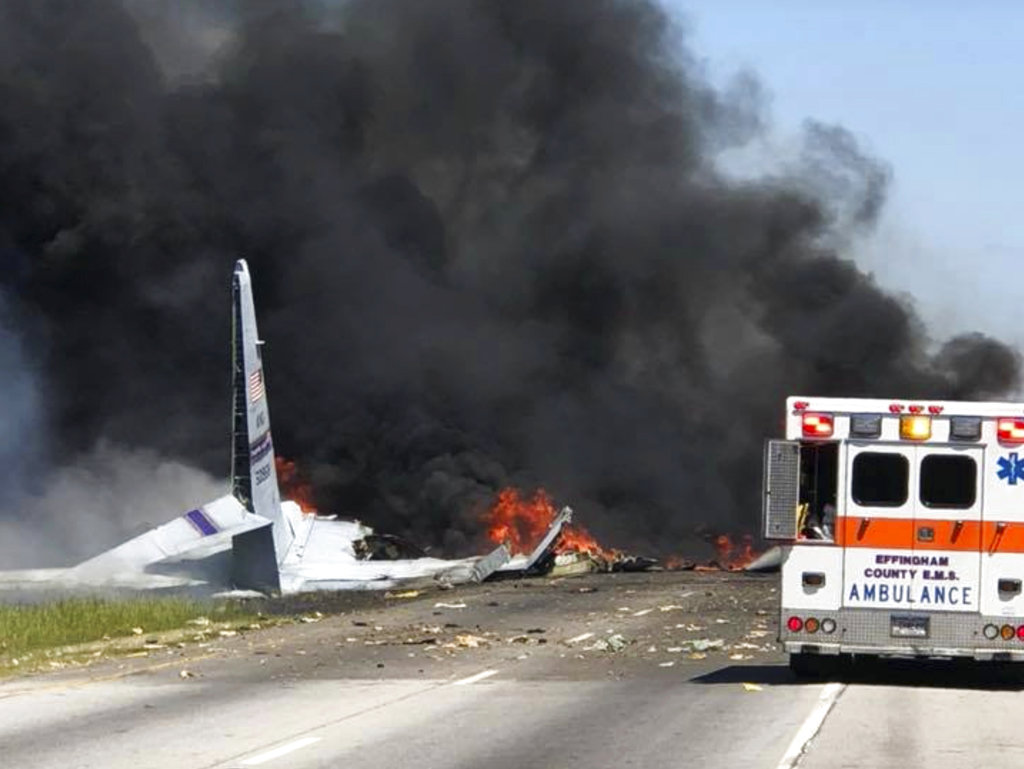 Black smoke rose into the sky from a section of the plane that appeared to have crashed into a median on the road. Firefighters later put out the blaze.

Capt. Jeff Bezore, a spokesman for the Georgia Air National Guard's 165th Air Wing, said the crash killed at least five people. He said he couldn't say how many people in total were on the plane when it crashed around 11:30 a.m.

The cause of the crash wasn't immediately known.

The Air Force said the plane belonged to the 156th Air Wing out of Puerto Rico, and Puerto Rico National Guard Spokesman Maj. Paul Dahlen told The Associated Press that all those aboard were Puerto Ricans who had recently left the U.S. territory for a mission on the U.S. mainland. He said initial information indicated there were five to nine people aboard the plane, which was heading to Arizona. He did not have details on the mission.

"We are saddened by the plane accident that occurred today in Georgia," Puerto Rico Gov. Ricardo Rossello said in a tweet. "Our prayers are with the families of the Puerto Rican crew."

The plane crashed onto state highway Georgia 21, about a mile from the Savannah/Hilton Head International Airport, said Gena Bilbo, a spokeswoman for the Effingham County Sherriff's Office.

"It miraculously did not hit any cars, any homes," Bilbo said. "This is a very busy roadway."

The crash caused a big fireball and scattered debris over a large area, Bilbo said.

A photo tweeted by the Savannah Professional Firefighters Association shows the tail end of a plane and a field of flames and black smoke as an ambulance stood nearby.

The only part of the plane that remained intact was the tail section, said Chris Hanks, the assistant public information officer with the Savannah Professional Firefighters Association. The tail section was sitting on the highway and the ground in front of it was black and littered with debris, he said.

The Savannah Air National Guard says the plane was doing a training mission when it crashed.

Savannah's Air National Guard base has been heavily involved in hurricane recovery efforts in Puerto Rico. In September 2017, it was designated by the Air National Guard as the hub of operations to the island in the aftermath of hurricanes Irma and Maria, the base announced at the time.

Savannah/Hilton Head International Airport said on social media that some flights were being affected though the crash happened off its property. The airport advised passengers to check with their airline for updated flight information.