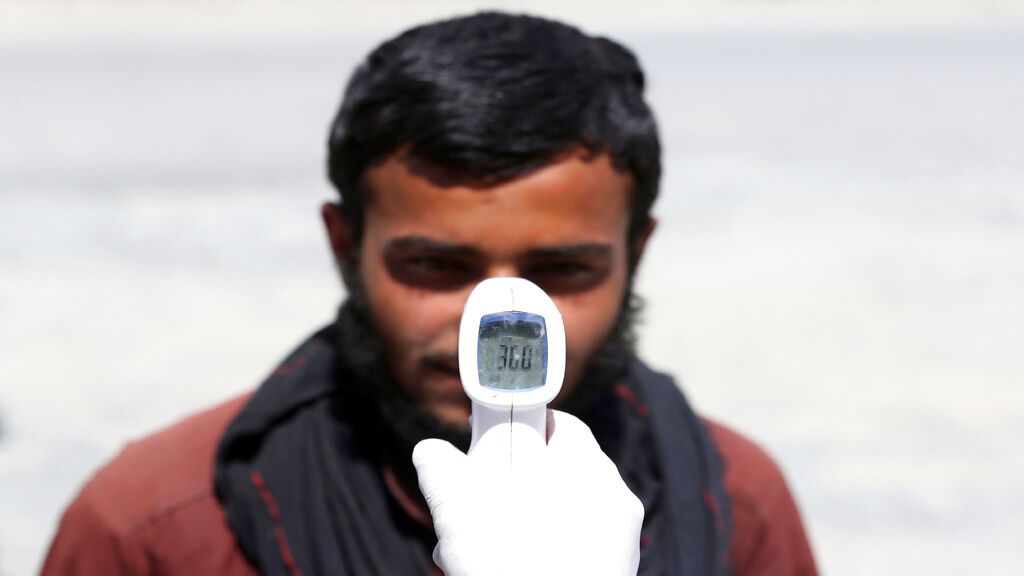 A health worker checks the temperature of car passengers in an effort to help stop the spread of the coronavirus, as they enter the city in the Paghman district of Kabul, Afghanistan, Sunday, May 3, 2020. (AP Photo/Rahmat Gul)

The Latest on the coronavirus pandemic. The new coronavirus causes mild or moderate symptoms for most people. For some, especially older adults and people with existing health problems, it can cause more severe illness or death.

TOP OF THE HOUR:

— A Swedish agency says the European Union is studying on a rapid schedule whether the drug remdesivir could be used for treatment.

— Italy counts down until restrictions are loosened after two months of nationwide lockdown, while South Korea and Spain will further loosen measure this coming week.

— Pope Francis calls for international cooperation on finding a vaccine.

STOCKHOLM — The Swedish national drug and medicine supervision agency says the European Union is investigating on a rapid schedule whether the use of the drug remdesivir could be allowed for treating the coronavirus within the 27-nation bloc following a similar decision in the United States.

The Swedish Medical Products Agency's infection department director, Charlotta Bergqvist, told Swedish broadcaster TV4 that the introduction of remdesivir with is now being studied with a high priority within the EU and a decision may be reached “in a few days.”

The US Food and Drug Administration recently authorised emergency use of remdesivir on people hospitalised with severe COVID-19. The drug was originally developed for treatment of Ebola and produced by the California-based Gilead Sciences Inc.

Clinical trials have showed the drug has helped to shorten the recovery time for people who were seriously ill.

ROME — Italians are counting down the hours until they regain some measures of personal freedom after two months of nationwide lockdown to contain Europe’s first outbreak of COVID-19.

Starting Monday, parks and public gardens can reopen for strolling, jogging or biking. But people will have to stay a meter apart, ruling out picnics and playgrounds.

Italians were already outside in large numbers Sunday, walking down streets and chatting on sidewalks. Many were equipped with masks, but in Rome, some lowered them to talk.

Experts advising the government have warned citizens against lowering their guard, and Premier Giuseppe Conte cautioned that freedoms could be curtailed if the rate of contagion starts rising again.

Restaurants and cafes will be allowed to offer customers takeout. Takeout coffee in Italy never really caught on in a big way, since knocking down a tiny espresso at the cafe’s counter is a time-honoured social tradition. So bars might have to scramble to order more plastic cups.

Brief funerals services are now allowed, but no more than 15 masked mourners can attend.

In Milan, some seats on trams had stenciled warnings saying they must be left open. Cash-strapped transit systems are pleading for aid from the central government to ensure enough drivers and vehicles to meet safety distancing rules.

Park says schools will have students back to their classrooms in phased steps. Currently, South Korean students are taking classes online.

VATICAN CITY — Pope Francis is calling for international collaboration in the search for a vaccine and treatment for COVID-19.

Speaking from the Apostolic Palace library on Sunday after delivering his blessing, Francis stressed the importance of guaranteeing “universal access to the essential technologies that allow every infected person, in every part of the world, to receive the necessary health care.”

Some cross-country research is already underway to develop a safe, effective vaccine, and scientists and doctors in various nations have been sharing experiences in using different drugs to treat patients.

The pope also invited faithful of all religions to spiritually unite in prayer, fasting and works of charity on May 14 to “implore God to help humanity to overcome the coronavirus pandemic.”

MADRID — Spaniards are enjoying their second day of outdoor exercise while preparing for further loosening of lockdown measures.

Spanish health officials reported the lowest daily death toll in six weeks on Sunday and new confirmed infections dropped to a low not seen since a state of emergency was declared March 14.

Barcelona’s beachfront promenade was again packed, making it impossible in some spots to maintain the two-metre social distancing rule.

Spain will majorly rollback lockdown measures Monday. Eateries will be able to serve customers who have placed takeaway orders. Shops under 400 square meters can reopen for appointments as long as there is always a one-to-one ratio of customer to worker. Face masks will be obligatory on public transport.

BANGKOK — Residents of the Thai capital Bangkok strolled in its parks, booked haircuts and stocked up on beer as they enjoyed their first day of eased restrictions that were imposed weeks ago to combat the spread of COVID-19.

The top perk in a city famous for its eateries may have been the reopening of restaurants. But it was not clear how many were actually serving seated customers again, since guidelines would make it hard for many to turn a profit.

There was also a partial lifting on the sale of beer and other alcoholic drinks that will allow takeaway purchases, even while bars remain closed.

Ministry spokesman Wahid Mayar called the results from Kabul “concerning” and said people must remain in their homes to slow the spread. He said the country’s actual infection rate would likely increase as testing becomes more available.

Afghanistan has thus far taken close to 12,000 samples, of which more than 2,700 have been positive, and 85 people have died.

Kabul and most other cities are in lockdown.

Afghanistan has also received more than 250,000 refugees who have returned from Iran, the country hardest hit by coronavirus in the region. There are growing fears that the country’s health care system, devastated by four decades of war, will be woefully unprepared for a major outbreak.

More than half of the 10,633 new cases reported were in Moscow, where concern is rising about whether the capital’s medical facilities will be overwhelmed.

Alexander Gintsburg of the Gamaleya Research Center for Epidemiology and Microbiology was quoted by the Interfax news agency as saying the case increase does not indicate a deepening pandemic, noting that testing has doubled over the past 10 days.

Russia has recorded more than 134,000 coronavirus infections overall and 1,420 deaths.

UNICEF says the polio campaigns are on hold in Syria, Sudan, Yemen and Iraq, while measles vaccinations are suspended in Iraq, Lebanon, Yemen and Djibouti.

Routine vaccinations for other diseases like rubella and diphtheria are continuing, but special campaigns were put on hold because of overwhelmed health systems or governments wanting to avoid crowding at clinics.

The agency says the needed vaccines are available and that it's providing protective equipment.

NEW DELHI — The Indian Air Force on Sunday conducted flypasts and showered flower petals on hospitals across different cities including the capital of New Delhi as part of the Armed Forces’ efforts to thank doctors, nurses and police personnel who have been at the forefront of the country’s battle against the pandemic.

Coronavirus cases in India have neared the 40,000 mark as the country of 1.3 billion enters the 40th day into a nationwide lockdown. The country’s official death toll has exceeded 1,300.

The lockdown was supposed to end Monday, but has been extended another two weeks with a few relaxations. While the spread of the virus has slowed, the lockdown has come at the enormous cost of upending lives and millions of lost jobs.

BEIJING — China residents are flocking to tourist sites, many newly reopened, during a five-day holiday that runs through Tuesday.

Nearly 1.7 million people visited Beijing parks on the first two days of the holiday, and Shanghai’s main tourist spots welcomed more than a million visitors, according to Chinese media reports.

The surge comes after a relaxation of domestic travel restrictions as the coronavirus outbreak slows in mainland China and the government tries to reboot the economy. China reported just three new cases in the last two days.

The number of people travelling and visiting sites remains lower than the average year. Many sites are requiring advance reservations and limiting the number of daily visitors to 30 percent of capacity or less. Popular destinations such as the Forbidden City, the ancient imperial palace in Beijing, are sold out.

One new case was in the inland Shanxi province, west of Beijing, and the other was an imported one in Shanghai. China’s official confirmed case count stands at 82,877. Most of the patients have recovered and been discharged from hospitals.

China reported no new deaths Saturday and has recorded just one in the past two weeks. The country’s official death toll has reached 4,633.

The government has blocked virtually all foreigners from entering the country and sharply curtailed the number of international flights, making it difficult for Chinese citizens to return from overseas too.