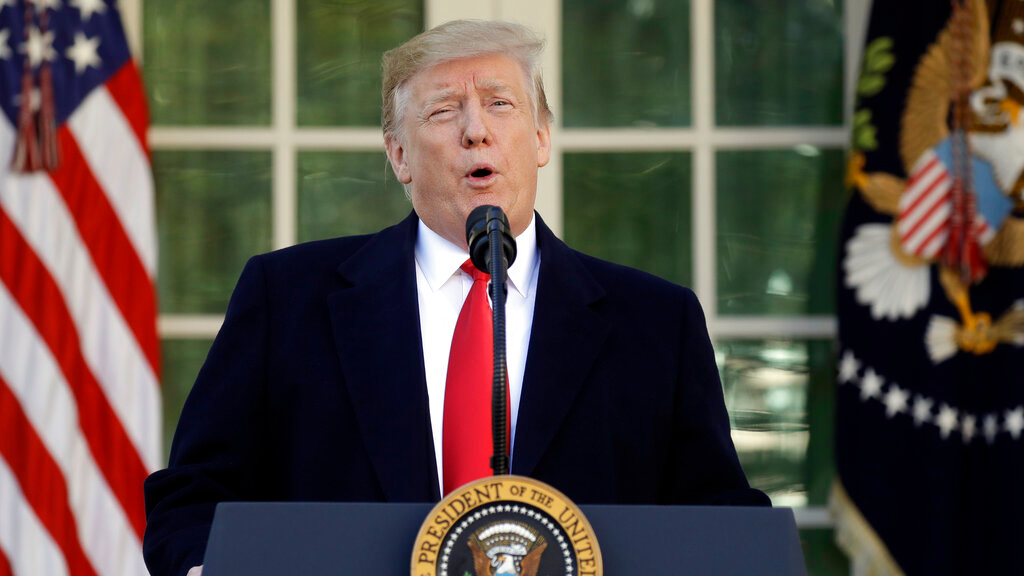 The Latest on the partial government shutdown (all times local):

Trump's action would end what has become a record, 35-day partial shutdown.

Some 800,000 federal workers have had to work without pay or have been kept from doing their jobs as Trump and congressional Democrats were locked in a stalemate over the billions of dollars that Trump has demanded to build a U.S.-Mexico border wall.

Trump spoke at the White House on Friday as intensifying delays at some of the nation's busiest airports and widespread disruptions brought new urgency to efforts to break the impasse.

President Donald Trump and congressional leaders are closing in on a deal to temporarily reopen the government after the longest shutdown in U.S. history.

That's according to five people familiar with the negotiations. They're not authorized to reveal private discussions and are speaking on condition of anonymity.

Trump is due to make an announcement in the Rose Garden shortly.

Three of those five people say the deal would restore money for the shuttered federal agencies for three weeks, while negotiations continue on a longer-term solution.

The deal wouldn't immediately provide a boost in money for Trump's long-sought wall at the U.S.-Mexico border.

The negotiations are continuing, and officials say a deal won't be locked in until Trump makes an announcement. The shutdown in its 35th day.

The FBI director says the partial government shutdown is "mind-boggling, it's short-sighted, and it's unfair."

In a video message to employees posted on the FBI's website, Director Christopher Wray says he's "about as angry as I've been in a long, long time."

He says 100 percent of FBI employees are feeling financial strains from the shutdown.

Most agents in the field are working without pay and other employees are furloughed. He says he knows he can count on FBI agents to help people however they can, but he recognizes they have bills to pay.

Wray says FBI leadership should not be getting involved in political fights. But he says senior FBI officials have been advocating for employees behind the scenes

President Donald Trump is set to speak from the White House on Friday afternoon about the partial government shutdown.

His appearance had been set for 1:30 p.m., but that schedule has been delayed. Trump is still expected to speak soon.

Press secretary Sarah Sanders tweets that Trump will "make remarks" but she's offering no more details about what the president will say.

There's growing speculation that lawmakers and the White House are on the verge of reaching a deal to end the impasse, now in its 35th day.

Fewer than half the furloughed IRS employees recalled during the shutdown to handle tax returns and taxpayers' questions and send out refunds, without pay, reported for work as of Tuesday, according to congressional and government aides.

The official start of the tax filing season comes Monday. The Trump administration has promised that taxpayers owed refunds will be paid on time, and it reversed the policies of earlier presidents and made the money available to pay hundreds of hundreds of billions in refunds on time. The administration planned to eventually send about 46,000 furloughed IRS employees back to work. That's nearly 60 percent of the IRS workforce.

Of the 26,000 employees recalled, about 12,000 have come to work, the IRS officials said. Around 5,000 have claimed the hardship exception under the union contract and another 9,000 couldn't be reached by IRS managers.

The Federal Aviation Administration is reporting delays in air travel because of a "slight increase in sick leave" at two East Coast air traffic control facilities.

The staffing problems were at air traffic centers in Jacksonville, Florida and a Washington D.C. center that controls high-altitude air traffic over seven states.

Martin says safety is being maintained during a period of "minimal impacts" on travel.

White House spokeswoman Sarah Huckabee Sanders says the administration wants to negotiate a government shutdown deal but is not saying how much President Donald Trump wants as a "down payment" on his long-promised U.S.-Mexico border wall.

Sanders spoke to reporters at the White House on Friday, a day after the Senate voted down competing Democratic and Republican plans for ending the partial government shutdown. The shutdown is in its 35th day.

Trump on Thursday suggested he would support a deal with a "down payment" on a wall along the border. Sanders would not detail how much Trump is looking for.

Sanders says the Trump administration has made clear what it wants for border security, adding "we are going to work to get there one way or another."

Democratic House Speaker Nancy Pelosi has called a wall immoral. Other Democrats have said they consider a wall an ineffective, wasteful monument to a Trump campaign promise.

The Senate has voted down competing Democratic and Republican plans for ending the 35-day partial government shutdown on Thursday. But the setbacks prompted a burst of bipartisan talks aimed at temporarily halting the longest-ever closure of federal agencies and the damage it's inflicting around the country.

In the first serious exchange in weeks, Senate Majority Leader Mitch McConnell quickly called Minority Leader Chuck Schumer to his office to explore solving the stalemate. Senators from both sides floated a plan to reopen agencies for three weeks and pay hundreds of thousands of federal workers while bargainers hunt for a deal.

At the White House, President Donald Trump told reporters he'd support "a reasonable agreement." He suggested he'd also want a "prorated down payment" for his long-sought border wall with Mexico.

The Latest: Pelosi rejects 'big down payment' for Trump wall

From travel to IPOs, how shutdown is upsetting US economy