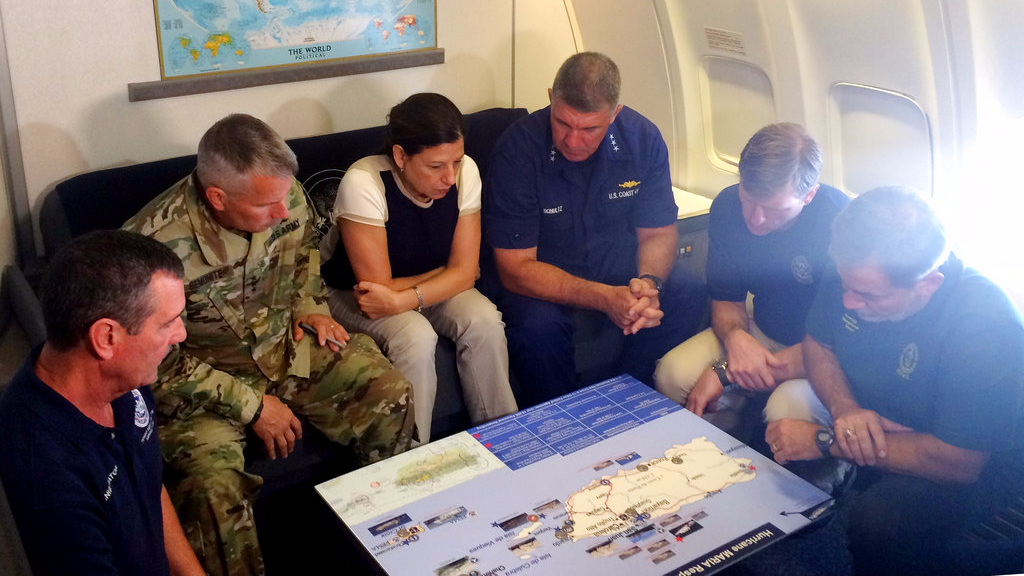 Acting Homeland Secretary Elaine Duke, center, is briefed on the Hurricane Maria response during a flight to Puerto Rico on Friday, Sept. 29, 2017. President Donald Trump on Thursday cleared the way for more supplies to head to Puerto Rico by waiving restrictions on foreign ships delivering cargo to the island.

The Latest on (all times local):

The acting U.S. homeland security secretary is praising the resilience of Puerto Ricans and says daunting work lies ahead to help recover from hurricane devastation.

Elaine Duke made the comments upon landing in San Juan. She drew a sharp rebuke from the city's mayor for saying Thursday that the federal relief effort is "a good news story."

Asked about the reaction to her remark, Duke says: "There is so much more to do. We will never be satisfied. That is why we are here."

But Trump did not repeat what his acting homeland security secretary's said when she called the situation on the ground "a good news story.'

As Elaine Duke landed in Puerto Rico, Friday, Trump described the island as completely devastated. He adds that the rebuilding effort is "starting from scratch." Trump said his administration "will not rest" until people there are safe. Puerto Rico is home to about 3.4 million people.

Trump spoke at the National Association of Manufacturers in Washington.

The acting U.S. homeland security secretary is headed to Puerto Rico to see the devastation and meet local officials.

The trip was planned before Elaine Duke set off a storm herself with her comments on the damage. Duke is traveling with a Coast Guard vice admiral and others.

On Thursday, Duke described the relief effort as "under control" and called the federal response to the disaster a "good news story."

That drew a sharp rebuke from San Juan Mayor Carmen Yulin Cruz, who told CNN, "This is a people-are-dying story."

San Juan's mayor is slamming a Trump administration official for referring to Puerto Rico's suffering as "a good news story."

Acting Homeland Secretary Elaine Duke used the phrase Thursday on the White House driveway, saying the federal response to the aftermath of Hurricane Maria is "a good news story" and adding that "the relief effort is under control." But the mayor of Puerto Rico's largest city heatedly denies that. Carmen Yulin Cruz said on CNN: "This is a people-are-dying story."

Duke was one of several members of the Trump administration Thursday to push back against reporting that the federal government was slow to respond to the storm, which knocked out power and left Puerto Rico's 3.4 million people short of food and water.

President Donald Trump is defending his response to Puerto Rico's hurricane destruction and says "big decisions" are coming on the cost of rebuilding the island.

Trump is quoting praise from Puerto Rico's governor, Ricardo Rossello, who says the president and the Trump administration have "delivered" for the U.S. territory.

Trump writes on Twitter: "The fact is that Puerto Rico has been destroyed by two hurricanes. Big decisions will have to be made as to the cost of its rebuilding!"

His tweets come after people on the island have said help is scarce and disorganized and food supplies are dwindling in some remote towns after Hurricane Maria.

Trump is expected to survey the damage on the island on Tuesday.

Puerto Rico emerges from storm; water and some food scarce