The Latest: UK to end free movement for EU citizens in 2021 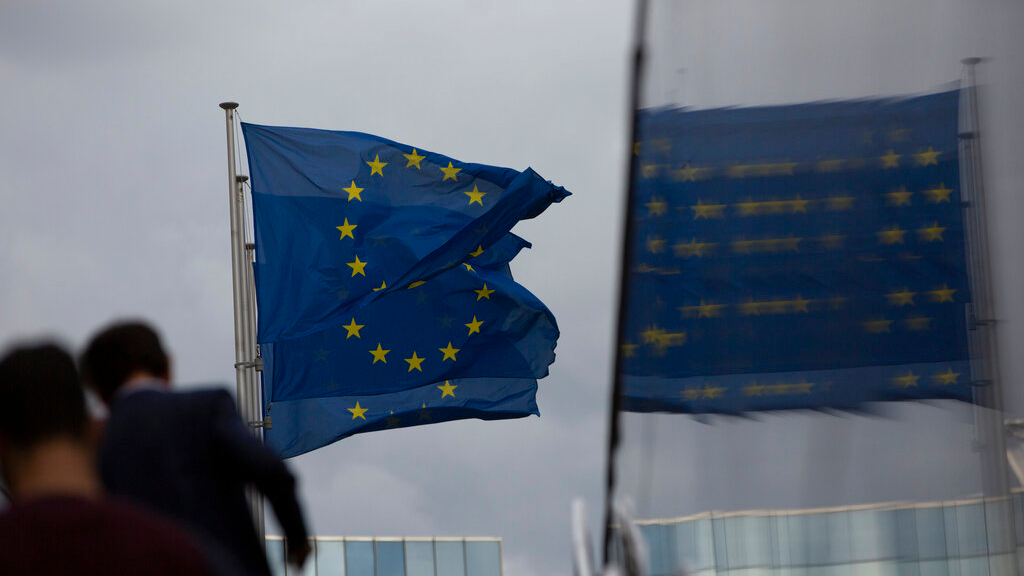 European Union flags flap in the wind as two people walk up a set of stairs outside EU headquarters in Brussels, Sunday, Oct. 13, 2019. Technical talks on Brexit continued in Brussels over the weekend with European Union Brexit negotiator Michel Barnier due to brief EU ambassadors. (AP Photo/Virginia Mayo)

The British government says it will end free movement from the European Union in 2021 as part of post-Brexit immigration reforms.

Plans for an immigration bill have been announced Monday in the Queen's Speech, which outlines the programs of new Prime Minister Boris Johnson's government.

Under the legislation, EU citizens moving to Britain after January 2021 will lose their automatic right to settle in Britain and will be treated in the same way as citizens from non-EU nations.

The government says the new points-based system will select immigrants based on their skills and their potential contribution to the UK.

Under the proposals, all 3.4 million EU citizens living in the UK. now can stay.

The plans depend on Britain leaving the EU with a withdrawal agreement — something that remains uncertain.

Britain's Queen Elizabeth II has arrived at Parliament for the ceremonial state opening ceremony and given her speech.

The queen was driven the mile or so from Buckingham Palace in the horse-drawn Diamond Jubilee State Coach for the ceremony, in which the monarch outlines the government's program for the coming year.

She spoke before the House of Lords to an audience of peers in ermine-trimmed scarlet robes and lawmakers in modern dress.

The queen has performed this duty more than 60 times during her 67-year reign. The speech, written for the monarch by government officials, gives a brisk rundown of more than 20 laws Prime Minister Boris Johnson's administration hopes to pass in the coming months.

But uncertainty around Britain's departure from the European Union due on October 31 and the possibility of an early election makes it uncertain any of these measures will ever become law.

Britain is getting out an ornate royal carriage and a diamond-studded crown for the State Opening of Parliament, a mix of ceremony and politics overshadowed by the looming Brexit deadline.

Queen Elizabeth II is due at Parliament to deliver a speech written by the government outlining its legislative plans.

This year's speech is surrounded by the uncertainty of Britain's delayed exit from the European Union. It is set to include a bill to ratify a withdrawal agreement with the EU — but no such agreement has yet been made.

It also includes sweeping domestic promises on law and order, health care and environmental protection that the government may never get to implement. Prime Minister Boris Johnson's Conservative administration lacks a majority in Parliament, and an election looks likely within the next few months, whether or not Britain leaves the EU as scheduled on October 31.

German authorities say the country's exports to Britain dropped 4.6 percent in the first seven months of 2019 compared with a year earlier, continuing a downward trend since British voters chose to leave the European Union in 2016.

The Federal Statistical Office said Monday that Germany exported goods worth 47.1 billion euros ($52 billion) to the UK between January and July. British exports to Germany were worth 21.3 billion euros — a 3.7 percent decline in year-on-year terms.

In the January-July period, Britain was Germany's No. 7 trading partner overall. In 2015, the year before the Brexit referendum, it was No 5. The statistics office said that German exports to Britain climbed steadily from 2010 to 2015 but then dropped. It said exports of cars and auto parts have declined strongly.

The British government says it will deliver its annual budget on November 6, a week after the country is due to leave the European Union.

Treasury chief Sajid Javid said "the first budget after leaving the EU" will set out "our plan to shape the economy for the future."

It's unclear, however, whether the UK will leave the EU as scheduled on October 31. Talks on a last-minute divorce deal are continuing, and Prime Minister Boris Johnson says the country will quit the bloc at the end of this month, with or without a withdrawal agreement.

But lawmakers in Parliament say the government must ask the EU to delay if a no-deal Brexit is the only other option.

Ireland says that a Brexit deal may be possible in the coming days, after technical teams from Britain and the European Union worked through the weekend.

Coveney insisted it was essential to give the negotiators time to iron out the remaining difficulties which largely center on the border between Ireland and the UK's Northern Ireland.

He added that "there is still a lot of work to do."

EU leaders will meet on Thursday and Friday to see whether a deal is possible ahead of the Brexit deadline of October 31.