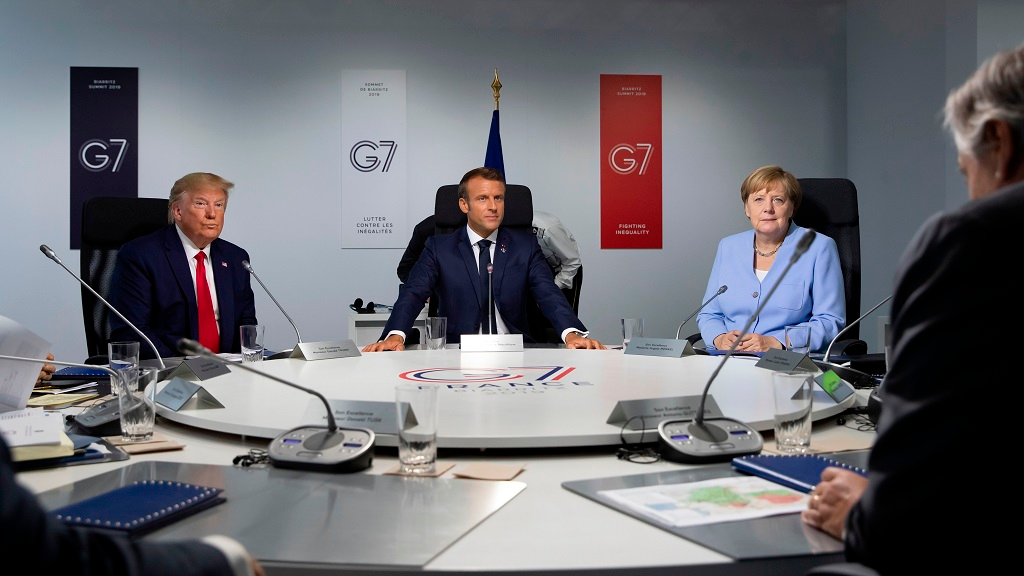 The Latest on the summit of leaders from the Group of Seven democracies (all times local):

UN Secretary-General Antonio Guterres says that the world faces "a dramatic climate emergency." He is urging leaders at a Sept. 23 summit in New York to agree to cut greenhouse gas emissions by more than they promised in the 2015 Paris climate accord.

Guterres said Monday at the Group of Seven summit in Biarritz, France, that "we are much worse than we were during Paris (...) And so it's absolutely essential that countries commit themselves to increase what was promised in Paris."

Guterres said that Greenland's ice cap was melting "dramatically" and that 2015 through 2019 were "the five hottest years on record."

U.S. President Donald Trump has pulled the U.S. out of the Paris accord but Guterres said states, cities and businesses had "the capacity to deliver in relation to climate action."

U.S. President Donald Trump has missed a discussion on climate with other world leaders at the Group of Seven summit in France.

Trump was scheduled to attend Monday's session on climate, biodiversity and oceans, but his chair was empty during a portion of the meeting reporters were allowed to witness.

French President Emmanuel Macron says that while Trump didn't attend, his aides were there.

The president started the morning behind schedule. His meeting with German Chancellor Angela Merkel was delayed about two hours.

He then met with India's Prime Minister Narendra Modi, where he was asked about attending the climate session.

He said it would be his next stop and that he wants clean air and water.

Trump is a climate change skeptic who once had claimed it's a hoax that was invented by the Chinese.

Some called it PorkGate. A disagreement between Britain's prime minister and makers of a distinctive type of pork pies highlighted some of the tensions surround the country as it faces Brexit.

Boris Johnson said on the sidelines of the G-7 summit in France, where he is trying to drum up trade with the U.S., that Britain's failure to sell Melton Mowbray pork pies is an example of unfair U.S. barriers to trade. He said the pies are sold as far as Thailand and Iceland.

But Matthew O'Callaghan, head of the Melton Mowbray Pork Pie Association, told the BBC that Johnson had it wrong and that the pies were not sold in those two countries.

Downing Street fought back saying the association was misinformed and sharing the documents Johnson used for the briefing.

Turns out Johnson was only partly correct. The company that makes them, Samworth Brothers, says they once sold a "very small amount" of the pies in those two countries, but decided in 2015 to focus on the U.K. market.

Macron has threatened to block a European trade deal with Brazil and other South American countries over the Amazon wildfires and what he has described as Brazilian President Jair Bolsonaro's lies over containing deforestation.

The back and forth deteriorated over the weekend when Bolsonaro endorsed a Facebook post insulting Macron's wife, Brigitte. Macron also accused him of missing a scheduled meeting with the French foreign minister in favor of a barber appointment and reiterated that Bolsonaro had lied to him.

Macron said: "It's sad. First for him and for the Brazilians."

He said Brazilian women "are doubtless ashamed to read that about their president" and that he hoped the country would soon have a president who could behave according to the standards of the office.

G-7 countries have agreed to an immediate $20 million fund to help Amazon countries fight wildfires and launch a long-term global initiative to protect the rainforest.

The announcement came from French President Emmanuel Macron, the host of this year's meeting of G-7 leaders, and the Chilean President Sebastián Piñera. Macron said that the Amazon represents the "lungs" of the planet and that leaders were studying the possibility of similar support in Africa, also suffering from fires in its rainforests.

Macron said the U.S. supported the initiative, although he acknowledged that U.S. President Donald Trump had skipped Monday's working session on the environment.

Satellites have recorded more than 41,000 fires in the Amazon region so far this year — with more than half of those coming this month alone. Experts say most of the fires are set by farmers or ranchers clearing existing farmland.

German Chancellor Angela Merkel is hailing what she describes as a "big step forward" on Iran at the Group of Seven summit.

G-7 leaders held what Merkel describes as a constructive discussion on Iran Saturday night, which was followed by a surprise visit Sunday by Iran's foreign minister for discussions with the French hosts.

Merkel said Monday: "It is a big step forward that we not only don't want Iran to have nuclear weapons, but we also (want to) achieve the solution by political means."

Merkel was pressed on what progress she saw exactly and on whether U.S. President Donald Trump was prepared to accommodate any move toward alleviating sanctions against Iran. She replied: "I can't say that at the moment. There is an atmosphere here in which talks are welcomed, in which talks between the Europeans and Iran and particularly France and Iran are welcomed — this is happening in coordination with the United States of America, and that is already a lot."

British Prime Minister Boris Johnson talked trade with his Australian counterpart at the Group of Seven summit in France as he sought to position his nation for a post-Brexit world.

Johnson's office says he and Prime Minister Scott Morrison "discussed their enthusiasm for an enhanced and deep trading relationship once the U.K. leaves the EU."

The two leaders also discussed concerns about Hong Kong "and agreed that it was paramount for all sides to remain calm and peaceful."

Johnson says it was "fantastic" to talk to Morrison, who "seemed in very high spirits" despite England's victory Sunday in the third test of the Ashes cricket series.

French officials say the U.S. and France are nearing a possible deal on taxing online powerhouses — and avoiding new tariffs on French wine.

Two officials said Monday that progress was made at a dinner Sunday night with U.S. Treasury Secretary Steven Mnuchin, France's finance minister and other U.S. officials on the sidelines of the Group of Seven summit in Biarritz, France.

France introduced a 3% tax last month on French revenues of big tech companies like Google and Amazon, which currently pay next to no taxes on French sales.

U.S. President Donald Trump threatened retaliatory measures on French wine, which could be announced as soon as Monday.

Asked about the wine tariffs Monday, Trump said "it depends on the deal we work out on the digital tax," which "We're negotiating right now."

The French officials said France would scrap its tech tax if an international tax deal on digital multinationals is in place by 2020 or 2021 — and could reimburse the companies if the international tax is lower than the French tax.

The officials spoke only on condition of anonymity because they could not be named publicly.

G-7 leaders are wrapping up a summit dominated by tensions over U.S. trade policies and a surprise visit by Iran's top diplomat.

But first the leaders of the Group of Seven rich democracies — the U.S., France, Britain, Germany, Japan, Canada and Italy — are holding a string of meetings on climate change, how digitalization is transforming the world and other issues.

The troubled world economy is overshadowing the meetings in the French Atlantic resort of Biarritz.

Macron also took a big gamble by inviting the Iranian foreign minister to Biarritz, hoping to secure a breakthrough in global tensions over Iran's nuclear program.