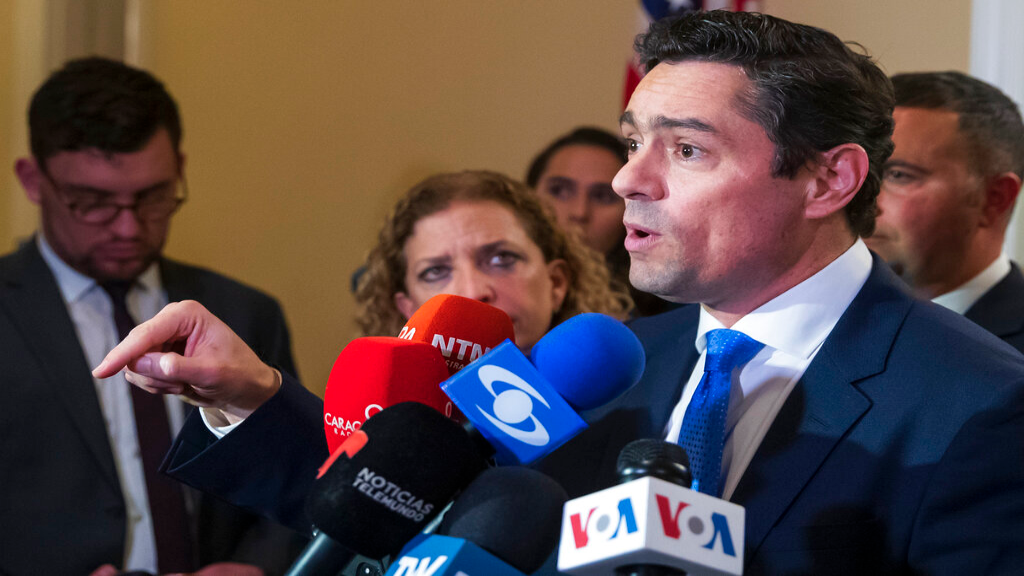 Venezuelan opposition's new envoy in Washington Carlos Vecchio speaks after a meeting with members of the U.S. House of Representatives on Capitol Hill, Tuesday, Jan. 29, 2019, in Washington. (AP Photo/Alex Brandon)

Venezuelans are exiting their homes and workplaces in a walkout organised by the opposition to demand that President Nicolas Maduro leave power.

People began gathering on streets in the capital city of Caracas around noon, waving flags and chanting phrases like, "Free elections!"

Drivers are honking their horns in support of the protesters.

The demonstration comes one week after opposition leader Juan Guaido declared himself president before thousands of supporters, contending that he is the nation's rightful leader because Maduro's reelection was a sham.

Guaido is the 35-year-old president of the National Assembly, the only branch of Venezuela's government controlled by the opposition.

Maduro is refusing to step down and accusing the U.S. of orchestrating a coup by backing Guaido and imposing punishing oil sanctions.

The White House says President Donald Trump has stressed to Venezuelan opposition leader Juan Guaido his "strong support" for the nation's fight to regain its democracy.

Trump and Guaido spoke on Wednesday. The White House says Guaido thanked Trump for committing the U.S. to freedom and prosperity in Venezuela and the region. The leaders also agreed to regular communication in support of Venezuela's path back to stability and to rebuild strained relations between both countries.

Large protests are planned across Venezuela on Wednesday to increase pressure on President Nicolas Maduro to step down.

Guaido declared himself Venezuela's rightful leader last week and said the nation "is set on change."

Embattled Venezuelan President Nicolas Maduro has turned to the power of prayer as opposition leaders backed by the United States amp up pressure for his ouster.

Maduro on Wednesday participated in a Christian prayer session with dozens of evangelical supporters.

In the session aired on state TV, Maduro lowered his eyes and raised his right hand in prayer.

He asked "all powerful God" to bless Venezuela and lead it to a peaceful future.

A minister leading the service says millions of evangelicals are praying around the clock for the South American nation.

The socialist president has been challenged by opposition leader Juan Guaido, who claims that he's Venezuela's rightful leader.

Venezuela's President Nicolas Maduro is huddling with his military ahead of planned anti-government protests.

In scenes broadcast on state TV, Maduro could be seen walking around the Fort Tiuna military base in Caracas early Wednesday with top commanders and dozens of troops.

chief?" Maduro asked the troops, who responded with loud shouts of "Yes, commander in chief!"

Since opposition leader Juan Guaido declared himself interim president last week with the support of the U.S. and other nations, Maduro has appeared almost daily on state TV with his military, projecting an image of invincibility even as international pressure against him builds.

Supporters of Guaido are planning a nationwide walkout Wednesday to ratchet up pressure on Maduro.

Venezuelan President Nicolas Maduro is pressing his case directly to the American people, asking for their help preventing a "Vietnam in Latin America."

In a 45-second video shot late Tuesday from the presidential palace and addressed to "the American people" Maduro said that the Trump administration is behind an attempt to overthrow him in a coup.

He said the U.S. is looking to get its hands on Venezuela's abundant oil reserves, replicating U.S. military interventions in Iraq and Libya.

But he said he's confident that he's on the "right side of history" and pleaded with regular Americans to keep U.S. troops out of the country.

The wife of a rebel military officer who President Nicolas Maduro has accused of plotting his overthrow says he has been arrested after sneaking back into Venezuela amid the country's upheaval.

Sorbay Pailla said she last heard from her husband, retired National Guard Col. Oswaldo Garcia Palomo, on Sunday after he entered the country clandestinely from Colombia. She said contacts within the DGCIM military intelligence unit told her that he was arrested in the western state of Barinas.

The Associated Press was unable to confirm the arrest and the government has yet to comment. But Luis Almagro, the head of the Organization of American States, condemned late Tuesday what he called the "kidnapping" of Garcia Palomo.

Garcia Palomo has been an outspoken critic of Maduro who has been open for months about his intent to amass a military force in exile to remove Maduro.

This version corrects the spelling of the officer's name to Garcia Palomo.

Trump tweeted Wednesday there's a "Massive protest expected today." He says, "Americans should not travel to Venezuela until further notice."

Venezuelan opposition leader Juan Guaido is looking to increase pressure on President Nicolas Maduro with nationwide walkouts. Guaido declared himself Venezuela's rightful leader a week ago and says the nation "is set on change."

The U.S. and many other nations back Guaido. Trump has imposed sanctions that could starve Venezuela of billions of dollars in oil revenue.

Trump tweets: "Maduro willing to negotiate with opposition in Venezuela following U.S. sanctions and the cutting off of oil revenues. Guaido is being targeted by Venezuelan Supreme Court."

Venezuelan President Nicolas Maduro says he is willing to negotiate with the country's opposition.

Maduro's remarks in an interview with Russian state-owned RIA Novosti news agency on Wednesday came amid a dire political crisis in Venezuela. Opposition leader Juan Guaido declared himself the interim president last week and has urged citizens to challenge Maduro with walkouts on Wednesday.

Maduro told RIA Novosti that he is "willing to sit down for talks with the opposition for the sake of Venezuela's peace and its future." Maduro said the talks could be held with mediation of other countries.

Russia is one of the staunchest supporters of Maduro and has offered to mediate.

Venezuelan opposition leader Juan Guaido is looking to ratchet up pressure on President Nicolas Maduro with nationwide walkouts Wednesday, just a day after the embattled socialist administration barred Guaido from leaving the country while he is investigated.

The man challenging Maduro's claim to the presidency is urging Venezuelans to step outside their homes and workplaces for two hours beginning at noon in the first mass mobilisation since he declared himself the nation's rightful leader a week ago during another round of big protests.

The surge in political maneuvering has seen two dozen nations, including the United States and several big Latin American countries, backed Guaido, and the Trump administration has imposed sanctions that could starve the already distressed nation of billions in oil revenue.

But Maduro is holding firm.