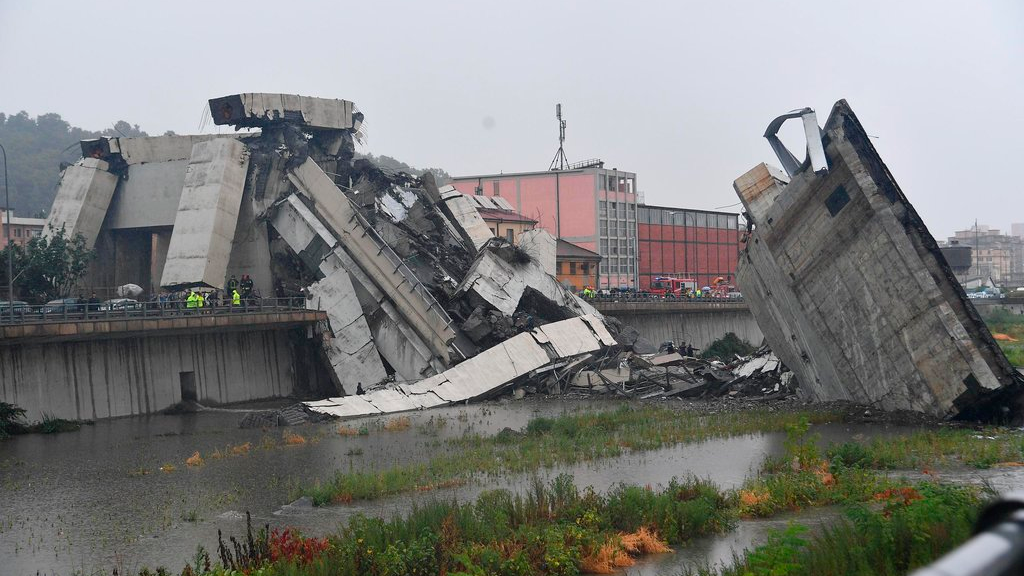 Rescuers work among the rubble of the collapsed Morandi highway bridge in Genoa, northern Italy, Tuesday, Aug. 14, 2018. A large section of the bridge collapsed over an industrial area in the Italian city of Genova during a sudden and violent storm, leaving vehicles crushed in rubble below. (Luca Zennaro/ANSA via AP)

The Latest the collapse of a bridge in Italy (all times local):

It's too early to say what caused the deadly collapse of a highway bridge in the Italian city of Genoa, but corrosion or weather conditions could have been part of the cause, a structural engineer specializing in bridges says.

"As this reinforced and prestressed concrete bridge has been there for 50 years it is possible that corrosion of tendons or reinforcement may be a contributory factor," said Ian Firth, former president of The Institution of Structural Engineers.

Firth said the bridge is an unusual design but is similar to a larger bridge in Venezuela, and both were designed by Riccardo Morandi.

The head of Italy's civil protection agency Angelo Borrelli has put the number of victims of the Genoa bridge collapse at 20 people dead and 13 injured.

Borrelli told a press conference in Rome on Tuesday that the victims appear to all have been in vehicles that plunged from the bridge. Borrelli said that while there are two warehouses below the collapse it is believed they were closed for the summer holiday and that no one was inside. He said no residences were involved.

Borelli said that highway engineers were checking the safety of the bridge in other points, and that some areas were being evacuated as a precaution.

Rixi told Sky TG24 that, as he was speaking, emergency response crews were recovering a body from an automobile that was suspended on a central part of the bridge.

Rixi said it is "the biggest tragedy involving a bridge of this importance in Europe in the last decades."

He said that at least 20 vehicles on the bridge had plunged in the collapse, and that also people in buildings below the bridge were in some way involved. That included the trash management offices for the city of Genoa.

French President Emmanuel Macron has offered Italy his country's help after a bridge collapsed in the Italian city of Genoa.

The president's office said that Macron, who is currently staying at a presidential residence in southern France, had a phone call with Italian Prime Minister Giuseppe Conte.

In French and Italian, Macron wrote on Twitter: "Our thoughts go to the victims, their relatives and all the Italian people. France stands by Italy in that tragedy and is ready to provide all necessary support."

The disaster occurred on a major highway that connects Italy to France and other vacation resorts.

The Italian news agency ANSA citing the Interior Ministry says that 11 people are confirmed dead in the collapse of a highway bridge in the port city of Genoa.

ANSA reported Tuesday that five people are injured and in serious condition. The Interior Ministry press office could not immediately confirm the fatalities.

An official with Italian firefighters, Amalia Tedeschi, told RAI state TV that some 20 vehicles, including cars and trucks, had been involved in the collapse. She confirmed that two people had been extracted alive from vehicles, with injuries.

Tedeschi said that sniffer dogs are at work in the rubble looking for more injured and victims. In addition, heavy equipment was being moved in so they could lift pieces of the bridge.

Tedeschi said the part of the bridge that collapsed was about 80 meters (yards) in length. Media reports had earlier put it at 200 meters.

Italian news agency ANSA says one person has been extracted alive from the rubble of the bridge collapse near the northern city of Genoa and is being transported by helicopter to a hospital.

There was no immediate word on overall deaths or injuries. Maria Luisa Catalano of the highway police in Genoa said work was ongoing, adding, "we don't know numbers of victims/injured yet."

Interior Minister Matteo Salvini said some 200 fire fighters are responding to the accident. On Twitter he says "we are following minute by minute the situation of the bridge collapse in Genoa."

The bridge is an important interchange between the northern regions of Lombardy and Piedmont and the beaches of Liguria, and to the main highway heading westward into France.

Italian authorities say that about 10 vehicles were involved when a raised highway collapsed during a sudden and violent storm in the northern port city of Genoa.

Private broadcaster Sky TG24 said that a 200-meter section of the Morandi Bridge collapsed Tuesday over an industrial zone, and firefighters told The Associated Press that there are concerns about gas lines.

Police on Twitter said the collapse occurred during a sudden, violent storm, while firefighters said vehicles were involved, indicating the likelihood of fatalities.

Photos published by the ANSA news agency on its website showed a huge gulf between two sections of the highway.

The Italian news agency ANSA says a raised highway has partially collapsed in the northern port city of Genoa.

There was no immediate word on deaths or injuries. ANSA said that authorities suspected that a structural weakness caused the collapse on Tuesday.

Images circulating on Italian media show the highway through the city with a large section missing. Emergency vehicles were responding.

CAL to resume flights from Jamaica

Couple helps save environment by upcycling tires into pet beds