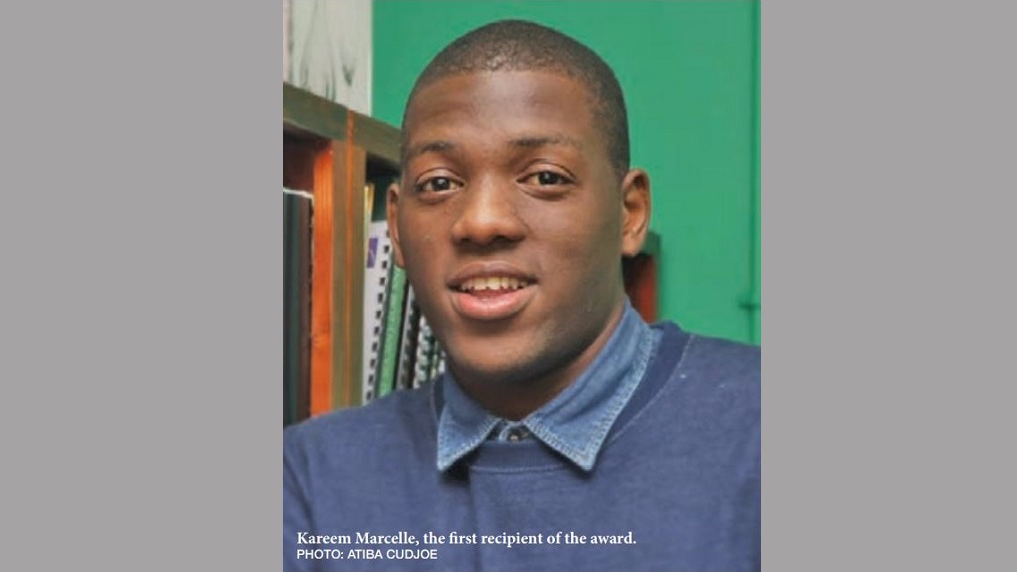 In an area stigmatised by violence, one young law student is showing that there is still much potential for good in Beetham Gardens.

First-time winner of the 2017 Makandal Daaga Scholarship at the University of the West Indies (UWI), Kareem Marcelle, is determined to show that the small percentage of lawbreakers within Beetham cannot stop others in the area from succeeding.

Speaking to LoopTT, Marcelle, who is pursuing his LLB at UWI, said there are so many people in his community who are striving to be better, and he is determined to help them.

Marcelle was chosen from among hundreds of other candidates based on his active participation and creation of community outreach programmes, events and other community initiatives.

“It’s meant to give someone the opportunity who would not normally be able to, who would be able to go into troubled communities and improve their lives,” he said.

Marcelle also came from a troubled home after his father moved abroad while he was still a child.

“I had a rocky start not just in terms of growing up in poverty…my father picked up and went to the United States, which we found quite strange…it was really because of a prior relationship that he had,” Marcelle said.

Marcelle, who was about to do his SEA exams, struggled as the family was thrown into upheaval.

“It was really tough, especially on the verge of a new school year, my two older brothers were forced to come out of school and find jobs to help sustain our already growing bills and help my mom in her state of emotional distress,” he said.

Marcelle said the family did all they could, even selling pies and other items to help raise money to send him to school.

He said they later received news that his father had been convicted of murder in the US, and was sentenced to 35 years to life imprisonment.

Marcelle said the trauma was daunting, but he became determined to overcome it.

“In the midst of trying to heal, I got that news. While I believe in justice, the human part of me felt the emotions attached to that. I remember crying in the exam, and the invigilator asking me what was the matter.”

Marcelle said he was only too aware that his life could have taken a completely different direction.

“I fell down badly in my studies, I still got my passes but throughout the entire thing I chose to be a better example for my younger peers.”

“I could have easily gone on the streets and looked for the nearest gang leader to be my role model. I could have looked for so many other avenues. The likelihood of a young person looking for a local patriarch when the biggest drug lord comes by in the absence of a proper father figure, this is what could happen to so many youths.”

“My life’s mission is not just to be a role model but to learn from my father’s mistakes. I never knew what it was like to have more than one school shirt, so I started a back to school drive.”

“When I had no gifts for Christmas, I didn’t want to hurt my mom because I didn’t want her to feel hurt, so one of the things I do every year on Christmas Day we have a gift-giving, so every child comes out and they have a gift and a toy,” he said.

Marcelle, who is still the PRO for the Beetham Gardens Village Council, is also the PRO for the Positive Impact Organization, another community group providing mentorship and counselling services for schools in the area without guidance counsellors.

Marcelle is also a part of BEYOND, (Beetham Estate Youth Outreach Network Development), which helps students to complete their SBAs.

Moving beyond Beetham’s shadow of violence

Marcelle said it is important to him that the nation recognises that the majority of people within his community want the same things as everyone else: safety and security, improvement for their families, and unity.

Referring to incidents which occurred in October this year, Marcelle said those criminal elements do not represent the rest of the community.

“I would love for the media to get a different view, for instance the recent issues we had with the police, I came out and everyone I saw, I told them that they were wrong. But that is not even one percent of the community that was behaving like that. There are a lot of persons who would have condemned it.”

Marcelle said there is a different way to deal with issues, which he plans to continue moving forward.

“For example when we complained against pollution in our drains by Angostura, I formed a committee, I got some attorneys on board and we went in to them and we threatened legal action. We used a different type of approach rather than blocking the roads and pelting vehicles,” he said.

“It is a work in progress, but I think we are generally improving and I want us to continue pushing and sharing that positivity,” he said.

Pursuing the law to help his community

Marcelle said that he intends to complete his law degree and start working toward helping to defend the rights of those within his community.

Even with his present challenges, he is committed to furthering his dreams.

“I choose to be in a career so that I can help that community, not just because I want to be a politician or make a lot of money. It’s so I can help to be an agent of justice. When there are so many socio-economic issues, in this community and the country, I need the resources to be able to help them.”

“When you ask children in the area what they want to be, they say they want to be a police officer or a soldier, while these are admirable jobs, what about the other jobs?"

Marcelle said he will continue to pursue his dreams and to persevere no matter what.

The scholarship is named in honour of Makandal Daaga, liberator and social activist of Trinidad and Tobago, who spearheaded the ‘Black Power Movement’.

Daaga’s work focused on the central tenets of law, that is, equality, social justice and fairness. His advocacy and that of the several organisations he instituted, made significant impacts on areas that are of particular relevance to law and legal policy.

Accordingly, the scholarship is aimed at creating lawyers who will be meaningful change agents working towards promoting justice and an egalitarian society.