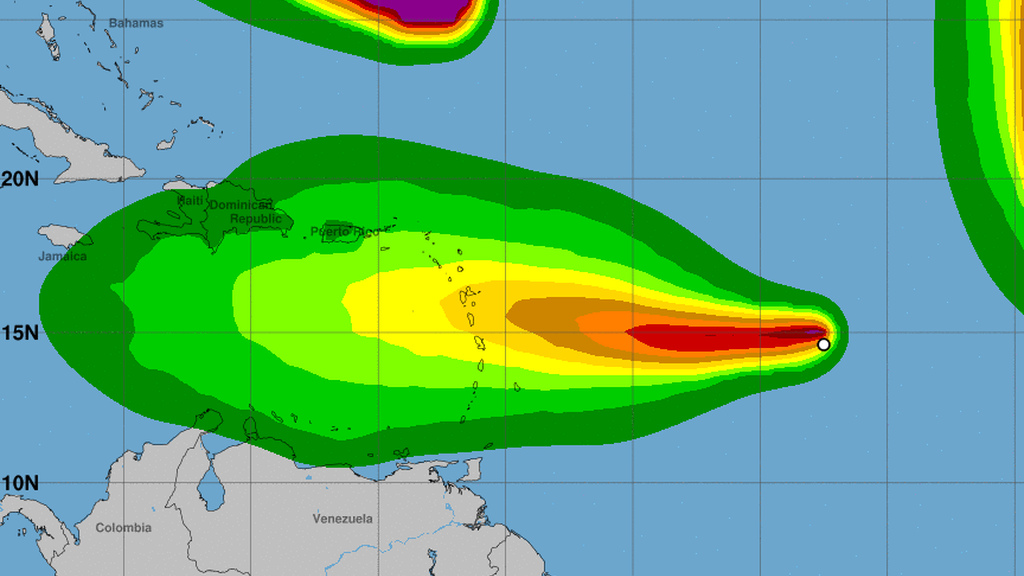 Caribbean islands still reeling from the effects of Hurricane Irma and Maria are now bracing for Hurricane Isaac.

The Hurricane weakened to a tropical storm on Monday night but is projected to once again reach Category 1 hurricane strength in the next day or two.

The storm is on track to hit the Lesser Antilles islands of Dominica, Martinique, and Guadeloupe and affect St Martin/Sint Maarten, St Barths, Saba and St Eustatius.

At a news conference on Monday, officials in Dominica put the nation on notice, asking citizens to remain vigilant.

Joseph Isaac, Minister of the Environment, Climate Resilience, Disaster Management and Urban Renewal, urged people in vulnerable areas and structures to seek shelter and walk with such as water and dry foods to reduce the burden on the system.

He insisted that weather monitoring and reporting must be done by trained professionals.

Acting Prime Minister Reginald Austrie said a decision will be made on Wednesday on the closure of schools and businesses and once that decision is made, all citizens are expected to remain indoors.

He said while the full complement of shelters have not opened since Hurricane Maria last year, emergency shelters will be opened by Wednesday. He said in areas where there are not enough shelters, private homes will be used. He also offered his house, which he said was used during Hurricane Maria.

He called on the private sector to secure all their properties.

Hurricane Isaac, on its current track, is expected to be at its closest point to Sint Maarten/St Martin on Friday morning about 175 miles away.

The Emergency Operations Center (EOC) was activated on Monday by St Martin’s Prime Minister Leona Romeo Marlin and a decision to close schools will be made during an EOC meeting on Wednesday based on the Wednesday forecast track of Hurricane Isaac.

The Government warns that shelters should be used as a last resort and individuals should first seek shelter with family or friends if they need to do so.

Kamla: We must jealously guard tenets of democracy