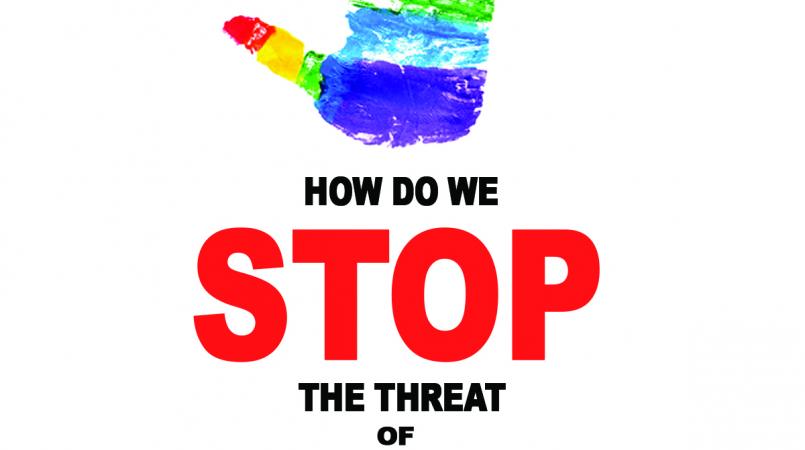 Responding to reported murders of three gay men—all Caribbean migrants—in a monthlong period earlier this year, and rumours swirling about other incidents of violence, the groups met together and swiftly developed a safety awareness campaign. They piloted the messages in toilets at LGBTQI parties over the Carnival weekend.

Today, in response to new concerns circulating on social media about the safety of gay men, they formally launched the first wave of a larger campaign, funded by an award to CAISO: Sex & Gender Justice from the Canadian High Commission

Watch • Send • Stop offer simple messages: Be aware. Watch out for each other. Help find solutions.

“It’s an empowerment message,” said Colin Robinson, director of CAISO. “Our LGBTQI communities here are resilient and have a long history of collaboration and of solution-seeking. Instead of panic, fear and victimhood, we are calling for people to increase our responsibility and vigilance, to take more loving care of each other, and to ensure each other’s protection.”

The groups, which include Womantra, Friends for Life, the Silver Lining Foundation, I Am One and the Women’s Caucus of T&T, have also reached out to police leadership to offer partnership and pressure in investigating the three murders, to find ways to encourage LGBTQI people who refuse to report crimes because of negative experiences with police, and to ensure  accurate information about the number and nature of violent crimes against LGBTQI communities is disseminated.

The flyers include an email address justicediversitytt@gmail.com where the groups encourage crime victims to contact them for support and advocacy. They can also reach a Friends for Life social worker at 681-4150.

“We are also asking the media to help," said Terry Ann Roy of I Am One, "through responsible, non-sensational reporting, and by ramping up investigative journalism, so we get to the bottom of why people are being killed.”

Supported by a TT$1.3m award from the European Union, the Alliance for Justice and Diversity, Say Something and the University of the West Indies are also about to embark on a three-year project that includes family groups, strengthening policing, school safety, and legislative change.