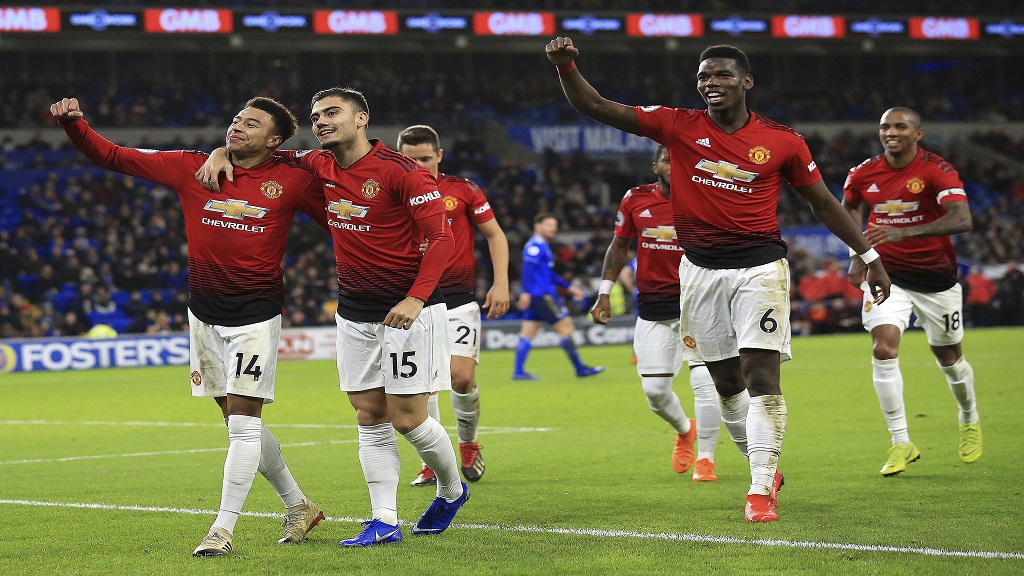 Three goals in the first half from Marcus Rashford, Ander Herrera and Anthony Martial and a brace from Jesse Lingard earned all three points at Cardiff City Stadium, with Victor Camaras' penalty proving little consolation.

United stay sixth in the table, but the manner of the performance, as well as the result - the first time the side have scored five times in the league since Alex Ferguson's final game - will have been a welcome sight for the travelling fans at the end of a week that saw Jose Mourinho's contentious time in charge come to an end.

The new United era got off to a stunning start when Rashford blasted home a free-kick from 30 yards out that left goalkeeper Neil Etheridge rooted to the spot.

Almost 81 per cent of possession underlined United's early control, and the scoreline reflected their dominance when Herrera's strike looped off Greg Cunningham's shoulder and into the net 29 minutes in.

Cardiff were gifted a lifeline when Camarasa fired high into the net from the spot, but United's two-goal lead was restored three minutes later, when Martial slotted beneath Etheridge after a sublime one-touch passing move involving Lingard and Paul Pogba, restored to the starting line-up.

And any hope of a Cardiff comeback was promptly extinguished 11 minutes into the second half, when Lingard dispatched a confident penalty after he had been bundled to the ground by Sol Bamba.

Pogba and Phil Jones were each denied by good Etheridge saves, while David de Gea kept out a good Kenneth Zohore attempt.

It was 5-1 when Lingard rounded the keeper and slotted home from Pogba's pass in the 90th minute to secure a first away league win since November 3 in style and give Solskjaer extra cause for celebration against the club he used the manage.

What does it mean? Solskjaer has lifted the gloom

'You make me happy, when skies are grey' goes the song sung in Solskjaer's honour by United fans, and that certainly seems to be the case at the end of a week that started with Mourinho apparently looking likely to stay in the job.

United looked liberated in south Wales, playing expressive, attacking football and scoring the goals to go with it, while much-maligned players like Victor Lindelof seemed to exude confidence.

Yes, Cardiff were undeniably poor and, yes, United are still sixth, but this was a match where the manner of the performance was arguably more important for the visitors than the result itself.

Lingard given a licence to thrill

Lingard epitomised the freedom with which United's attacking players performed. His assist for Martial's goal and his well-taken penalty were the high points of a display full of verve, and Cardiff never quite got to grips with him.

Bamba was dispossessed too easily by Pogba in the build-up to Herrera's goal, his clumsy foul allowed Lingard to make it 4-1 and he missed a good chance for a goal. It was not his finest outing.

Huddersfield Town visit Old Trafford for the first home game of the Solskjaer era, while Cardiff head to Crystal Palace, both on December 26.

Liverpool top of EPL for Christmas after beating Wolves 2-0