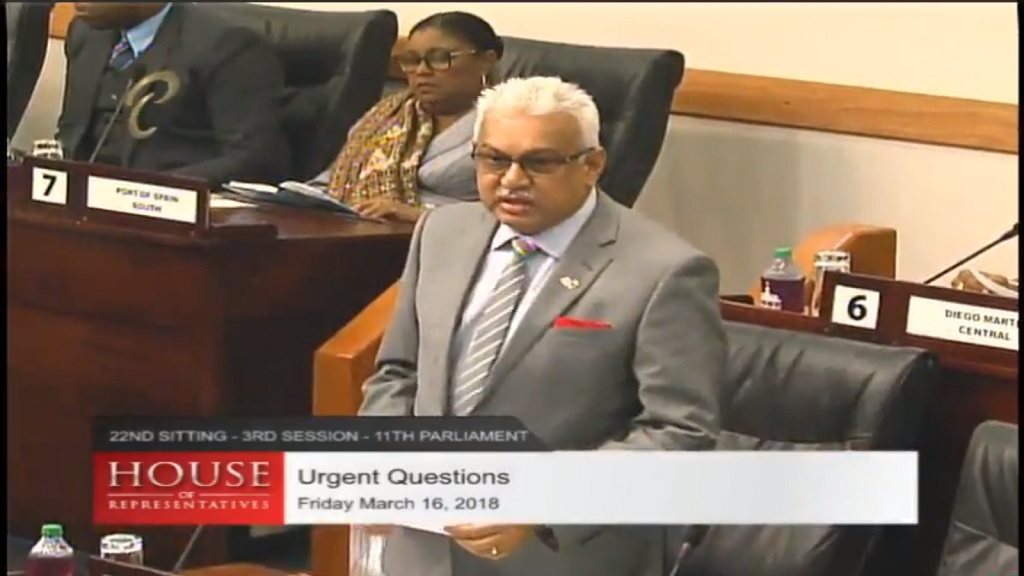 Five-year-old Haleema Mohammed, who suffers with beta thalassemia, has been hospitalised with a medical emergency and may need additional treatment.

However, Health Minister Terrence Deyalsingh said that a new application should be filed to the Children's Life Fund Authority (CLF) to apply for funding for this new condition.

Five-year-old Haleema was hospitalised at the Eric Williams Medical Sciences Centre earlier this week after a medical emergency following her treatment for her condition in India.

Speaking in Parliament in response to an urgent question, Deyalsingh said that according to the Children's Life Fund Board which was set up under the previous UNC administration, beta thalassemia was not listed as a life-threatening illness.

As a result, Haleema's family would need to take her to the nearest health institution and a new application would have to be filed.

“The individual is suffering from thalassemia which is not a life-threatening disease as stated by the Children’s Life Fund Board…the same board that was operating under the previous administration," he said.

“The individual in question and her family went to India for a particular procedure and returned. I would advise Mrs Mohammed and her family to take her to the nearest healthcare institution for emergency treatment.”

“In light of the new clinical symptoms, an application can be made to the Children’s Life Fund for any treatment which qualifies as life-threatening.”

Deyalsingh said so far no new application has been received for the little girl, adding that the Authority has so far disbursed over $28 million to children with life-threatening illnesses since September 2015.

“No application to date for this new episode has been received and the Children’s Life Fund continues to function."

However, San Juan/Barataria MP Dr Fuad Khan countered, asking if Haleema’s condition was not life-threatening, why she was now fighting for her life at the Eric Williams Medical Sciences Centre.

Deyalsingh said however that he is not certain what happened in India and assumptions should not be made.

“We have no idea what happened in India so it is very improper for anyone to indicate or infer that this was related to the original condition. The patient went to India. Neither you nor I nor anyone knows what happened or did not happen in India and we should not take assumptions as facts," he said.

In September 2017, Haleema and her family travelled to India for life-saving surgery after her application was rejected by the Children's Life Fund Authority.

The board of the Authority rejected the application as the disorder was not considered a life-threatening illness as required by Section 19(e) of the Act.

What is beta thalassemia?

According to the US National Library of Medicine, beta thalassemia is a blood disorder that reduces the production of hemoglobin, the iron-containing protein in red blood cells that carries oxygen to cells throughout the body.

In people with beta thalassemia, low levels of hemoglobin lead to a lack of oxygen in many parts of the body. Affected individuals also have a shortage of red blood cells (anemia), which can cause pale skin, weakness, fatigue, and more serious complications.

People with beta thalassemia are at an increased risk of developing abnormal blood clots.

The signs and symptoms of thalassemia major appear within the first 2 years of life. Children develop life-threatening anemia.

They do not gain weight and grow at the expected rate (failure to thrive) and may develop yellowing of the skin and whites of the eyes (jaundice).

Affected individuals may have an enlarged spleen, liver, and heart, and their bones may be misshapen. Some adolescents with thalassemia major experience delayed puberty. Many people with thalassemia major have such severe symptoms that they need frequent blood transfusions to replenish their red blood cell supply.

Over time, an influx of iron-containing hemoglobin from chronic blood transfusions can lead to a buildup of iron in the body, resulting in liver, heart, and hormone problems.

Inshan Ishmael: "True heroes" in Haleema's case not given credit