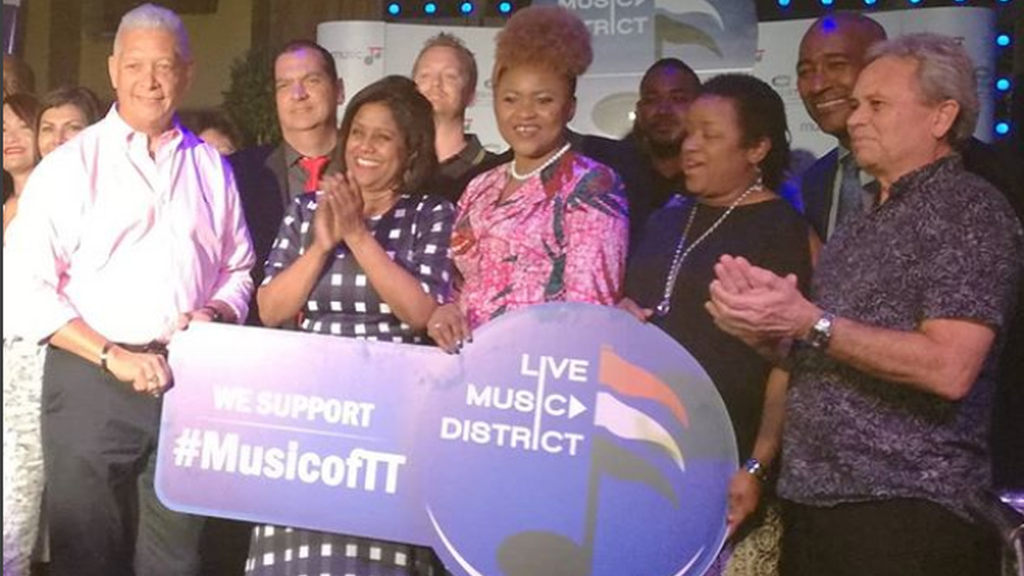 From L, PoS Mayor Joel Martinez, Trade Minister Paula Gopee-Scoon, Culture Minister Nyan Gadsby-Dolly, Allyson West, Minister in the Ministry of Finance and Finance Minister Colm Imbert were among the guests at the launch of the Live Music District.

About seven hundred performances are expected to be featured over the next 12 weeks when Trinidad and Tobago’s first Live Music District (LMD) goes into effect from next week.

The pilot project was officially launched at Residence nightclub at One Woodbrook Place on Thursday night.

The Live Music District is one of the initiatives recommended by Sound Diplomacy, the UK consultants hired by Music TT in 2017 to hold consultations with music stakeholders and was among the plans announced in the 2018 budget.

Jeanelle Frontin, General Manager of Music TT, told Loop that 30 venues in the Port-of-Spain district will be participating with each committed to featuring 24 artists over six weeks.

She said the venues will be responsible for structuring the performances.

MusicTT will pay the artists for the first 20 minutes of their performances and anything over that will be negotiated between the artists and venues.

There will be official tip jars at the venues to supplement the artists’ income.

Frontin said the venues and artists are encouraged to be creative and do things to promote entrepreneurship by having ticketed events for special occasions or on special days to promote themselves and the venue.

Asked about funding to cover artists’ payments, she said Angostura is on board as a sponsor and they are in talks with other sponsors.

“We are concluding discussions with other sponsors as well so that this pilot phase can prove all that we need it to, that the input of live music in venues and the promotion of music tourism as a city can and will generate increased revenue to all parties involved,” she said, noting that in Phase Two, they will look at sustainability models.

In his address, John Arnold, Chairman of MusicTT said Phase Two will seek to fully expand the Live Music District to more venues from July to December 2018, creating up to 3000 new performance opportunities throughout the LMD.

He revealed that a Live Music District fully automated online platform was sponsored in part by Australian company Muzeek.

This platform will allow all venues and artists to conduct business online as they will be hosted on the site. Booking requests can be sent via the platform and artists bio, photos and video links will be available on the site.

Performance contracts can also be accessed via the platform.

Armold said performing acts can add an unlimited number of users to their account, including managers, band members and even accountants. They can also add the platform’s “Book” button to their websites and even to their Facebook pages for anyone to request to book them.

He said before the end of April, the public will have the ability to download the LMD app over iOS and Android in order to see the schedule of the District, access wayfinding to venues, and even access deals at the venues on drink specials, among other things.

He said at the end of Phase One, the findings will be assessed in the month of June and improvements made in time to launch Phase Two in July 2018.

“By Phase 2, the sustainability models will be built in, inclusive of a collaboration with FashionTT to create a line of LMD designs and other forms of merchandise, the proceeds of which will continue to develop the LMD and subsidise the base fees,” he said.

“Varied parts of the value chain of the music sector, such as the recording side of the industry, will now be able to benefit as the LMD signs on Studios in the City of Port-of-Spain. LMD artists can choose to access greatly subsidised studio time instead of fees, with in-kind payments giving opportunities to artists who may not have been able to afford the same,” he added.

The venues that will be participating in the Live Music District are: