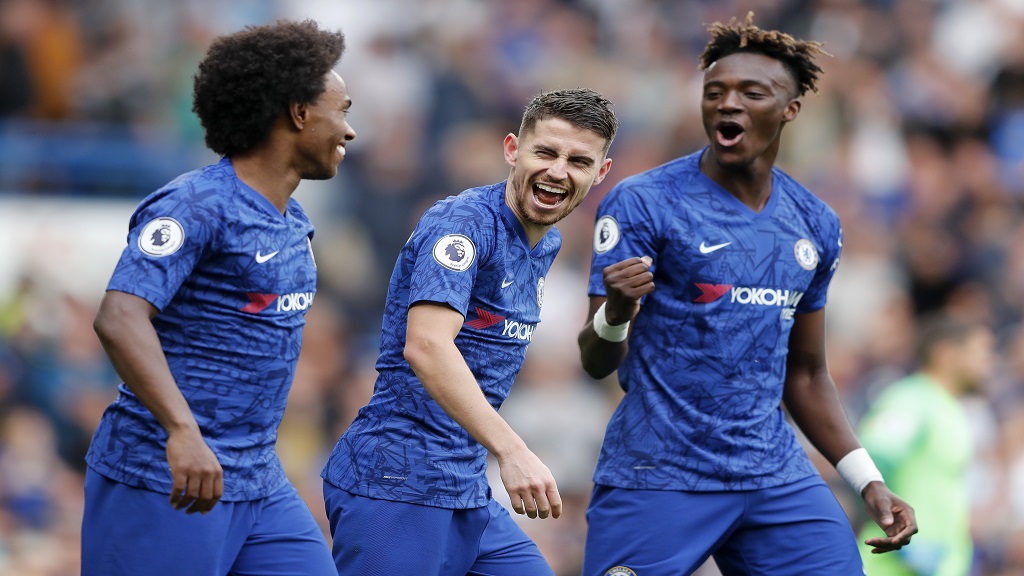 Liverpool's flawless start to their Premier League season continued on Saturday with a hard-fought 1-0 victory at Sheffield United thanks to Georginio Wijnaldum's winner.

The Reds were made to battle by the Blades and secured their seventh win in as many games after Dutch midfielder Wijnaldum's shot squirmed through the legs of Blades goalkeeper Dean Henderson.

Chelsea earned Frank Lampard his first league win at Stamford Bridge with a 2-0 victory over Brighton and Hove Albion, while top-four rivals Tottenham, who were reduced to 10 men, claimed a 2-1 win over Southampton.

Elsewhere, Wolves beat Watford 2-0, Crystal Palace battled to a 2-0 win against Norwich City, and Aston Villa's clash with Burnley and Bournemouth's match against West Ham both finished in 2-2 draws.

This was a day when Liverpool had to roll up their sleeves and get stuck in. Sheffield United did not give Jurgen Klopp's side an inch and the German had to squeeze every ounce of effort out of his players.

It was even more acute when Liverpool's front three of Mohamed Salah, Sadio Mane and Roberto Firmino seemed to forget where the goal was and errant finishing might have proved costly on another day.

Klopp's side have been renowned for their free-flowing football but they showed a grittier side against dogged opponents at Bramall Lane.

If they are to go one better than last season and beat Manchester City to the title that resilience, especially away from Anfield, is going to be key.

Lampard had gone into this game without a Premier League victory at Stamford Bridge – it was an itch he was absolutely desperate to scratch.

Chelsea thrashed Grimsby 7-1 in the EFL Cup on Wednesday to give Lampard his first win on home soil, but it is the league where the former England international will be judged and he needed three points against Brighton.

At half-time, with the scoreline goalless against the Seagulls, Lampard might have been more than a little concerned.

However, a penalty from Jorginho five minutes into the second half eased the nerves before compatriot Willian added a second to give Chelsea a routine victory.

This had all the hallmarks of being a miserable day for Tottenham head coach Mauricio Pochettino, but he ended up with a smile on his face.

A red card for Serge Aurier just after the half-hour mark and a howler from goalkeeper Hugo Lloris had the whiff of a Tottenham implosion.

Tanguy Ndombele put Tottenham ahead before Aurier was shown a second yellow card. Lloris then sloppily allowed Danny Ings to equalise when he casually received a Toby Alderweireld pass.

Harry Kane had Spurs ahead again before half-time but, playing the majority of the game with 10 men, Southampton had chances. Spurs, though, showed plenty of backbone to earn the three points.

Aston Villa missed the chance for a second league win after they were twice pegged by Burnley. Anwar El Ghazi put Villa ahead before Jay Rodriguez levelled. John McGinn had Dean Smith's side in front again, only for Chris Wood to equalise with nine minutes left.

Bournemouth's clash with West Ham also finished 2-2. Andriy Yarmolenko's third league goal of the campaign put the Hammers in the lead but Josh King equalised. In-form Callum Wilson then struck in the first minute after half-time only for Aaron Cresswell to secure a share of the spoils for the Hammers.

In the day's other games, Wolves banked their first three points of the season with a 2-0 victory over winless Watford, who prop up the rest of the table, thanks to a strike from Matt Doherty and Daryl Janmaat's own goal.

Crystal Palace clinched a 2-0 win over newly promoted Norwich to move into the comfort of mid-table following a penalty from spot-kick expert Luka Milivojevic and an injury-time strike from Andros Townsend.

WATCH: Liverpool may have to stay unbeaten to win the league