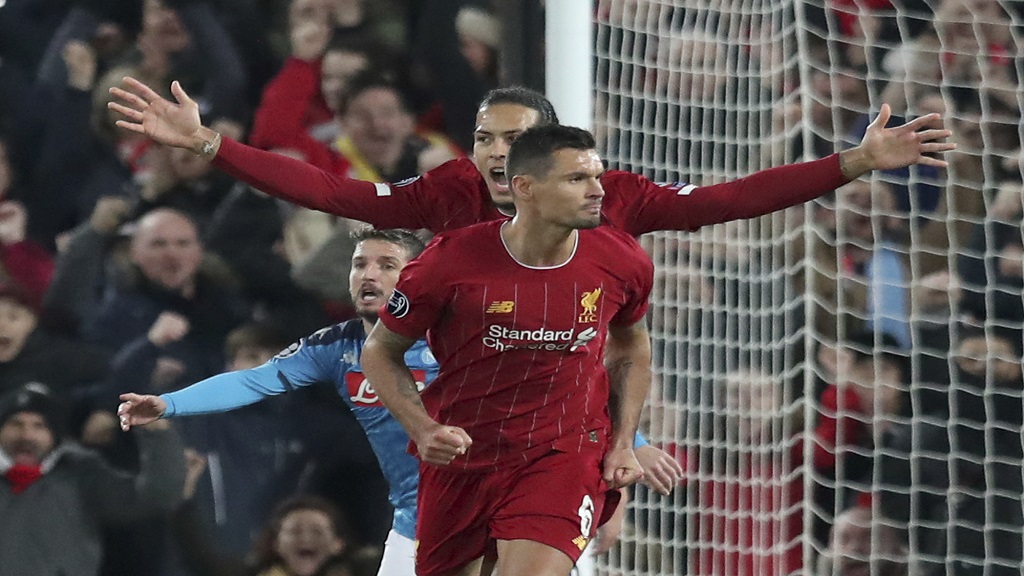 The defending champions played out a 1-1 draw with Napoli at Anfield on Wednesday to leave both teams’ qualification hopes hanging in the balance going into the final round of group-stage games.

Dejan Lovren headed home from a corner in the 65th minute to equalize after Liverpool fell behind to Dries Mertens’ goal in the 21st.

Liverpool maintained their one-point lead over Napoli in Group E but both can now be caught by Salzburg, which won 4-1 at Genk on Wednesday.

Liverpool play Salzburg away in their final group game — they are separated by three points — and the English club needs to avoid defeat or have a low-scoring loss by a one-goal margin to secure a top-two finish. Liverpool currently lead the head-to-head tiebreaker between the teams, having beaten Salzburg 4-3 at Anfield in October.

"We'd have liked to have won tonight to finish the job off,” Liverpool captain Jordan Henderson said.

That’s partly because the Premier League leaders could have done without another significant fixture next month — December is already full of them.

Starting on Saturday, they must play six games in the league before the end of the year. In the middle of December, they are scheduled to play two games in two days on different continents — the first against Aston Villa in the English League Cup (Dec. 17) and the second in the semifinals of the Club World Cup in Qatar (Dec. 18). They will also play a second match in that FIFA-organized competition three days later — either the final or the third-place playoff.

Napoli can advance from the group by beating already-eliminated Genk at home in their last group game.

"In (the Napoli) dressing room, they feel like they are already through and maybe they are,” Liverpool manager Jurgen Klopp said. “Everybody here thinks, 'Oh my God, it will be tough.' And it will be tough, that much is clear.”

Liverpool lacked any tempo in the first half, and wasn’t helped by an ankle injury to Fabinho that forced the defensive midfielder off the field in the 19th minute.

“That's massive,” Klopp said of the injury to the Brazil international. “It's early and we all hope it's not too serious but it's pretty painful and in an area you don't want to have pain, around the ankle."

Mertens scored soon after Fabinho went off, racing onto a long pass forward from Giovanni Di Lorenzo and drilling a low shot past goalkeeper Alisson Becker into the far corner.

The goal was subject to a review by VAR, which checked for offside against Mertens and whether the Belgium forward fouled Virgil van Dijk early in the build-up, but it was allowed to stand.

Van Dijk stayed down after colliding with Mertens in that incident, giving the Napoli player space to run through. After receiving treatment, Van Dijk continued.

Liverpool dominated the second half and got their reward when James Milner drove in a corner from the right and Lovren rose highest to head the ball from a central position inside the far post.

“We were not brilliant,” Klopp said. "We didn't have the biggest chances, maybe one or two. For tonight it might not be enough but it's still our situation.

“When we go to Salzburg, if we had done it tonight we would try to win there. So it's still our goal.”