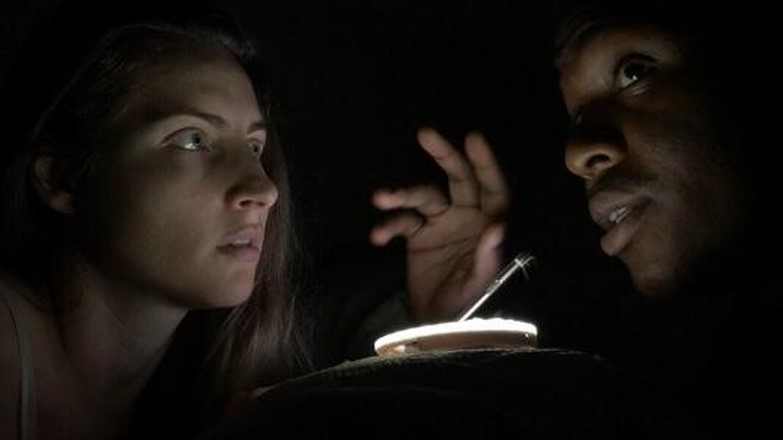 Steven M Taylor and his wife Rheem shot the three-minute long horror flick 19 with a cellphone and a flashlight at home.

How do you spend your time in quarantine if you’re a filmmaker who loves horror movies?

If you are Steven M Taylor, you make your own horror flick.

The end result is 19, a suspenseful short that racked up 1300 views in its first day of release online.

So riveting is the almost three-minute-long film, local reviewers have been giving it the thumbs up.

In his review, veteran actor and theatre director Che Rodriguez compares 19 to Alfred Hitchcock's famous Bathroom Scene in PSYCHO (1960), both in onscreen duration and dramatic tension.

“19 carries a sinister plot that parallels, very disturbingly, the present global zeitgeist that has quarantined us, against our will, into a universal dismantling of humanity that has us struggling for breath. There is no crucifix, no sunlight or water that is holy enough to sanitise and rinse us into a renewed salvation. Even the Washing Machine's alarm, in the establishing shot of the film ominously signals the end of its washing cycle,” he wrote.

The film is a clever imagining of the dark side of our present-day situation without the obvious references. The name 19 is taken from the scientific name of the coronavirus, COVID-19.

“I saw an article where a guy escaped from quarantine and the police was looking for him and I said why don’t we expand on it. What if he escaped and he returned to someone he knows,” Taylor explained to Loop.

The Taylors decided to shoot the film by themselves in the comfort of their home. His wife, Rheem, a Screen Actors Guild actress who has acted in shows such as ‘The Desperate Tale of Ralph’ and ‘Immure’ is the star.

We were watching a lot of Netflix and we said why are we consuming all this content, why are we not creating it? We can’t lose ourselves in just consuming content, we have to create. We developed the storyline, wrote the story that night and the next day we were shooting. We shot for three days, and edited in two,” said Taylor.

Navid Lancaster, who Taylor has been working with since his first film, Buck, The Man Spirit (2012) did the gripping soundtrack.

Perhaps the most interesting aspect of the making of 19, is that Taylor shot the entire thing on his iPhone 8 and a flashlight.

In his review on his blog Red Mango Reviews, Julian Neaves broke down the use of Taylor’s lighting.

“For Lighting there are three grades: the bright, almost sterile white light; the ominous half-light of the camera phone illumination; and finally the barely illuminated darkness where there are quick flashes of images.”

Taylor explained that the use of tools that are at everyone’s disposal was deliberate.

“We wanted to show creatives that we have more of what it takes to be creative. I made it my business to shoot on my phone with a flashlight and used free editing software to show that it could be done and you don’t need expensive equipment.”

He also did the film to show brands the possible content creatives can conjure up despite the limitations of life under lockdown.

“Creatives are also struggling with pivoting their business. I wanted to create content to show brands that they can partner with creatives to create content. I can use my platform to promote a brand and usher in a new wave of marketing. Once people see that brand association that is also mileage. In the first 24 hours we had 1300 people watching us across platforms,” Taylor said.

With the world riveted to cell phones and digital media now more than ever before, content is king. Taylor is intent on capitalising on the moment and is working on the release of two more projects, a film entitled Buck Begins and a TV show called Reel talk, featuring Trinidadian-born actress Lorraine Toussaint, with whom he worked.

A graduate of the University of Southern California's Masters of Fine Arts in Cinematic Arts, who has worked for Will Smith’s Overbrook studio and Will Ferrell’s Funny or Die Company among others, Taylor has always had ambitions of connecting Trinidad and the Caribbean with Hollywood.

Doing a film like 19, he said, shows the world what we are capable of. He said in the same week he produced the film, Shazam Director David F. Sandberg, also released, via Twitter, a three-minute horror short titled Shadowed starring his wife Lotta Losten.

Based on the feedback for 19, Taylor is open to fleshing it out into a longer feature film.

“For me right now, anything I put out I always envision a life beyond it. I am making a product for the audience, if they love it I am going in that direction so I want to develop it further which is why we didn’t kill off the character and didn’t have any blood so if we do a series we could still make it about these two characters,” he said.