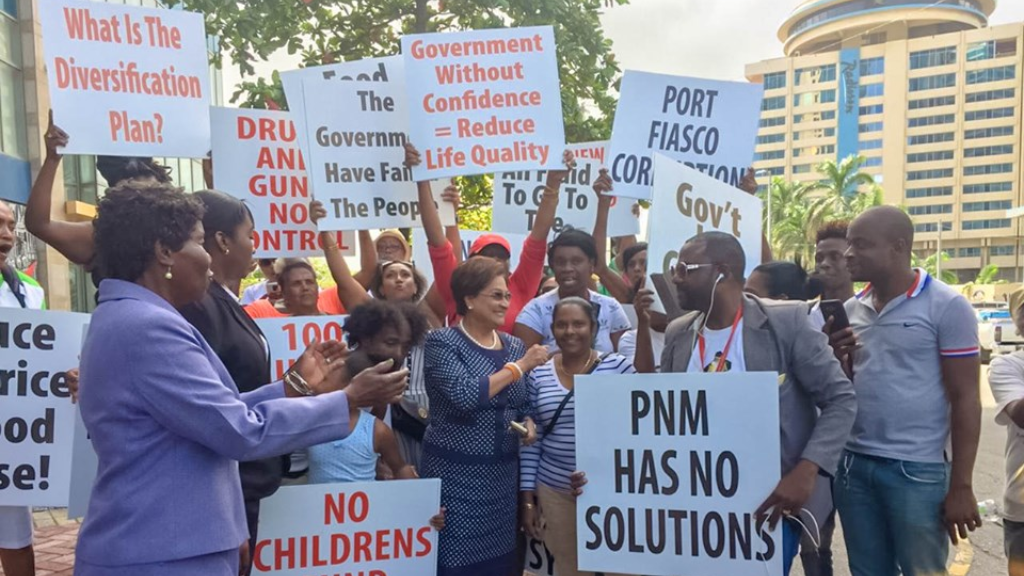 “We should lock down our borders immediately.”

Opposition Leader Kamla Persad-Bissessar made the call, as she greeted scores of protestors outside the Parliament building in Port of Spain on Friday.

The protests, which began on Thursday night and continued today, came as the Venezuelan nationals lined up across the country to get a last chance to register to work in T&T.

The protestors are calling on government to close the country’s borders.

“Rowley must go,” the group shouted as parliamentarians made their way inside the chamber.

Speaking with reporters outside the Parliament, the Opposition Leader claimed scores of Venezuelans nationals were entering the country every day.

“It is like we have an open door and every day more people are landing on our shores.”

She added that although the registration process ended today, more Venezuelan nationals are expected to enter the country as the borders are ‘wide open.’

The Opposition Leader stated that the ‘invasion’ would impact T&T tremendously.

Persad-Bissessar also criticised the government’s handling of the situation.

This, as she said government has no fixed policy.

“The anger of the people, I am seeing on social media is tremendous with respect to what is happening with the migrants. The fact that government has no fixed policy. There is a lot of anger in the society out there and government seems to be totally incompetent,” she added.

The Opposition Leader further urged the government to work with international bodies such as the United Nations Refugee Agency, to solve the issue.