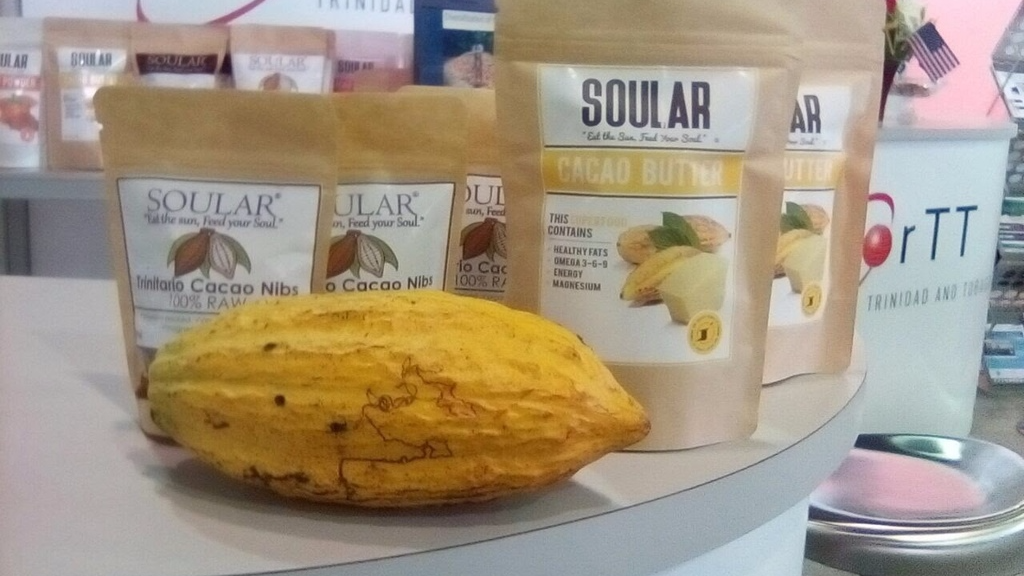 He is an entrepreneur, environmentalist and activist and recently added to his titles, that of candidate at the Arthur Lok Jack Graduate School of Business (Lok Jack GSB), Business Booster Commercial Incubator programme (BizBooster).

Soular is a natural foods Trinidad and Tobago based firm, which uses 100 percent local and regional organic inputs to produce banana products such as sun dried bananas from the Sucrier, Silk Fig and Gros Michel varieties, as well as sun dried cacao products, including raw cacao nibs, cacao powder, and Mayan Style brewing cacao (which is similar to brewing coffee).

It’s this spirit of innovation which drives Soular’s vision, its products have a unique flavour as result of its highly specialised production process which dries inputs at raw food temperatures.

By adapting and developing sun drying processes suitable for the local climate, their beans retain greater health benefits as compared to roasting.  Soular is also currently expanding its product line, working on market trials for plantain and cassava flour.

Having triumphed in the local market, Parris was spurred on to pursue his vision of conquering the global market by refining his distribution, sales and marketing strategies in order to become export ready.  Today, Soular is focused on its continued expansion into the North American and Asian markets, where it is particularly proud of its Mayan style brewing cacao which it exports to Asia. This unique concoction incorporates the cacao bean, the fleshy pulp around the bean and even the shell beneath; with its ‘unspiced’ flavour giving a true taste of the Trinitario cacao bean to Asian consumers.

Parris credits his growth and expansion initiatives with his participation in Lok Jack GSB’s BizBooster programme.

“Lok Jack GSB was absolutely critical to my personal growth as an entrepreneur.  Without the support from BizBooster and their amazing team which has guided, advised and mentored me, Soular would not exist.  From my first class with Candace Brathwaite, the Incubator Manager at Lok Jack GSB, to my relationship with my mentor and other key business contacts, as well as financial and operational support, the Lok Jack GSB business incubator programme has been indispensable to my firm’s development," he said.

Parris encourages fellow entrepreneurs to: “Always ensure that you have the right support when you are ready to start your entrepreneurial journey.  I cannot think of a better back-up than the Lok Jack GSB BizBooster team.  If your vision for your product or service is powerful enough, and you are willing to work hard and sacrifice, you will achieve success.  Don't let the fear of failure ever stop you from taking that first step.”

Brathwaite has supported Parris’s growth over the past three years, in fact, Parris says, “She has been the glue which tied my business together and the fire which kept me going when times were tough.”

Brathwaite, who manages the BizBooster Programme at Lok Jack GSB, “Soular has been one of the stars of our business incubator programme, which is designed to support the successful development of entrepreneurial companies in Trinidad and Tobago, through our offerings of an array of business support resources and services.  Incubators vary in the way they deliver their services, in their organisational structure, and in the types of clients they serve, at Lok Jack GSB our entrepreneurs are predominantly small and medium enterprises.

"Successful completion of a business incubation programme increases the likelihood that a startup company will stay in business for the long term, some studies found 87 percent of incubator graduates stayed in business, in contrast to 44 percent of all firms.  We are delighted to have supported Soular’s entrepreneurial journey, and having crossed the five-year mark in business, we believe that this firm is here to stay.  Our Board was especially delighted to learn about Soular’s foray into exports, and that it now holds the designation of one of the few Trinidad and Tobago firms to have broken the two-way trade barrier in the Asian markets.  This is how we measure our success at BizBooster, when we increase the ability of local firms like Soular’s to compete in national, regional and global markets.”

Soular's products can be purchased online at www.facebook.com/eatsoular, here you will also find a list of shops in Trinidad where it is available.