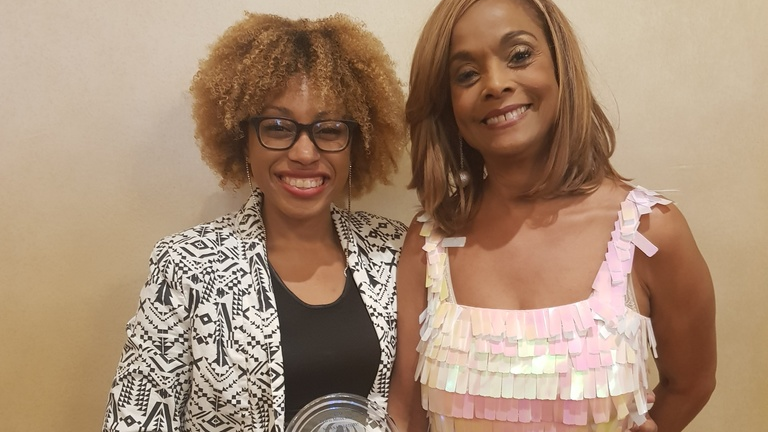 Loop's Ricqcolia Phillip has won the Best Feature by a Caribbean Journalist in Caribbean-based media at the Caribbean Tourism Organisation's Tourism Industry Awards.

Phillip, a Junior Broadcast Reporter at Looptt, topped the No Anansi Story category with her multimedia piece on Ubersoca entitled: UberSoca Cruise, the Caricom of the Soca Experience.

Phillip attended the popular soca cruise last year and wowed the judges with her passionate description of how the event brought the Caribbean together.

The winners of the 2019 awards were announced on Thursday night at the New Yorker hotel in Manhattan during an awards dinner hosted by former Miss Universe winner Penny Commissiong.

The awards pitted the best travel stories about the Caribbean against each other. Chief judge Mark Edwards said a record 180 entries were received this year.

Phillip was one of two Trinidadians announced winners during the ceremony.

Jeff Mayers, a photographer with the Newsday, won Best Photograph in conjunction with a Feature Article for a Carnival photo that was published in Panache magazine.

Other Caribbean winners were Kered Kiki Clement of Grenada who won for best Caribbean Blog Post and Jamaica for Best Social Media Campaign.

Earlier in the night special awards were given to longstanding tourism stalwarts among them Brend Hood, chairman of the Grenada Tourism Authority and Colin James, chief executive officer of the Antigua and Barbuda Tourism Authority who were among six receiving the Allied Award for outstanding contributions to the region's development.

The Allied Award was established in 2005 to recognise individuals within the CTO family – government, airline, cruise line, allied and affiliate members and CTO staff – who have done an extraordinary job of contributing, in a tangible way, to the sustainable development of the region.

Tourism director of the Cayman Islands, Rosa Harris, along with Laura Davidson, president and founder of Laura Davidson Public Relations, received the Jerry Award for the passion with which they serve the region. The award is in memory of Jerry Magit who represented the allied members on the CTO’s board of directors and recognises people who demonstrate a passion for the region and have dedicated time, energy, financial, and other personal and professional resources to its development.

Noel Mignott, president and chief executive officer of The PM Group, and Annette Stowe, internet and conference administrator at CTO-USA, Inc., received the Special Recognition Award for high performance. This award honours high-performance individuals whose contributions, particularly in the last year, have truly made a difference among the region or Caribbean community and/or industry. It is not limited to service directly in the travel arena, but for service in any ancillary industry that supports tourism and brings continuous positive recognition to the region.

Other media winners on the night were:

Best of the Best: Tony Perrottet

Best Feature by a Diaspora Journalist in US or Caribbean Media: Kevin Williams