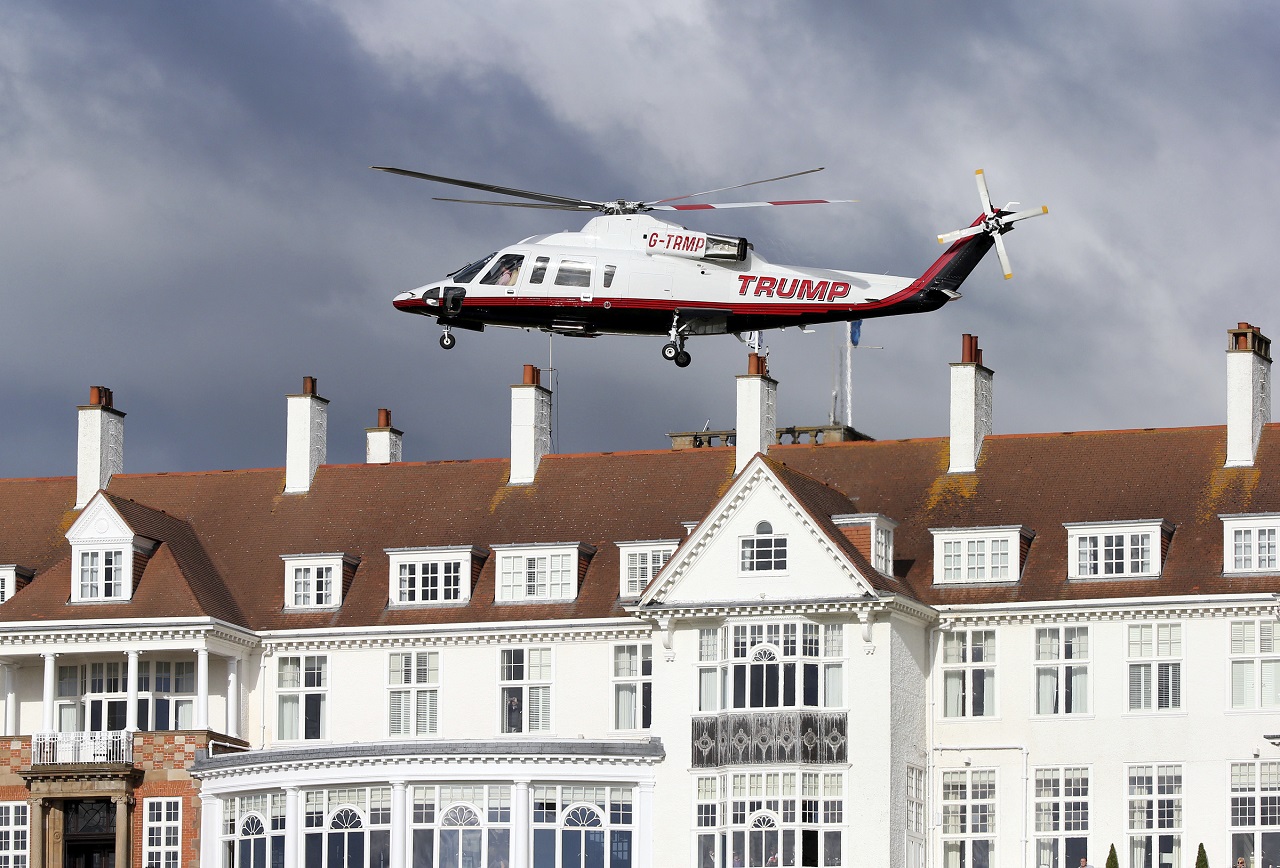 In this July 29, 2015 file photo, a helicopter owned by Donald Trump departs from the Turnberry golf course in Turnberry, Scotland, A financial report filed with the British government shows Donald Trump is losing millions for a third year in a row on a couple of his biggest investments: his Scottish golf resorts.

Donald Trump boasts of making great deals, but a financial report filed with the British government shows he has lost millions of dollars for three years running on a couple of his more recent big investments: his Scottish golf resorts.

In the report, Trump's company attributed the results partly to having shut down its Turnberry resort for half the year while building a new course there and fixing up an old one.

His company has faced several setbacks since it ventured into Scotland a dozen years ago, and its troubles recently have mounted.

The company has angered some local residents near its second resort on the North Sea with what they say are its bullying tactics to make way for more development. The company also has lost a court fight to stop an offshore windmill farm near that resort, drew objections from environmental regulators over building plans there in August and appears at risk of losing a bid to host the coveted Scottish Open at its courses.

Amanda Miller, a spokeswoman for the Trump Organization, declined to comment about the results.

Trump handed over management of his company to his two adult sons before becoming U.S. president, but still retains his financial interest in it.

It's not clear how big a role Trump's setbacks in Scotland have played in the losses. In addition to the Turnberry shutdown, the company also noted in its report that it took an 8 million pound ($10 million) loss due to fluctuations in the value of the British pound last year.

Trump's golf business is closely watched because he has made big investments buying and developing courses in recent years, a risky wager in a struggling industry. It is also a bit of departure for the company. Trump has mostly played it safe in other parts of his business, putting his name on buildings owned by others and taking a marketing and management fee instead of investing himself.

Much of the anger toward Trump in Scotland is centered around his resort outside Aberdeen overlooking the North Sea coast and its famed sand dunes stretching into the distance. Called the Trump International Golf Links, it is here that a local fisherman became a national hero of sorts for refusing a $690,000 offer from Trump for his land and where footage was shot for a documentary on Trump's fights with the residents, called "Tripping Up Trump."

Many locals praise the course for bringing in more tourists to the area and helping the local economy, but Trump's critics there are outspoken and now, with their target the U.S. president, playing to a worldwide audience.

The same day that the financial report on the resorts was released, an online petition by a global corporate watchdog group fighting Trump's plans for a second 18-hole course to the North Sea resort got signature number 94,860.

When Trump visited his North Sea resort in June last year, two local residents ran Mexican flags up a pole in protest against the then-candidate's immigration policies. It was a snub that came just after the U.K. Supreme Court ruled unanimously against Trump's efforts to stop the wind farm, a Scottish government decision to strip him of his title as business ambassador for Scotland and the revocation of an honorary degree from Aberdeen's Robert Gordon University.

Both the Scottish government and the university cited Trump's comments about Muslims during the campaign.

In July, the CEO of a major sponsor of the Scottish Open was quoted in a local newspaper casting doubt on Trump's chances of hosting the event.

"There's no decision made but, look, there are clear issues," Aberdeen Asset Management CEO Martin Gilbert was quoted saying. He added, "Politics aside, Trump would be an ideal venue — but you can't put politics aside."

Asked for clarification on Friday about what Martin meant by "issues" and "politics," Aberdeen Asset spokesman James Thorneley told the AP: "It's pretty kind of obvious, right?" Pressed, he said he would not comment further.

This summer, Scotland's Environmental Protection Agency and the Scottish Natural Heritage, a conservation group, sent letters to the Aberdeenshire Council urging it to reject Trump's plans for the second course if he did not make certain changes. A vote by the local government, expected in August, was postponed.

The global watchdog group behind the online petition, SumofUs, used the environmental objections in its plea for signatures. It also seized on Trump's reaction to the violence in Charlottesville, Virginia, to muster support, arguing that Trump's rhetoric has "bolstered white supremacists" across the globe.

Its argument on its website: "Now we have a chance to reject Trump's hatred and protect our environment in one fell swoop."

Still, the two courses are widely praised for their beauty, and tourists on buses like to stop by the North Sea course for a round.

Whether any of this will hurt profits at Trump's Scottish business in the long run is another matter.

In the financial report, Eric Trump, the president's son and a director of British subsidiary that owns the two resorts, included a letter expressing confidence that the resorts will attract plenty of golfers. He said Turnberry has received "excellent reviews" from its guests, and that the reopening of the resort is ushering in an "exciting new era" for the company.