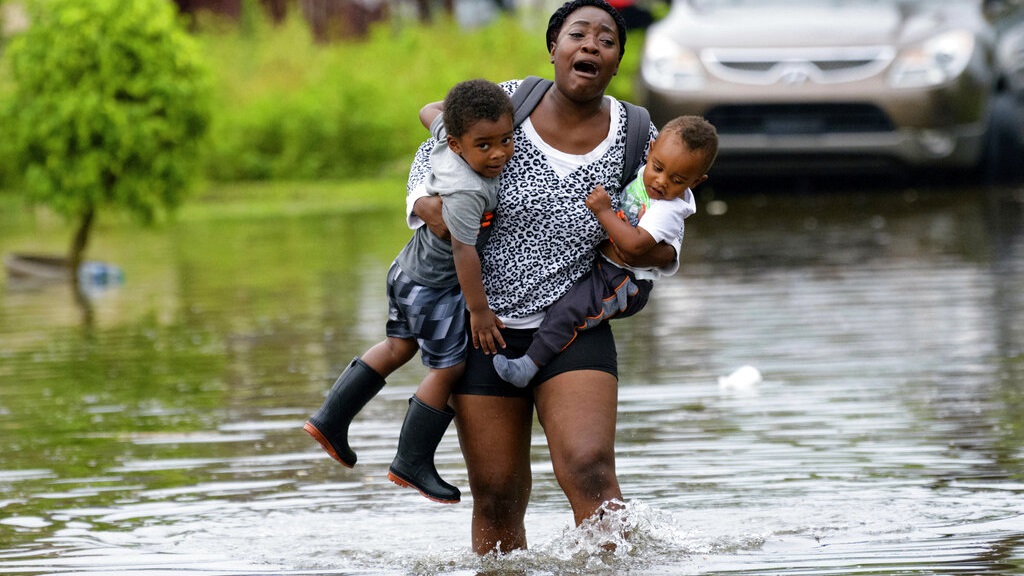 Terrian Jones reacts as she feels something moving in the water at her feet as she carries Drew and Chance Furlough to their mother on Belfast Street in New Orleans during flooding from a storm in the Gulf Mexico that dumped lots of rain Wednesday, July 10, 2019. (AP Photo/Matthew Hinton)

A potential tropical storm brewing in the Gulf of Mexico presents twin troubles for coastal Louisiana and Mississippi — the possibility that the flooded Mississippi River will be lapping at the tops of levees this weekend, and a danger of flash floods like the one that unexpectedly walloped New Orleans on Wednesday.

The Gulf of Mexico disturbance that dumped as much as 8 inches (20 centimetres) of rain in just three hours over parts of metro New Orleans was forecast to strengthen into a tropical depression Thursday, then a tropical storm called Barry Thursday night, and, possibly, a weak hurricane by Friday. 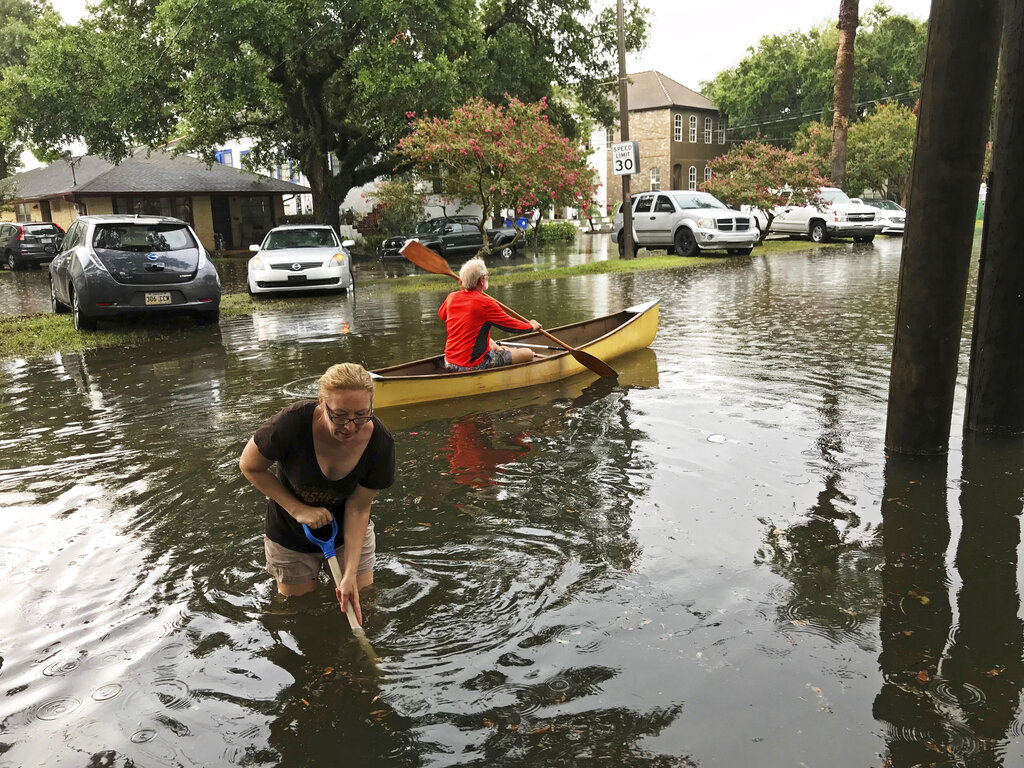 The biggest danger in the days to come is not destructive winds, but ceaseless rain, the National Hurricane Center warned: "The slow movement of this system will result in a long duration heavy rainfall threat along the central Gulf Coast and inland through the lower Mississippi Valley through the weekend and potentially into next week."

Forecasters said Louisiana could see up to 12 inches (30 centimetres) of rain by Monday, with isolated areas receiving as much as 18 inches (46 centimetres). And the storm's surge at the mouth of the Mississippi could also mean a river that's been running high for months will rise even higher.

Southeastern Texas also was at risk of torrential rains.

New Orleans got an early taste Wednesday of what may be in store. News outlets said a tornado may have been responsible for wind damage to one home, while floodwaters invaded some downtown hotels and businesses as streets became small rivers that accommodated kayakers. The floods paralyzed rush-hour traffic and stalled cars around the city.

It all happened fast.

"I must have got to work about a quarter to 7," said Donald Smith, who saw his restaurant on Basin Street flood for the third time this year. "By 7:15, water was everywhere." 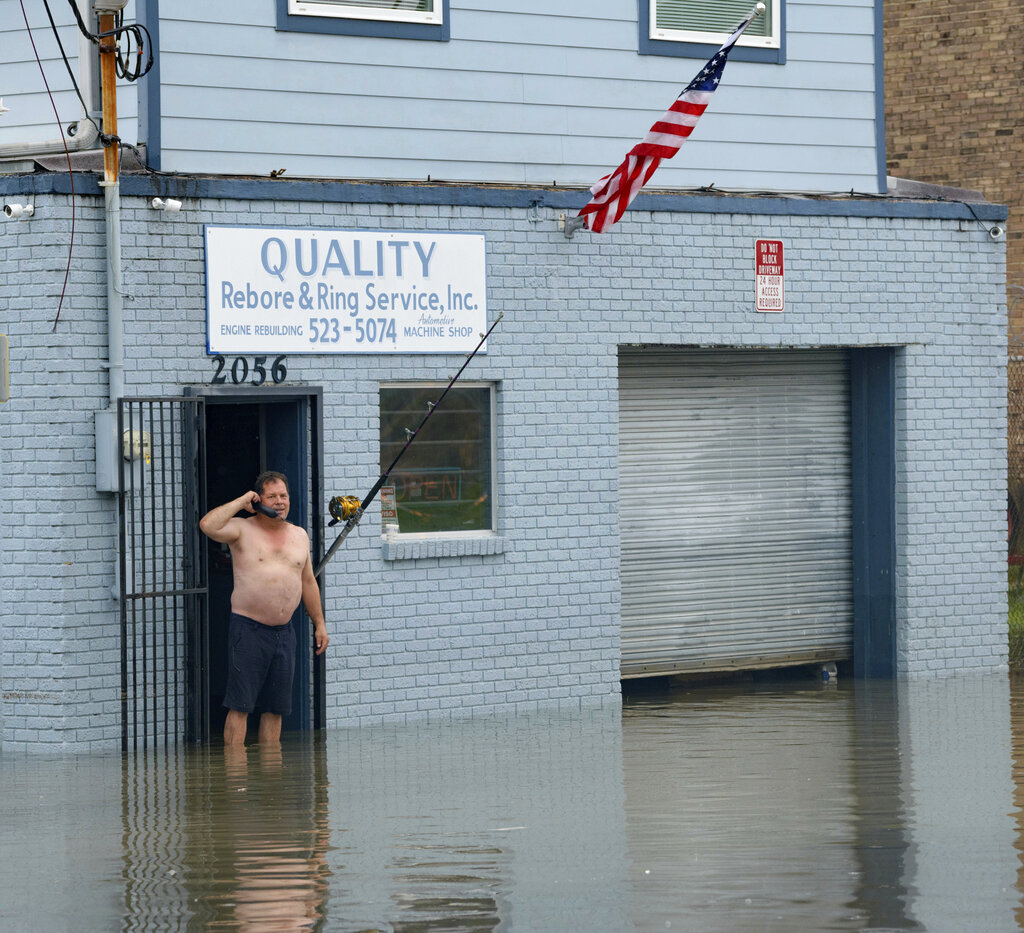 It brought memories of a 2017 flash flood that exposed major problems — and led to major personnel changes — at the Sewerage and Water Board, which oversees street drainage. City officials said the pumping system that drains streets was at full capacity. But the immense amount of rain in three hours would overwhelm any system, said Sewerage and Water Board director Ghassan Korban.

The Mississippi is already running so high that officials in Plaquemines Parish at Louisiana's southeastern tip ordered evacuations of some areas to begin Thursday. A voluntary evacuation was called on Grand Isle, the vulnerable barrier island community south of New Orleans. Gov. John Bel Edwards declared a statewide emergency in light of the gathering storm.

A spokesman for the Army Corps of Engineers in New Orleans said the agency was not expecting widespread overtopping of the levees, but there are concerns for areas south of the city. The weather service expects the river to rise to 20 feet (6 meters) by Saturday morning at a key gauge in the New Orleans area, which is protected by levees 20 to 25 feet (6 to 7.6 meters) high.

The Corps was working with local officials down river to identify any low-lying areas and reinforce them, spokesman Ricky Boyett said. He cautioned that the situation may change as more information arrives.

"We're confident the levees themselves are in good shape. The big focus is height," Boyett said.

Edwards said National Guard troops and high-water vehicles would be positioned all over the state.

"The entire coast of Louisiana is at play in this storm," the governor said.

New Orleans officials have asked residents to keep at least three days of supplies on hand and to keep their neighborhood storm drains clear so water can move quickly.

As the water from Wednesday morning's storms receded, people worried about what might come next.

Tanya Gulliver-Garcia was trying to make her way home during the deluge. Flooded streets turned a 15-minute drive into an ordeal lasting more than two hours.

"This is going to be a slow storm ... That's what I'm concerned about," she said.

Tourists Floyd and Missy Martin of Raleigh, North Carolina, were trying to make the best of it at a store with puddles on the floor where they were buying an umbrella, chips and peanuts, and two bottles of merlot.

"We could drown out our sorrows or make an adventure of it," Floyd Martin joked.