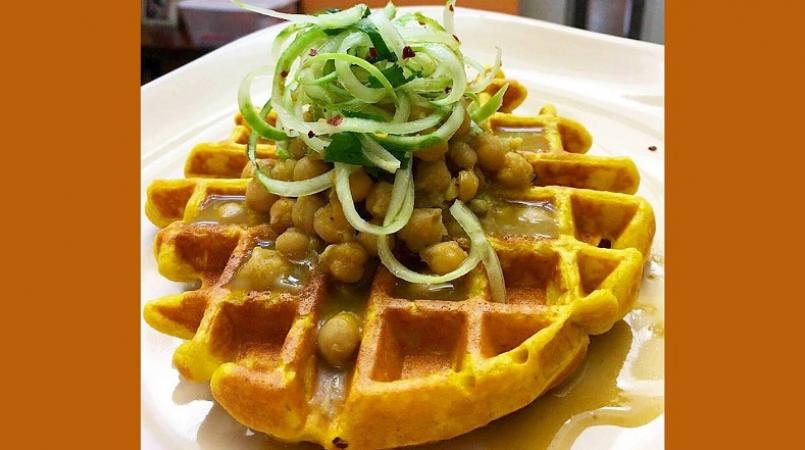 Doubles lovers are apparently undecided about a new spin-off of one of the country's most famous street foods, doubles.

Dubbed 'woubles', the new dish was shared to social media page Foodie Nation and has since gone viral, with widely varying responses from Trinis.

Chef Rishi Ramoutar of C&J Restaurant and Bar on Tumpuna Road South, Arima, came up with the new dish and shared it to social media to show friends his new recipe.

Some have called it sacrilege against the country's famous staple, while others are excited about this new low-calorie option.

"Ever heard of #woubles? This intriguing dish was conceptualised by Chef Rishi Ramoutar of C&J Restaurant & Bar. It's basically a #doubles prepared with "waffled" bara & topped with the usual curried #channa & #cucumberchow."

"A healthier alternative to the traditional deep fried method. Would you try this?"

“It's the same bara you're getting, it's just made in a waffle iron instead of being deep fried,” the blog said.

Foodie Nation says the new dish will be on offer at C&J Restaurant and Bar on Tumpuna Road South, Arima, but is not on the menu just yet.

Ramoutar said in a comment that the waffle is made from the same ingredients found in a bara, consisting of split peas flour and regular flour. However, the waffle shape eliminates the oiliness incurred through deep-frying, resulting in a healthier option.

“Hi folks this is my dish...I observed all the comments...its not my intention to interfere with the ppl food...it's my interpretation of it," he said, saying that it could help Carnival goers to still enjoy their doubles while keeping fit.

"Using the waffle bara I cut the calories to about 200, compared to the 400 a doubles usually is, and I did this without compromising on the integrity and taste of a doubles. I love doubles, my intention is always to try a globalise our beautiful cuisine.”

Speaking to LoopTT, Ramoutar said he initially came up with the alternative for his wife, who was trying to eat more healthy but still loves the taste of doubles.

He said he has thoroughly researched the art of making doubles, even going so far as to travel along with a doubles truck in order to learn the proper technique.

He says he loves doubles passionately and was just trying to present an alternative for healthy eaters.

Citizens were equally passionate in their responses, with some against and some for the dish.

“That's just wrong!! One does not simply mess with the anatomical structure of a bara & deign to besmirch its good name by calling it "woubles"....#sacrilege #desecration #blasphemy (sic)."

“I know it's a spin-off (of) Doubles but it just doesn't look appetizing to me a curry waffle NAH no thanks, what's next Shark and toast (sic)."

“Let them get away with this; next thing you know, they'll be introducing burritos for roti skins!!! I say NO (sic)."

However, others were excited about the new dish and chastised Trinis for not being more adventurous.

"After speaking with Rishi (woubles creator) I have to say this man is a genius!! Less calories, no oil, no frying, no muffin top!!! WIN!"

“It's disturbing to see how many closed minded people there really are in the world. No one said you had to eat it nor is it a replacement for the real deal: Have you critics ever been exposed to a creative persons process, food or otherwise? How y'all think "Doubles" was conceptualized in the first place? Anyway, keep creating Chef! I'm here for anything that elevates our culture or gets someone to try something new (sic)."

“Loving the creativity. Would definitely love to try this. I'm sure it's not meant to replace doubles, but just a fun way to repurpose its amazing flavours. Trinis need to stop being so narrow-minded and critical of our own."

“Dam, beautiful and very creative !! I imagine it will be rather crispy but oh so delicious. Thank you for sharing (sic)!”

What do you think? Would you try 'woubles'?