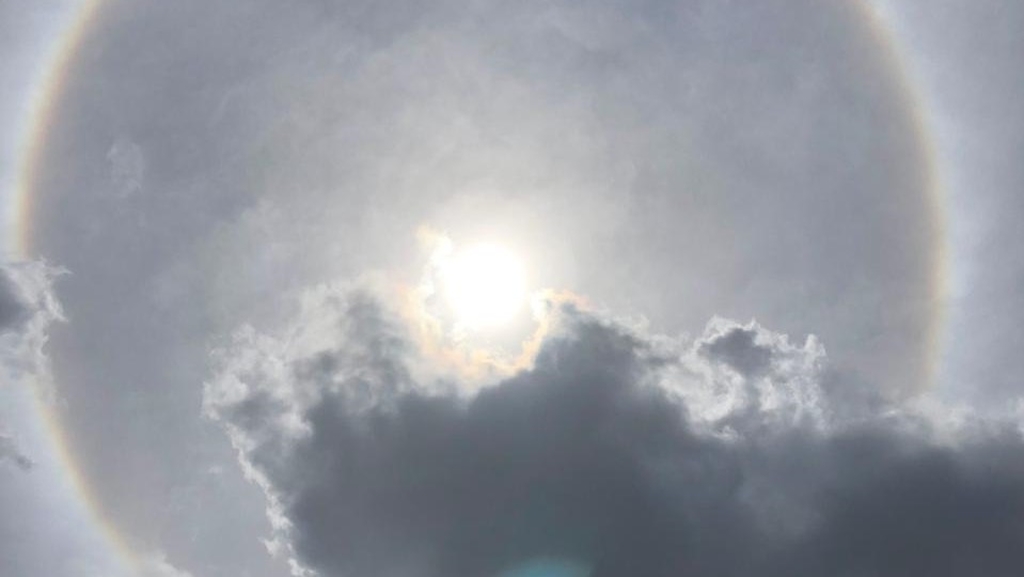 Just hours after an incandescent halo effect was seen around the sun, the public is being advised of a low (20 percent) chance of a heavy shower or isolated thunderstorm within the coming 48 hours.

The Trinidad and Tobago Meteorological Service said in its evening forecast that Thursday's weather will be partly cloudy and breezy with isolated shower, and a low (20 percent) chance of a heavy shower or even an isolated thunderstorm.

"Mostly cloudy with showery periods, improving as the day progresses. There is a slight chance the late morning to afternoon thundershower could occur in (a) confined area. Nighttime: Mostly settled except for the brisk light showers," the Met Office said.

The advisory comes after the presence of cirrostratus clouds were seen overhead on Wednesday, giving the sun a ‘halo effect’, which many people shared photos and videos of on social media.

Cirrostratus (Cs) is a composite of the Latin ‘cirrus’ (wisp or curl) and ‘stratus’ (layer) and refers to high-level clouds which appear as a thin hazy, uniform and featureless whitish and smooth veil.

It is made out of ice-crystals, which are pieces of frozen water.

Cirrostratus often produce halo phenomena, either partial or complete. They form at altitudes between about five and 10 kilometres (about 16,600 and 30,000ft).

According to the UK Meteorological Office, cirrostratus does not produce rain but it can signify weather deterioration.

“Though cirrostratus itself does not produce precipitation, it can indicate whether or not precipitation is likely. If cirrostratus nebulosus exists in the sky it is likely that and incoming warm front will bring persistent rain within a day, though if cirrostratus fibratus is spotted, stratus may proceed it, bringing only light drizzle.”

There is a halo in the sky, what does it mean?