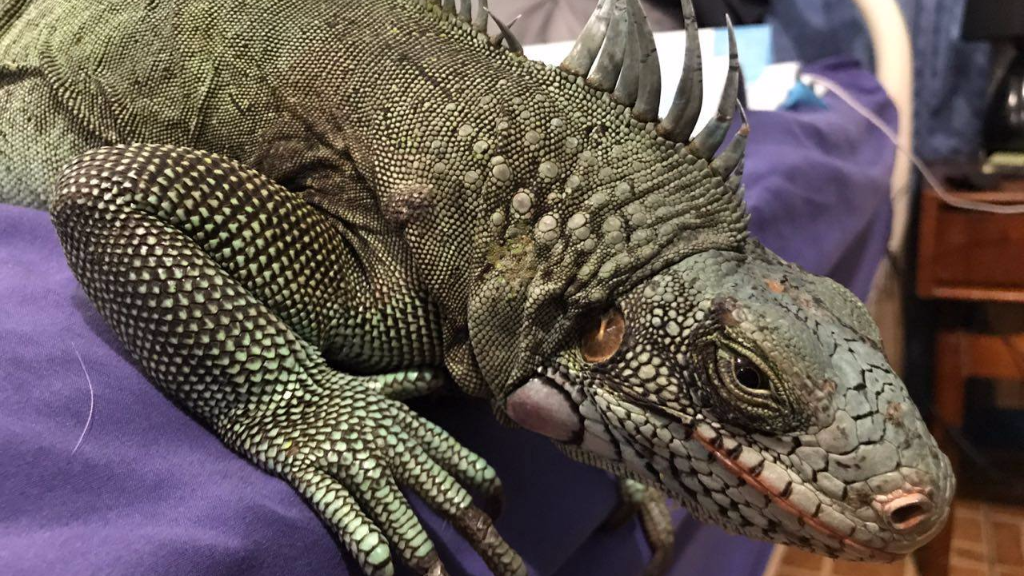 Veterinarian and former temporary independent senator Dr Kriyaan Singh shared photos of a rehabilitated iguana that had been trussed and tied up for sale and now has a new lease on life.

In a social media post to the La Romaine Veterinary Clinic on Sunday, Dr Singh showed photos of the iguana, named 'Iggy', as she slowly made her way back to health.

Dr Singh said last Thursday she was brought into the clinic and couldn't walk or swim properly as her muscles and nerves were damaged.

"A client of ours bought and subsequently rescued an iguana, lovingly called by the staff of La Romain Veterinary Clinic as "Iggy." From having her limbs tied to the back of her, her ligaments, muscles and nerves were damaged."

"On Thursday when she was presented to the clinic, she was examined and attempts were made to keep her legs in the correct position, such as splints and bandages were made, however that said night she pulled off the bandages and splints."

"We also tried swimming her on Thursday but she could not right herself. Every day Kriyaan Singh religiously engaged her in physiotherapy which entailed light exercise of her limbs. She soon regained her clawing abilities and today (Sunday 15th October 2017) she is swimming," the clinic said.

Some citizens expressed concern at the large numbers of wild animals, some pregnant or still babies, being hunted and sold for profit after the start of the hunting season earlier this month.

Dr Singh said although he agrees that there should be restrictions regarding the sale of wildlife for food, more importantly, he believes that animals should be treated humanely if they are to be sold.

"We need regulations for numbers and size as well as area restrictions. More than that we need animal welfare and rights laws to ensure animals that are for sale are kept humanely up to slaughter."

"The issue for me isn't the sale of the animals by hunters it's the inhuman way they are injured, limbs broken and tied in pain in (the) hot sun on a stick to be sold. The animal can be stored instead in a cage or drum for sale," he said.

In Trinidad and Tobago there are currently no bag limits regarding the number of wild animals one can capture, nor are there any restrictions regarding the sale of said animals.