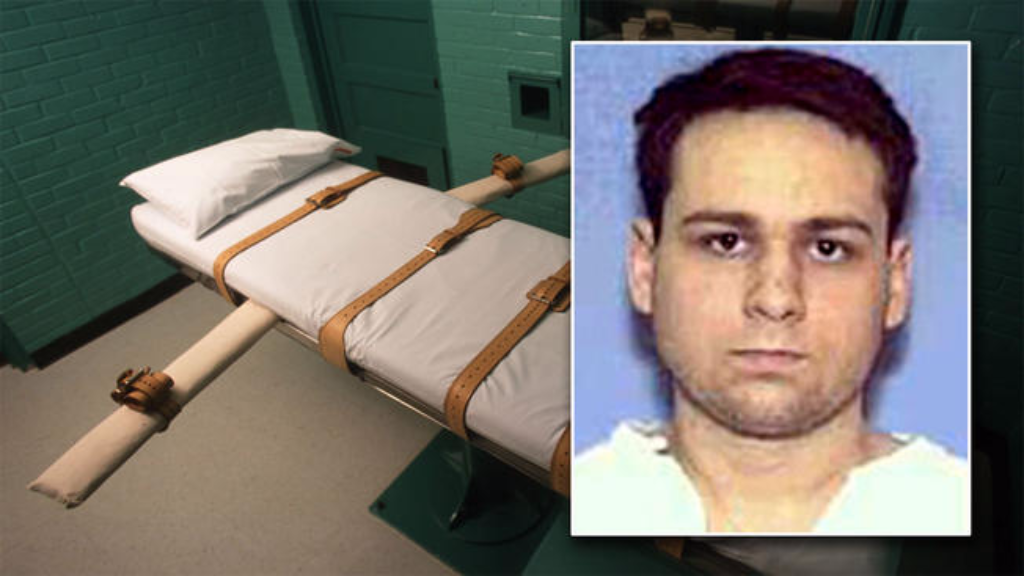 A man on death row for the notorious slaying nearly 20 years ago of a black man chained to the back of a pickup truck and dragged along a bumpy rural East Texas road will get his claim of innocence and poor legal representation reviewed by an appeals court.

The 5th U.S. Circuit Court of Appeals late Tuesday said it would review a claim from John William King that lawyers were deficient in presenting a case for innocence during his trial for what became one of the nation's most shocking hate crimes since the Civil Rights era.
King's appeal said that only a few pieces of circumstantial evidence that could be innocently explained tied him to the scene of a fight that resulted in 49-year-old James Byrd Jr. being chained at his ankles to the bumper of a truck in June 1998 and fatally dragged outside Jasper, about 125 miles (201 kilometers) northeast of Houston.

King, now 42, was the first of three white men convicted of capital murder for the hate slaying.  Each was tried separately.
King's attorney, A. Richard Ellis, raised five claims to the 5th Circuit, four of them focusing on what he said was King receiving ineffective legal help at his 1999 trial in Jasper. The fifth claim contended a federal district judge who rejected King's appeal denied him due process and a fair hearing.

The 5th Circuit rejected all but the claim questioning the trial attorneys' effectiveness regarding some of the state's evidence in the case. King's appeals attorney described the trial lawyers' response to the evidence as "confusing and disjointed," according to the court.

The evidence included a cigarette lighter engraved with a Klan symbol and King's prison name, "Possum," along with cigarette butts found at the crime scene and King's sandals stained with Byrd's blood. Other evidence at his trial included letters in which King wrote about launching a racist gang and tattoos on King's body that prosecutors said showed he hated blacks.
King's lawyers called three witnesses who testified for less than an hour at the guilt-innocence portion of the trial. The attorneys appeared to concede the conviction and hoped to save his life in the punishment phase. Jurors decided he should die.

King's lead defense attorney, Haden "Sonny" Cribbs, died in June.  His trial co-counsel, Brack Jones, declined comment Wednesday.
The appeals lawyer, Ellis, based in Mill Valley, California, did not immediately respond to a message left by The Associated Press.
The 5th Circuit gave Ellis 30 days to submit a brief on his claim. State attorneys then will have 15 days to respond.

The second participant in Byrd's killing, Lawrence Russell Brewer, 44, was executed in 2011.  Evidence at their trials showed Brewer, previously convicted of cocaine possession, and King, a convicted burglar from Jasper, met in a Texas prison where they got involved in a KKK splinter group and adorned themselves with racist tattoos.
The third man, Shawn Berry, 42, is serving life in prison. Evidence showed that after King was released from prison, he returned to Jasper, became friends with Berry and moved in with him.  Brewer later joined them.

Evidence and trial testimony showed the three men offered Byrd a ride in the early morning hours of June 7, 1998, and they all drove about 10 miles (16 kilometers) into the wooded county before stopping along an isolated logging road. A fight broke out and the outnumbered Byrd was tied to the truck bumper with a 24 1/2-foot (7.32 meter) logging chain. Three miles (4.8 kilometers) later, what was left of his shredded remains was dumped between a black church and cemetery where the pavement ended on the remote road. Fingerprints taken from the headless torso identified Byrd.

King, Brewer and Berry were in custody by the end of the next day.

Trump blasts NK over new report about its nuclear weapons