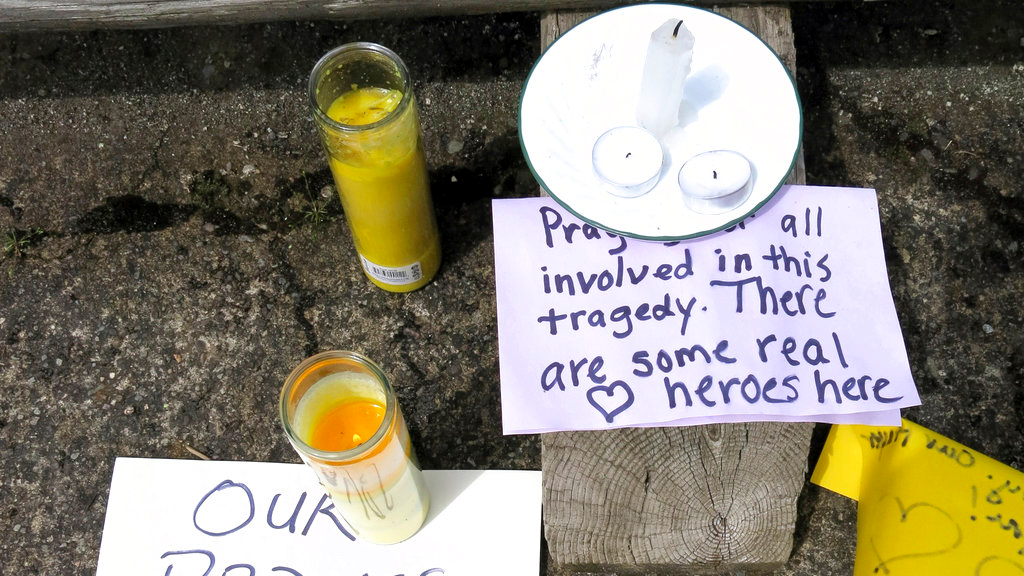 Well-wishing messages and flowers for an injured employee are shown outside a grocery store in Estacada, Ore., Monday, May 15, 2017. (AP Photo/Gillian Flaccus)

A man carrying what appeared to be a human head walked into a grocery store in Oregon and stabbed an employee just minutes before authorities discovered a woman's body in a home in a nearby town.

The gruesome and bizarre chain of events began Sunday afternoon when the man entered the Thriftway grocery store covered in blood and with "what looked like a large kitchen type of knife," Ernie Roberts, interim police chief in nearby Sandy, Oregon, said Monday in a phone interview. Sandy provides police services for Estacada, which has just 2,600 residents.

He was also carrying something that appeared to be a severed human head, Clackamas County Sheriff's Sgt. Nate Thompson said.

"He didn't say anything after he was subdued," Roberts said, adding that at one point before he was arrested the man told someone he was thirsty. "He was in like a catatonic state, wasn't speaking to anybody. That's why he was transported to the hospital."

Soon after the attack, someone called 911 to report that a woman's body was found at a home in Colton, a short drive south of Estacada.

Police did not say if the body was decapitated. Authorities were conducting an autopsy on the woman Monday and did not immediately release her identity.

The suspect and the stabbed grocery store employee have both been hospitalized. Both are expected to survive.

The attack sent shock waves through Estacada, where most residents knew the stabbing victim simply as Mike, a white-haired checkout clerk who had worked at the Thriftway store for years and was beloved by customers for his warm greetings and sense of humor. Customers stopped by in a steady stream to drop off balloons at a tribute for the employee in front of the store and to sign a giant get-well poster.

The store sits at the center of a tiny downtown in Estacada, across from a pharmacy and next to a diner that buzzed with news of the crime during the lunch rush on Monday. Estacada is about 30 miles south of Portland.

A small collection of candles also grew on the other side of the parking lot, just in front of yellow police tape that covered nearly an entire block.

Inside Lew's Drive-In, customers talked of nothing but the stabbing and of Mike, whom everyone seemed to know.

Customers who had been in the grocery store during the stabbing took refuge in the diner Sunday, but nobody had seen much, said Marvin Flora, the diner's owner.

"It was traumatic, but it happened so fast that nobody really saw what was going on," he said. "One lady came in this morning and said she actually saw somebody come in with something that was bloody and was carrying something with his arm."

But she couldn't see what it was, Flora said.

As residents swapped stories, Flora stood by a growing cluster of balloons and shouted out details of Mike's condition to drivers who slowed along the main street to check in.

"He's super nice and outgoing. He's the epitome of what this place stands for," he said. "He always has jokes for you in the line, and he goes out of the way to know your name."

US brings in more technology to fight drug smuggling at sea