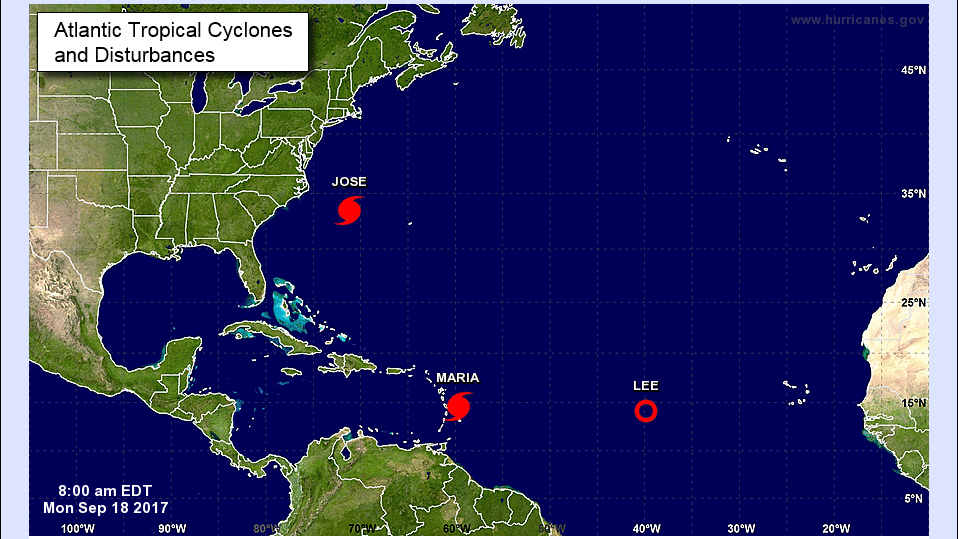 Hurricane Maria has been upgraded to a Category 4 hurricane as its eye is making its way to Dominica.

The National Hurricane Centre said Maria is packing maximum sustained winds of 130 mph (215 kilometers per hour), bringing the chance of life-threatening storm surge, accompanied by "large and destructive waves," and "hitting the Leeward Islands, the Virgin Islands, and Puerto Rico."

According to the NHC, the eye and the intense inner core of Maria is expected to pass near Dominica during the next few hours. Forecasters believe heavy rains will lead to mudslides and "life-threatening flash floods across the Leeward Islands, including Puerto Rico and the US and British Virgin Islands."

Maria was centered about 35 miles east-southeast of Dominica and 55 miles northeast of Martinque around 5 pm, the NHC said. The extremely dangerous storm was moving west-northwest at 9 mph.

The centre of the hurricane will move across the Leeward Islands late today and tonight, and then over the extreme northeastern Caribbean Sea Tuesday and Tuesday night.

A Tropical Storm Warning is in effect for Antigua and Barbuda, Saba and St. Eustatius and St. Lucia.

A Tropical Storm Watch is in effect for St. Vincent and the Grenadines.

The Met Office said the progress of this system is being closely monitored and added that Trinidad, Tobago and Grenada and its Dependencies will experience an increase in cloudiness and showery activity beginning near midnight tonight. The Met Office said some of these showers will become heavy and thundery at times and accompanied by gusty winds and is associated with outer cloud bands and feeder-band activity from Hurricane Maria.

Members of the public are advised to be alert to the possibility of electrical discharges from thunderclouds. Sea conditions are forecast to deteriorate as well, becoming moderate or even rough at times and citizens with marine interests are urged to proceed with caution.

Those with interests in the Lesser Antilles are advised to pay close attention to the information being issued by the Met Office.

The Met Office stressed that the country is not under any tropical cyclone threat, watch or warning.