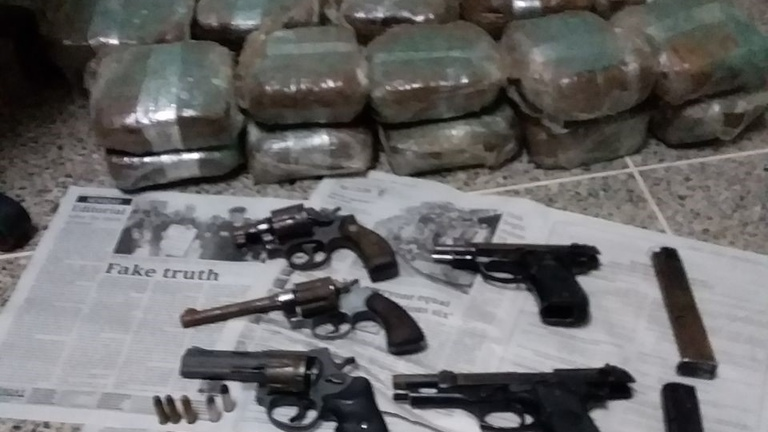 Seven firearms and an estimated $100,000 in marijuana were seized on Saturday morning during a police exercise in Cedros.

The exercise was led by officers of the South Western Division Task Force, under the supervision of Snr Sup Neville Adams, with assistance from Sgt Harripersad and Cpl Singh, among several others.

The officers, acting on information received, made their way to a beach off Columbus Bay Road in Cedros around 12:05 am today.

Around 3:40 am, they observed a boat with two passengers.

The vessel came ashore and the two men disembarked.

They took a bag with them and placed it on the shoreline.

The lawmen saw an opportunity to intercept the two men, however, they were unsuccessful.

The suspects fled the scene on foot, escaping in the forested area near the beach.

The bag was seized and when it was examined, the lawmen found 20 packets of marijuana as well as seven firearms – namely three .38mm Revolvers and four 9mm pistols.

One of the weapons was loaded with five rounds of .38mm  ammunition.

The 20 packets were said to have a combined weight of 10.8 kilogrammes.

The bag and the vessel are expected to be examined by crime scene investigators for fingerprints.

Cops destroy $3 million worth of marijuana in Biche

Police destroy $200K worth of marijuana in eradication exercise