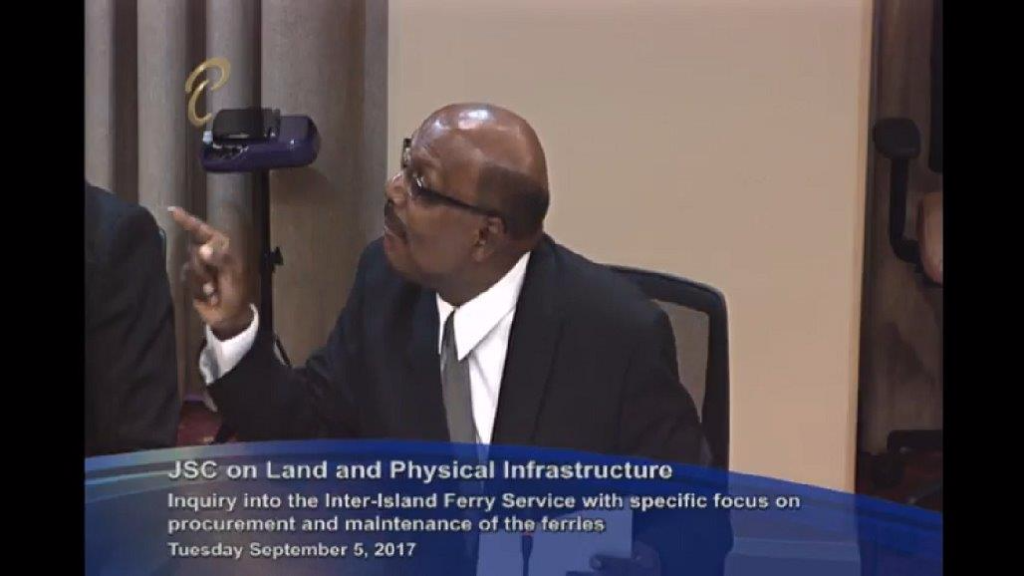 Comments were made regarding a ‘stench’ surrounding the actions which led to the departure of the Super Fast Galicia by member of the Joint Select Committee on Land and Physical Infrastructure, Wade Mark.

Speaking at the committee meeting’s second session on Tuesday to address the problems affecting the country’s cargo and fast ferry services, Mark called the issue a “manufactured crisis”.

Despite accounts that the Board and the Ministry of Works and Transport both agreed to an 18-month extension for the Super Fast Galicia until October 2017, Acting Permanent Secretary Sonia Francis-Yearwood said to her knowledge there was no record of a note being submitted to Cabinet.

Mark said that this pointed to a serious dereliction of duty on the Ministry’s part.

“Is the acting Permanent Secretary telling us that in spite of all those agreements, the Ministry stalled, the Ministry sat and refused to prepare a Cabinet note? Well if that is not dereliction of duty then the Ministry and its officers must take full responsibility for the crisis that has taken place in Tobago.”

Mark said his information was that a Cabinet note was taken to Cabinet by the Ministry and rejected by Cabinet.

He added that Prime Minister should be present at the committee and should account for the ‘debacle’.

“There is a stench emanating from the state room and we need to get to the bottom of it, why did that note not go to the Cabinet? This is a manufactured crisis and I’ll tell you, when the Prime Minister is invited here he will have to account for this debacle,” Mark said.

Mark also questioned the timing of the creation of Bridgeman Services Group, which was mere days after the September 2015 general election.

“A company was formed on September 29, 2015, called Bridgeman Services Group, that was a couple days after a general election in Trinidad and Tobago. I want to go on further to tell you that on the 16th of December 2015, some 23 days after the new board of commissioners of the Port Authority was appointed, the board of that PATT took a decision to terminate…the government took a decision to terminate the Super Fast Galicia contract,” he said.

Lewis fights back against Sahadeo 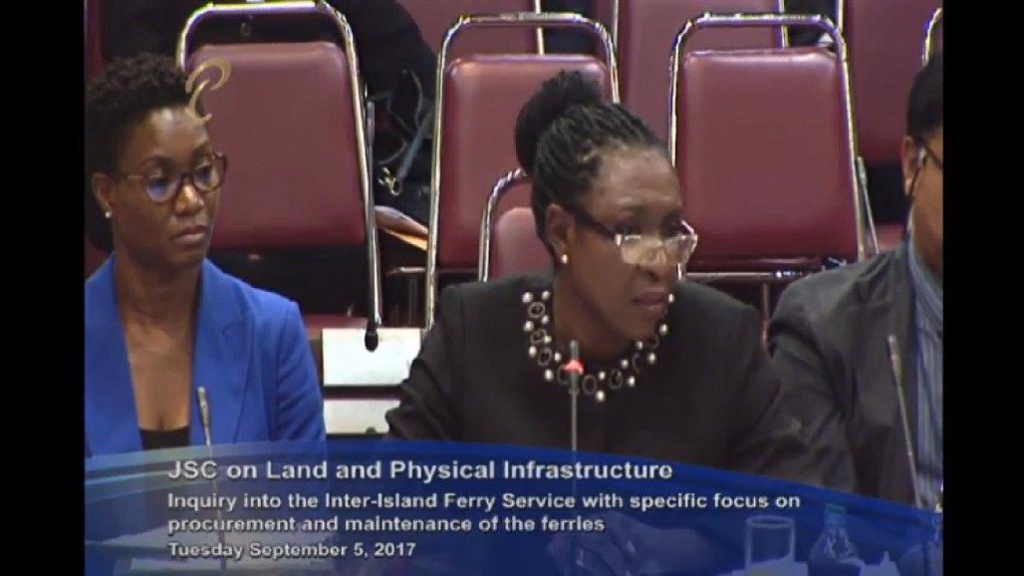 Speaking at a Joint Select Committee (JSC) discussing the circumstances regarding the departure of the Super Fast Galicia, Lewis said Sahadeo disagreed with the board and recommended maintenance dredging by employing the services of Kallco Limited, as well as alleging that Sahadeo altered meeting minutes.

“There were two other letters of complaint on the behaviour of Mrs Sahadeo because she was operating as an executive chair, she was calling a general meeting to the exclusion of the general manager, she was changing minutes…I wrote the Minister as well, as one of the accountants, complaining about her.”

She also clarified that the board met with the head of Intercontinental Shipping, John Powell, and recommended a three-year contract with an option to renew for one year, not five years.

“I am concerned that it is being suggested that this rogue management went to the Ministry,” she said.

In response to questions regarding the lack of a charter party agreement securing the 18-month extension for the Galicia, Lewis said that the Port Authority did do a draft Cabinet note which was sent to the Works and Transport Ministry, however, she was unaware of what happened after that.

Lewis also spoke passionately after Committee member Franklin Khan called her comments ‘hearsay’, despite Lewis’ assertions that she had documents to support her statements.

“I appreciate the opportunity to come here and share with the committee some of the facts that were missing from the deliberations thus far and I feel that we should be allowed to speak freely and not be cut off by your members, because the public should be allowed to hear the truth, notwithstanding the attempts being made to shut me down,” she said. 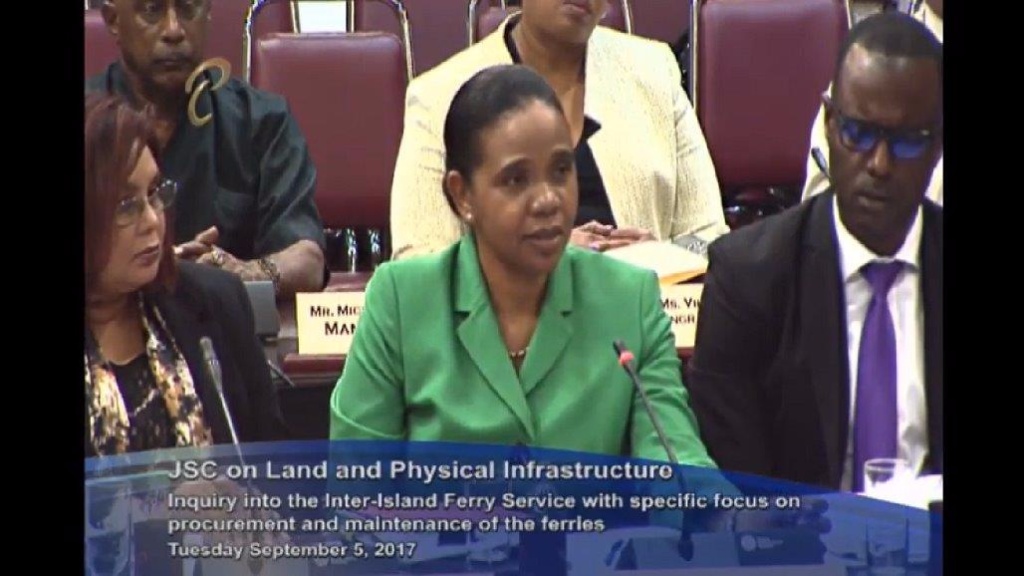 Records show that a whopping TT$18 million was paid for the Super Fast Galicia before the vessel even began its route between Trinidad and Tobago.

Francis-Yearwood confirmed in response to questions by Committee member Franklin Khan that the vessel was due to begin from May 1, 2014 but did not arrive until August 4, 2014.

However during this period the owners of the vessel were paid $18 million, prior to the ship commencing service.

“So this country paid Intercontinental the sum of $18 million for services not provided because the contract date start was May 1, and the vessel didn’t actually begin working until August 4, I just want that to go on the record,” Khan said.

He added that in April 14, 2014, a cheque was sent from the Ministry to the Authority to be placed in an account, on hold, until a contract was executed.

“Something about this company and this boat found favour with the then-administration,” Khan said.

When asking whether this was normal practice, Francis-Yearwood replied that she had not encountered such an activity in her many years of service.

When asked who could have initiated an event like that, she replied that that would have been an activity between the then-Ministry of Transport and Ministry of Finance.

Bridgemans not registered in T&T yet 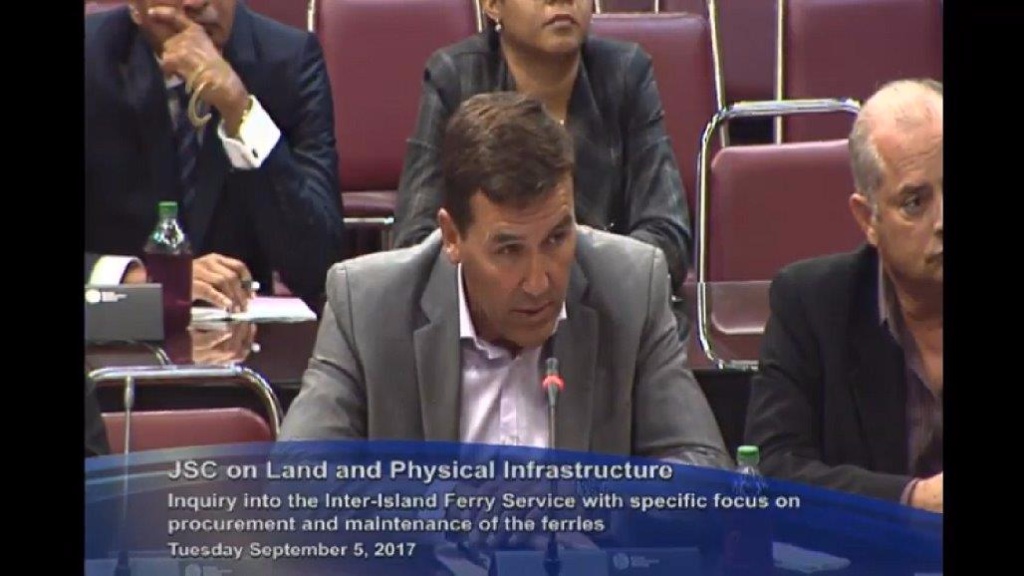 Also present at the committee on a voluntary basis was Vice President of Bridgemans Services Group, Andrew Purdey.

When asked whether Bridgemans had registered a local company, Purdey’s representative said that the company was in the process, but had not yet registered its company in Trinidad and Tobago.

Purdey said his company was initially contacted regarding the tender for cargo and fast ferry services by international brokerage company Horizon.

When asked by Mark whether he was aware that the Works and Transport Ministry denied being aware of Horizon, Purdey said he was not.

He agreed to provide information on the company and its staff.

Purdey said that prior to signing a charter party agreement with government in July, the company had a Memorandum of Association (MOA) for the purchase of both vessels.

“We had an effective ownership through an MOA that had a 48-hour line, so we were going to purchase the ships on execution of the contract. The contract was executed, we purchased the ships and then the ships were demonstrated to be in our full ownership before the contract came alive,” Purdey said.

Purdey said his company has had ‘several ships’ prior to the Cabo Star and Ocean Flower 2.

The Port Authority said moving forward it intends to develop a strategic/organizational plan by year end to treat with the many organizational deficiencies that affect its day to day operations. Governing Legislation of the Port will also be reviewed.

The Board said it has invited tenders for a new fast ferry to support the seabridge, while government has also indicated its interest to purchase a design build cargo vessel which meet the needs of the Trinidad and Tobago. The PATT has submitted specifications to the Ministry for approval.

The Board of the PATT also intends to implement a multidisciplinary evaluation team which will include the expertise of PATT and members of the Ministry of Works and Transport.

The full sitting can be viewed online here: https://youtu.be/E36mGgzLhOE

Port Authority: No monies paid to Bridgemans for ferry agreement