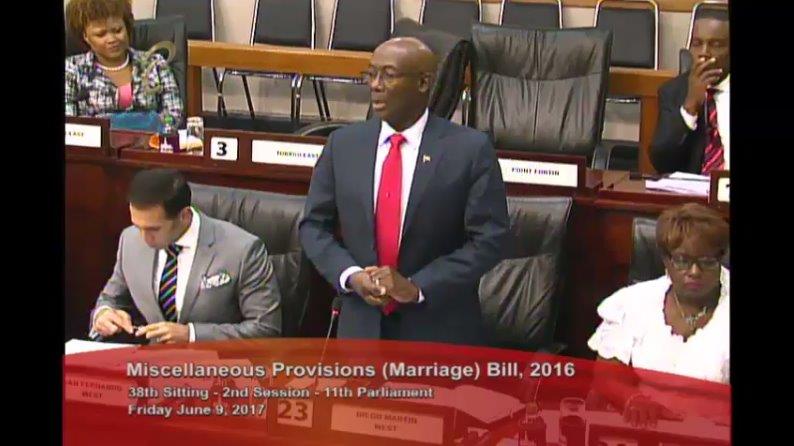 The Miscellaneous Provisions Marriage Bill 2016, has been passed.

The Bill was passed in Parliament on Friday without amendments, with 35 members voting for, zero against and zero abstentions.

A smiling Attorney General Faris Al-Rawi said he was elated that the Bill has been passed and thanked the members of the Opposition bench for supporting the Bill.

Contributing to debate on the Bill just before it was passed unanimously in the House, Prime Minister Dr Keith Rowley took Opposition leader Kamla Persad-Bissessar to task for her defense of Sanatan Dharma Maha Sabha Secretary General Sat Maharaj over his position on child marriage.

He noted what he described as an unusual occurrence, in the Opposition bringing members of the different faiths to present their views - child marriage defences.

"If the Opposition leader in this house defending Sat position, that is allyuh position," he added.

Rowley said Government was intervening and speaking on behalf of those who cannot speak for themselves.

Bhoe Tewarie: Why so much fuss over Marriage Bill?