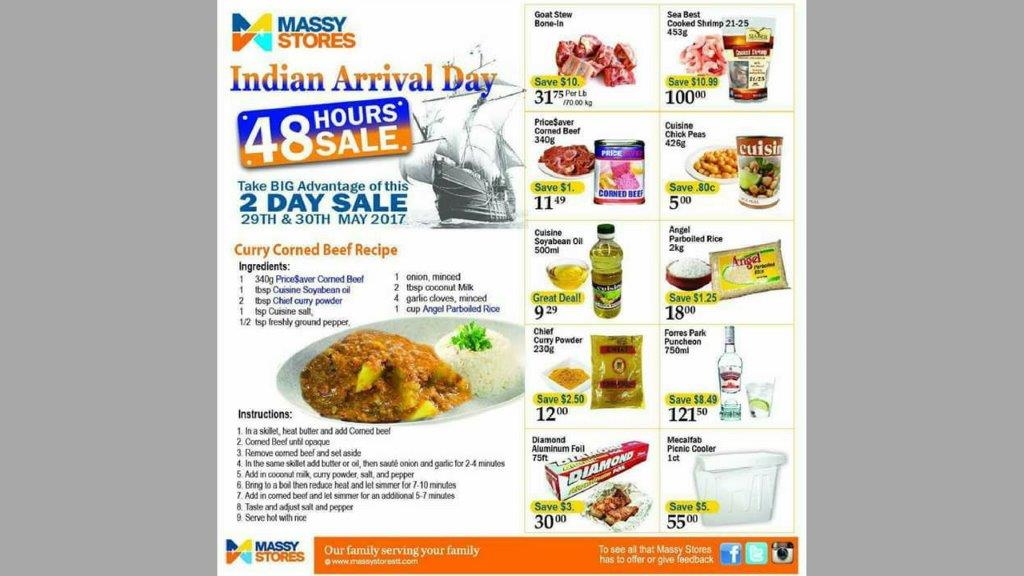 For Indian Arrival Day, companies across Trinidad and Tobago chose to commemorate the day with advertised greetings to the Indian community. And many people enjoyed a lunch consisting of some form of curry, in appreciation of Indian food and culture.

But one company is facing backlash for its advertising of "curried corned beef" as the delicacy of choice for the day.

Former Commonwealth Youth Ambassador of Trinidad and Tobago Nicholas Morris has criticised Massy Stores for the advertisement, which he says was blatantly disrespectful to the Hindu community.

In a release, Morris said the cow is a sacred animal to members of the Hindu community, who make up much of the Indian population in Trinidad and Tobago.

He said it was therefore inappropriate to promote a dish like curried corned beef on Indian Arrival Day.

"I am deeply disturbed and disheartened by the blatant disrespect and disregard which Massy Stores have demonstrated towards the Hindu Community in their Indian Arrival Promotional Advertisement," he said.

"Indian Arrival Day is not a religious Holiday however it commemorates the arrival of a group of people whose faith was predominantly Hinduism. It honors a local diaspora which is made up of large number of Hindus and it marks the arrival of people from a land where the cow is still sacred today."

Morris said as a nation celebrating 172 years of East Indian presence, citizens of Trinidad and Tobago must be mature and respectful of each other's principles, teachings and practices."

"It is quite erroneous and insulting that Massy sought to offer or promote "Curried Corn Beef" on such a significant and defining day within our nation's history," he said.

"As non Hindu I stand with my Hindu brothers and sisters and demand an apology from the management of Massy Limited. Failure to do so would indicate that Massy does not value the support and business of the local Hindu Community within Trinidad and Tobago."

However, persons across social media had differing views on the matter with some supporting the company.

One poster said he did not see a problem with the advertisement as Hindus do not represent the entire Indian community.

Another poster said the ad would be distasteful if it had been published on Divali. He said however that Indian Arrival Day was not a religious holiday and the criticism was much ado about nothing.

Massy has since apologised for the ad in a private message to Morris which he posted to his Facebook page.

The apology said in part: "Please accept our sincerest apology for our lack in cultural awareness when it comes to the items placed in the ad for Indian Arrival Day....Whilst this is inexcusable, we do hope that you accept our apology in good faith since we have certainly marked it as a learning lesson moving forward.