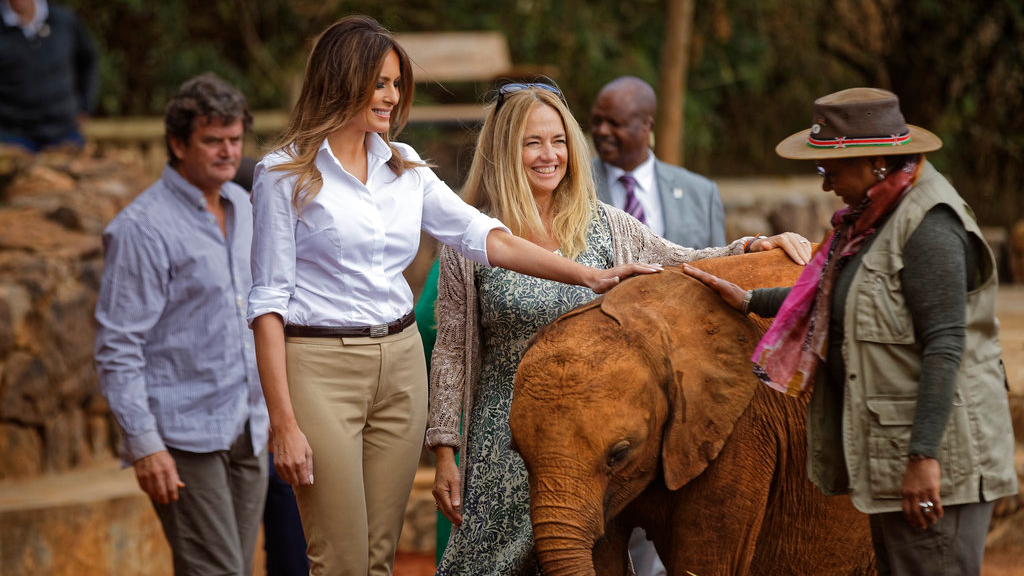 Melania Trump sashayed to the beat of African music as she was welcomed to an orphanage in Kenya on Friday.

Children living at The Nest in Nairobi greeted her with singing and dancing, and it didn't take long before the typically reserved U.S. first lady gave in to the moment. She walked up a pathway holding hands with two children, then began to sashay to the beat as she approached the building.

She was briefed on the children living at the house for babies. Some of them were abandoned or their parents are incarcerated. She was surrounded by babies either sitting in walkers or lying on their backs beneath playmobiles.

Staff praised her for visiting.

"Thank you for what you do and taking care of them," Mrs. Trump said while holding a baby girl originally handed to her wrapped in a blanket bearing the logo of Be Best, the child welfare initiative she launched this year and is promoting during this week's Africa visit.

She returned the girl and kneeled down to lift a boy from a mat and turned to face the news media with him in her arms. "Do you see the cameras?" she said to the boy before cradling another baby.

The singing and dancing continued outside, where she read a story to the same group of children who had walked up the pathway with her. A boy read a story to her in turn. After the readings, she was encircled by the singing children and danced some more.

Mrs. Trump is on her first visit to Africa and her first extended solo international trip as first lady.

She opened the Kenya portion of her visit earlier Friday, seeking to highlight conservation efforts by feeding baby elephants at Nairobi National Park and going on a safari there.

The first lady laughed after one elephant in the group of 18 made a sudden move and she momentarily lost her footing. She fed formula to two of the elephants that are being raised at the park and reached out to others, patting one's back and stroking the ear of another.

Dressed in riding pants, boots and a white safari hat, she climbed into an open-air vehicle for the safari, taking photos on her iPhone and peering through binoculars for a closer look at zebras, giraffes, impalas, rhinos and hippos bobbing in water.

She also saw a site where 105 tons of ivory was burned as part of an effort to discourage the trade. She signed a guest book at the site.

Egypt will be the next and final stop on her tour of the continent, focusing on child welfare, education, and tourism and conservation.

Mrs. Trump opened the trip Tuesday in Ghana. The visit also included promoting the work of the U.S. Agency for International Development, whose funding President Donald Trump has twice proposed slashing by nearly a third. Lawmakers essentially ignored those requests.

Melania Trump walks through Ghana's 'Door of No Return'