Messi admits not playing well for Argentina at Copa America 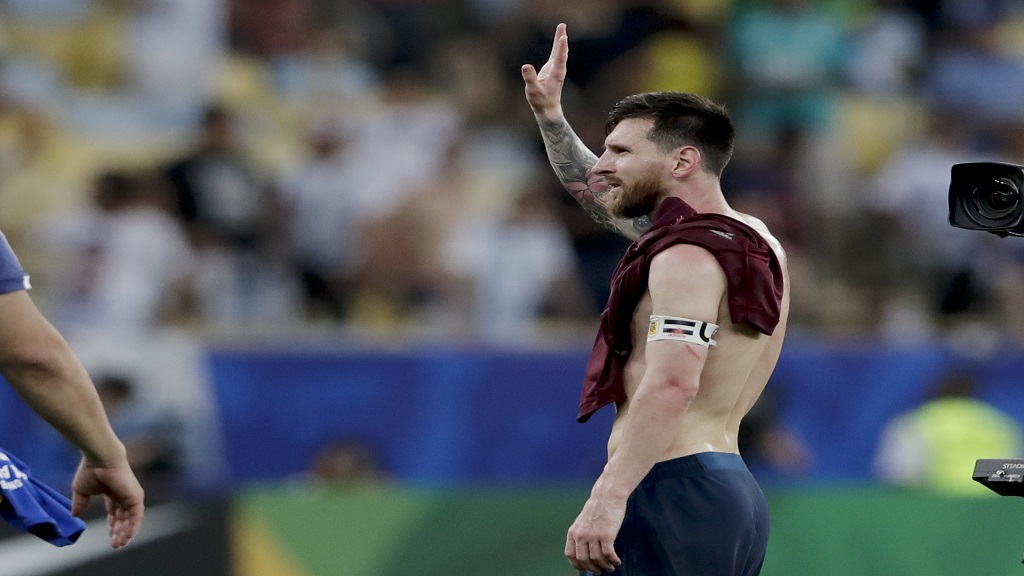 Argentina's Lionel Messi waves at the end of a Copa America quarterfinal match against Venezuela at the Maracana stadium in Rio de Janeiro, Brazil, Friday, June 28, 2019. Argentina won 2-0 and will play against Brazil in the semifinals.

Only one goal from the penalty spot against Paraguay and a reasonable performance against Qatar: Those were Lionel Messi's best moments playing for Argentina in Copa America ahead of his team's semifinal match against Brazil next Tuesday.

On Friday, after another disappointing performance in Argentina's 2-0 win against Venezuela in the quarterfinals at the Maracanã Stadium, the superstar admitted he is not playing his best for his national team once more.

"Truth is I am not doing my best Copa America or what I hoped to do," Messi said after the match at the same stadium he and Argentina lost the 2014 World Cup final to Germany. "It is always more complicated for us that want to attack, do something different when we have the ball, dribble the opposition."

Despite failing to lift the Champions League trophy with Barcelona, Messi won the Spanish league, scored 50 goals for his club in the season and is widely expected to win his sixth FIFA Player of The Year award. But with Argentina's Copa America team, filled with young players that are having their first international experience, he has failed to be nearly as impressive.

Meanwhile, striker Lautaro Martínez has outshone Messi with goals against Qatar and Venezuela. Veteran Sergio Agüero scored one of the best goals of the tournament against the Qataris and had a role in both Argentinian goals against Venezuela.

Argentina's defense did look steadier against Venezuela than in the three previous matches in the tournament, while the team's midfield blocked Venezuela from creating opportunities.

The only missing part for Argentina was its superstar, who made more news in his home country on Friday for at last singing his national anthem before the match than for his skills.

Asked about Messi's performance on Friday, Argentina coach Lionel Scaloni said Messi brings a different dimension to his side.

"What Messi brings to us is essential, I have no doubt. If you saw all that he brings in the locker room, maybe that opinion would be different" Scaloni said, without describing what the striker did on the pitch against Venezuela. "Messi is Messi, he is the best of all."

Once more, the Argentinian superstar partially blamed the field for a match that was far from attractive. Several Copa America pitches are being criticized by players because of bare patches and uneven surfaces.

"Sometimes it is hard to play, the fields are very bad, regrettably," Messi said. "It is embarrassing that Copa America is being played in a field like this. It doesn't help us play, have a quick ball, pass and go. The ball bounces poorly, we can't carry it."

Messi doesn't expect his life to be any easier against hosts Brazil, who only advanced to the semifinals on penalties after a goalless draw with Paraguay in Porto Alegre.

"They have players that can make the difference up front," the striker said. "We thought we would finish first in the group and be on the other side of the key, but we are in semifinals and the best are there." Argentina finished the group second to Colombia, who won the match between the two 2-0.

The last time Messi played against Brazil at the Mineirão Stadium in Belo Horizonte was in November 2016 during World Cup qualifiers. Brazil won 3-0, and Messi was barely noticed.

"What matters today is that we won and advanced," the striker said.