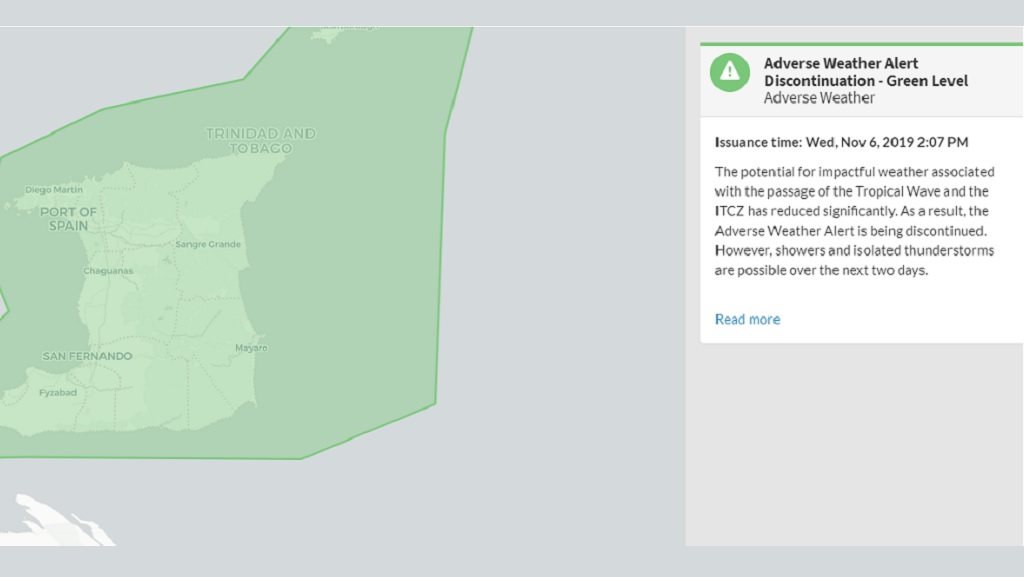 The Trinidad and Tobago Meteorological Service has discontinued an Adverse Weather Alert, updating the status to green.

In an update Wednesday, the Met Office said the potential for impactful weather has been reduced.

"The potential for impactful weather associated with the passage of the Tropical Wave and the ITCZ has reduced significantly. As a result, the Adverse Weather Alert is being discontinued. However, showers and isolated thunderstorms are possible over the next two days."

The discontinuation was issued after the passage of an Inter-Tropical Convergence Zone (ITCZ) which caused scattered showers and some gusty winds earlier this week.

The Trinidad and Tobago Meteorological Service (TTMS/Met Office) says the tropical wave approaching T&T is now west of the islands.

However, the Met Office notes that with the presence of the Inter-Tropical Convergence Zone (ITCZ), showers and thunderstorms remain in the forecast.

There is also a high possibility of street/flash flooding and gusty winds in excess of 55km/hr in areas of heavy downpours.

Periods of showers and thunderstorms associated with the combination of a tropical wave and the Inter-Tropical Convergence Zone (ITCZ), are likely to affect various parts of Trinidad and Tobago.

That's according to an Adverse Weather Alert - Yellow level, issued by the Trinidad and Tobago Meteorological Service (TTMS/Met Office).

The Met Office says there is also the likelihood of winds gusting in excess of 55km/hr.

Members of the public are urged to monitor weather conditions and updates from official sources www.metoffice.gov.tt and www.odpm.gov.tt.

Trinidad and Tobago Weather: Looks like another rainy day