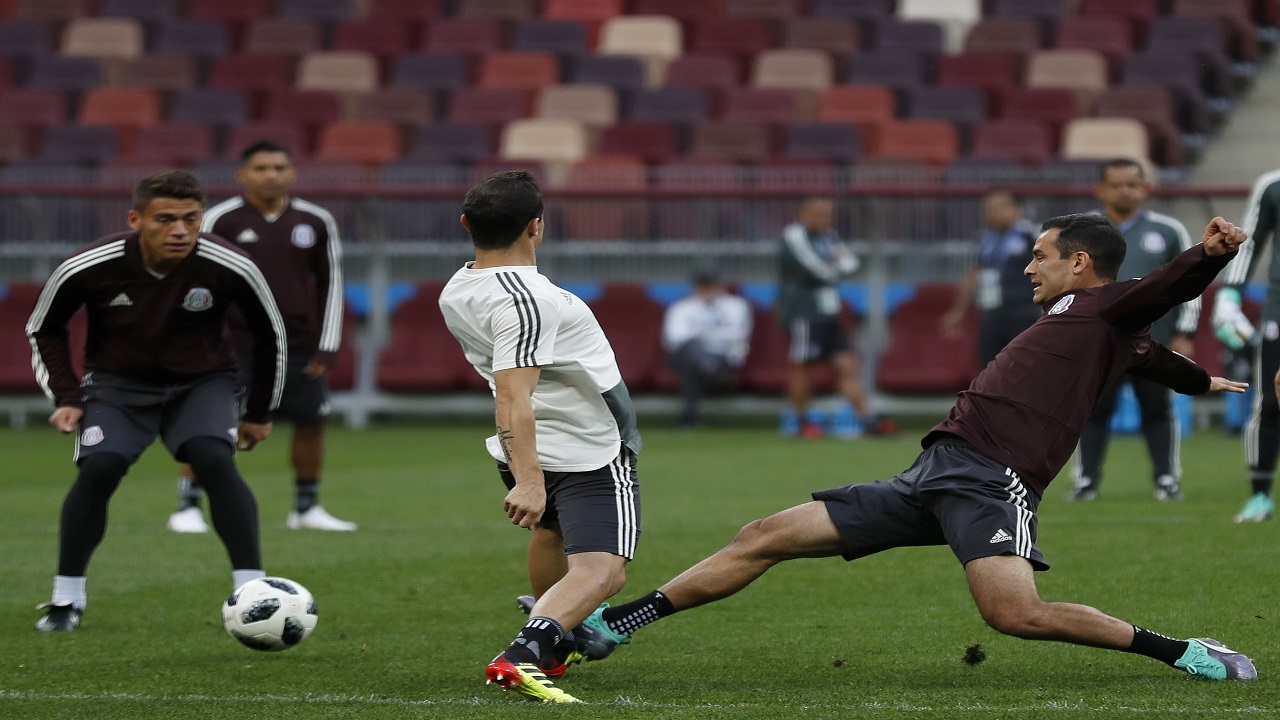 Mexico's Andres Guardado, center, and Mexico's Rafael Marquez, right, compete for the ball during Mexico's official training on the eve of the group F match between Germany and Mexico at the 2018 football World Cup in the Luzhniki Stadium in Moscow, Russia, Saturday, June 16, 2018. (AP Photo/Eduardo Verdugo).

The Colombian said Saturday that Germany's four-man backline leaves itself open to being hit on the counterattack because the team plays too high up the field.

"Any team that tries to play with a back four at the halfway line is exposed with 35 metres in behind them and they are not an exception," he said a day before his team takes on Germany in Group F at Luzhniki Stadium.

Still, that doesn't mean Mexico will sit deep and try to play on the counter, Osorio added.

"I believe 100 percent in our players and I think that with our midfielders we can fight for ball possession," he said. "We will not change the way we play. We have our style in the Mexican national team, and we're going to match up their game."

Mexico can go "head to head" with Germany in the middle of the park, Osorio said. He singled out Toni Kroos and Sami Khedira as particular threats in the Germany lineup, given their ability to distribute the ball.

Goalkeeper Guillermo Ochoa called on his defenders and midfielders to break up Germany's rhythm.

"We have to stop their flow. We can't let them move forward toward the goal," he said. "They're also very good at set pieces."

One area where Mexico need to improve is scoring goals after netting just once in their last four friendlies — and that was against Scotland, which haven't qualified for the World Cup in the last 20 years.

In response to criticism that Mexico doesn't score enough, Osorio pointed to his team's 3-0 friendly defeat of Iceland in March, and Argentina's 1-1 draw with the same opposition Saturday.

"I really believe that we have enough talent to be able to score against Germany and that's what we hope for tomorrow," he said. "We scored three goals against Iceland, and Argentina only scored one."