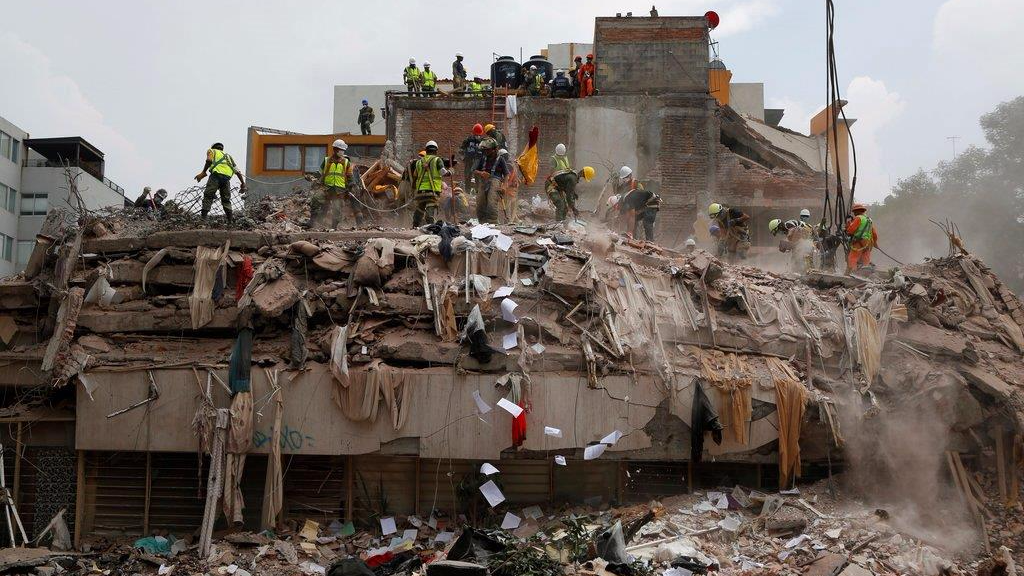 Workers shovel papers and debris off the top of the rubble of a building that collapsed in last week's 7.1 magnitude earthquake, at the corner of Gabriel Mancera and Escocia streets in the Del Valle neighborhood of Mexico City, Monday, Sept. 25, 2017. Search teams were still digging through dangerous piles of rubble Monday, hoping against the odds to find survivors after the Sept. 19 quake.(AP Photo/Rebecca Blackwell)

Mexican officials are tallying up the economic losses of the magnitude 7.1 earthquake that caused widespread damage in the capital, as the number of buildings that may need to be pulled down or need major repairs rose to 500.

The death toll in the quake rose to 331, with 192 of those deaths in Mexico City. Authorities pledged a return to normality, but many streets in the capital were still blocked by construction equipment and recovery teams looking to extract the last remaining bodies from the rubble. Mayor Miguel Angel Mancera said 40 to 50 people are still considered missing.

The city government announced a plan of reconstruction loans and aid for apartment dwellers who lost their homes or who may lose them as teetering buildings are pulled down.

But for city businesses like the downtown restaurant Guapa Papa, the result is already all too clear.

Sitting in the entrance of his restaurant Monday, surrounded by caution tape, Antonio Luna said: "This is a bust. It's already closed due to structural damage to the building."

He had to let go the three dozen employees at the 1950s-themed restaurant and is just trying to salvage whatever furniture and equipment wasn't damaged.

"In the end the company let everyone go because it couldn't continue having expenses," Luna said.

Mancera said that the city, in alliance with private developers, would handle repairs on buildings that needed touch-ups or minor structural work to be habitable. He offered low-interest loans to apartment owners whose buildings would have to be demolished and rebuilt.

However, it is unclear to what extent the city can force owners to demolish buildings. Some that were damaged in the 1985 are still standing, in part because court challenges can stretch on for years.

Moody's Investors Service said in a report Monday that the Sept. 19 earthquake that caused damage and deaths in the capital and nearby states "has the potential to be one of Mexico's costliest natural catastrophes."

Alfredo Coutino, Latin America director for Moody's Analytics, said they were still collecting data on losses, but a preliminary estimate was that the earthquake could knock 0.1 to 0.3 percentage point off growth in Mexico's gross domestic product in the third and fourth quarters.

For the full year, the impact on gross domestic product should be about 0.1 percentage point. "The impact on the year's growth will be small, particularly considering that the reconstruction work will compensate for some of the total loss in activity during the fourth quarter," Coutino said.

Money is expected to pour into the economy as Mexico City and the federal government tap their disaster funds. As of June, the city's disaster fund stood at 9.4 billion pesos (more than $500 million), making it slightly larger than the national fund, according to a Moody's Investors Services report.

Of course, the national fund also has to deal with recovery from the even stronger Sept. 7 quake that has been blamed for nearly 100 deaths, mostly in the southern states of Oaxaca and Chiapas.

There will be months of work ahead from demolition to repairs and reconstruction.

Mexico City Mayor Miguel Angel Mancera said that 500 "red level" buildings would either have to be demolished or receive major structural reinforcement. An additional 1,300 are reparable, and about 10,000 buildings inspected so far were found to be habitable.

At least 38 buildings, including apartments and office buildings, collapsed during the earthquake.

Mexico's education ministry also has 1.8 million pesos (about $100,000) to spend on school repairs. In Mexico City alone, only 676 of the city's 9,000 schools had been inspected and cleared to resume classes, Education Secretary Aurelio Nuno said Monday.

AIR Worldwide, a Boston-based catastrophe modeling consultant, provided a wide range for industry-insured losses, but noted they would be only a small part of the total economic losses. It put the insured losses at between 13 billion pesos ($725 million) and 36.7 billion pesos ($2 billion).

A graceful traffic roundabout encircled by restaurants, cafes and shops is now a sprawling expanse of medical tents, piles of food and other relief supplies, and stacks of building materials. While relief work went on outside Monday, men were busily wrapping furniture in foam and plastic inside the Antiguo Arte Europeo store.

Stone panels on the building's facade appeared cracked or were altogether missing. Saleswoman Luisa Zuniga said the owners were waiting for civil defense inspectors to certify there was no structural damage to the building before reopening to the public.

Meanwhile, they were moving furniture that could still be sold to their other branches.

"Then we'll see how long it takes to fix everything," she said. "It is important to get back to work."

Edgar Novoa, a fitness trainer, went back to his job Monday after working as a volunteer following the earthquake. Around midday, he stopped his bicycle at a cleared foundation where a building of several stories had stood near his home.

He knelt and prayed while others left flowers and candles at the site.

The government has said that nine foreigners, including five from Taiwan, died in the quake. One of the buildings that collapsed in the quake housed a business listed as Asia Jenny Importaciones, SA de CV. A South Korean man was also confirmed dead.

A Panamanian woman died, as did one man from Spain and one from Argentina.

Puerto Rico emerges from storm; water and some food scarce