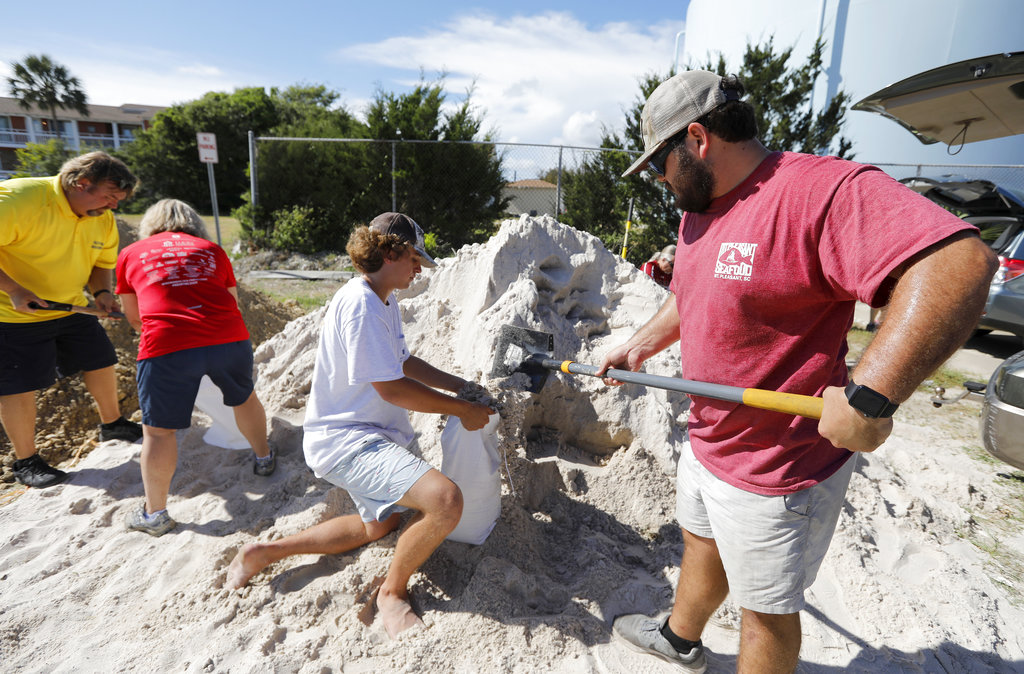 As mandatory evacuations begin for parts of three East Coast states, millions of Americans have been preparing for what could become one of the most catastrophic hurricanes to hit the Eastern Seaboard in decades.

Carrying winds of up to 140 mph (220 kph) as a Category 4 storm, Hurricane Florence is expected to approach Category 5 status on Tuesday as it slows and strengthens off North and South Carolina. The center of the massive storm is then forecast to meander Thursday, Friday and Saturday over a stretch of coastline saturated by rising seas.

South Carolina's governor ordered the state's entire coastline evacuated starting at noon Tuesday and predicted that 1 million people would flee. Virginia's governor ordered a mandatory evacuation for some residents of low-lying coastal areas, while some coastal counties in North Carolina have done the same.

North Carolina Gov. Roy Cooper said his state is "in the bullseye" and urged people to "get ready now."

Florence could hit the Carolinas harder than any hurricane since Hazel packed 130 mph (209 kph) winds in 1954. That Category 4 storm destroyed 15,000 buildings and 19 people in North Carolina. In the six decades since then, many thousands of people have moved to the coast.

The storm's first effects were already apparent on barrier islands as dangerous rip currents hit beaches and seawater flowed over a state highway — the harbinger of a storm surge that could wipe out dunes and submerge entire communities.

For many people, the challenge could be finding a safe refuge: If Florence slows to a crawl just off the coast, it could bring torrential rains all the way into the Appalachian mountains and as far away as West Virginia, causing flash floods, mudslides and other dangerous conditions in places that don't usually get much tropical weather.

"This is going to produce heavy rainfall, and it may not move very fast. The threat will be inland, so I'm afraid, based on my experience at FEMA, that the public probably not as prepared as everybody would like," said Craig Fugate, former director of the Federal Emergency Management Agency.

A warm ocean is the fuel that powers hurricanes, and this area of the ocean is seeing temperatures peak near 85 degrees (30 Celsius), hurricane specialist Eric Blake wrote. And with little wind shear to pull the storm apart, Florence's hurricane-strength winds were expanding.

By 5 a.m. Tuesday, Florence was centered about 975 miles (1,570 kilometers) east-southeast of Cape Fear, North Carolina, and moving west-northwest at 15 mph (24 kph). Its center will move between Bermuda and the Bahamas on Tuesday and Wednesday and approach the coast of South Carolina or North Carolina on Thursday.

Two other storms were spinning in the Atlantic. Hurricane Isaac was expected to lose strength as it reaches the Caribbean, and Helene, much farther out to sea, may veer northward into the open ocean as the 2018 hurricane season reaches its peak.

In the Pacific, Hurricane Olivia triggered warnings for multiple Hawaiian islands, blowing westward and expected to arrive in the state as soon as late Tuesday or early Wednesday.

Preparations for Florence were intensifying up and down the densely populated coast. Since reliable record-keeping began more than 150 years ago, North Carolina has been hit by only one Category 4 hurricane: Hazel, with 130 mph winds, in 1954.

Several meteorologists said Florence could approach what Hurricane Harvey did last year over Texas, dumping days of rain over a wide area. "I think this is very Harvey-esque," said University of Miami hurricane expert Brian McNoldy.

South Carolina Gov. Henry McMaster said an estimated 1 million people would be fleeing his state's coast, with eastbound lanes of Interstate 26 heading into Charleston and U.S. 501 heading into Myrtle Beach reversed to ease the exodus.

Virginia Gov. Ralph Northam's evacuation order applies to about 245,000 people, including parts of the Hampton Roads area and Eastern Shore.

Liz Browning Fox was planning to ignore these orders and ride out the storm in the village of Buxton on the North Carolina Outer Banks. She said her house, built in 2009, is on a ridge and was built to withstand a hurricane, but even the most secure homes could be surrounded by water, or penetrated by wind-launched debris.

"You never know, there could be tree missiles coming from any direction," she said. "There is no way to be completely safe."

But, she added, she's not sure whether going inland would be much safer: "I don't know where to go from here."

Homeless and vagrants not prepared for Hurricane Isaac

Life slowly returns to Barbuda a year after Hurricane Irma