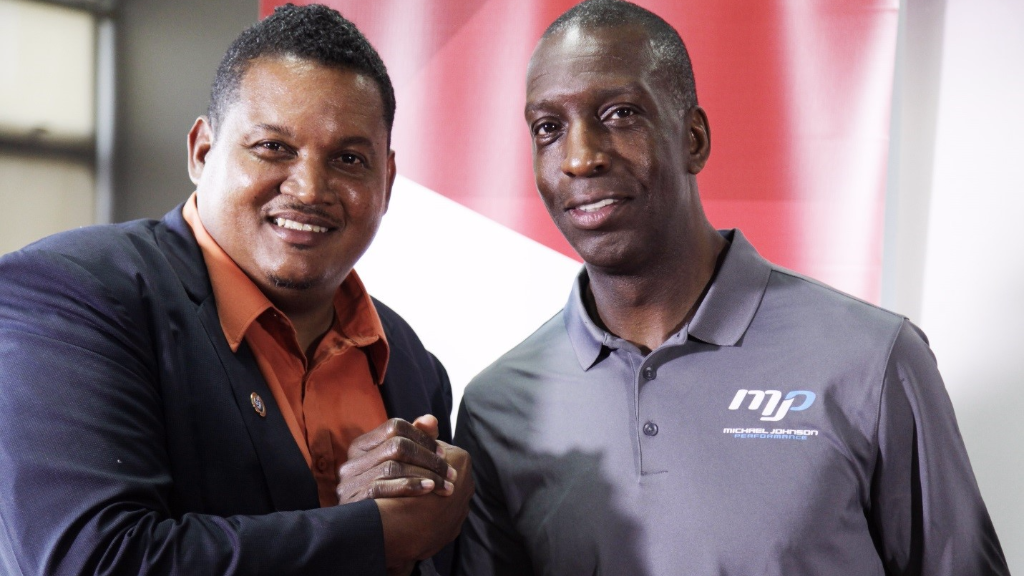 The Honourable Darryl Smith, Minister of Sport and Youth Affairs, hailed the partnership between the National Association of Athletics Administrations of Trinidad and Tobago (NAAATT) and the Michael Johnson Performance Unit (MJP) as a ‘shining light.’

The four-day event, sponsored by the National Gas Company (NGC), was launched on Wednesday at the VIP Lounge, Hasely Crawford Stadium. It is a partnership between the Michael Johnson Performance Unit (MJP), the NAAATT, the governing body for athletics in Trinidad and Tobago, SPORTT and the Ministry of Sport and Youth Affairs.

Minister Smith in his address said, that it is always good to see the National Governing Bodies (NGBs) being proactive, in light of the current economic situation. He also complimented Mr. Ephraim Serette, President of the NAAATT, for his vision and innovative approach to developing world-class athletes.

Sprint legend Michael Johnson, holder of four Olympic gold medals and eight World Championships gold medals, is the focal point of the four-day event which will provide support services to athletes and coaches. This program is aligned to the Youth Elite Program and is part of the NAAATT’s strategic goal, to create world-class athletes to represent Trinidad and Tobago in international competitions.

Johnson in his address said, “It is a great honour to be involved in the program, I have been partnering with Trinidad and Tobago for the last four years and I am incredibly amazed at the talent in T&T.” He noted that the MJP is about helping young, already-identified athletes reach their full potential.

For his part, Mr. Ephraim Serette, assured that the NAAA was focused on employing the MJP to build relationships with coaches and provide support to athletes, to allow them to be the best they can be, as they enter the world stage.

The NAAATT’s Youth Elite Programme is closely aligned to the High-Performance Unit of the Sport Company of Trinidad and Tobago (SPORTT), and the Ministry of Sport and Youth Affairs, which will also provide support services for the initiative.

In closing, Minister Smith announced that for the first time, a Reward and Incentive Policy for athletes would be incorporated into the revised Sport Policy, which is currently before the Cabinet for consideration.

The Minister also reminded all in attendance that 2017 was the most successful year for sport and that fundamental changes in policies and programs were being made in time for the Tokyo Olympics.