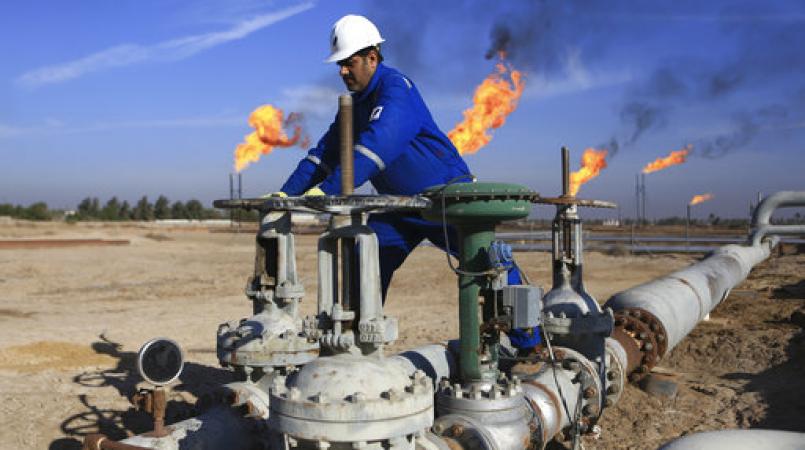 Iraq's oil minister said on Sunday that his country plans to increase daily crude oil production to 5 million barrels by the end of this year, up from the current rate of about 4.4 million barrels per day, to secure cash for its ailing economy.

Iraq, where oil revenues make up nearly 95 percent of the budget, has been reeling under an economic crisis since 2014, when oil prices began their descent from a high of above $100 a barrel. The Islamic State group's onslaught, starting in 2014, has exacerbated the situation — forcing Iraq to divert much of its resources to a long and costly war.

Addressing an energy conference in Baghdad, Oil Minister Jabar Ali Al-Luaibi didn't give details on which of the country's oil fields would supply the increased output.

"There are positive elements in that deal and we achieved a lot of its targets," al-Luaibi told reporters on the sideline of the conference. "Work and cooperation are underway ... to reach the 1.8 (million barrels a day) reduction," he added, without divulging whether Iraq is going to support an extension to that deal.

OPEC Secretary General, Mohammed Barkindo, said the compliance among the participants was 86 percent in January and 94 percent in February. Barkindo told reporters that OPEC members would consider whether to extend the production decrease agreement at a meeting next month.

The deal propped up the crude price to around $50 per barrel.

Al-Luaibi also said that more 15 billion barrels are planned to be added by 2018.

Iraq is also grappling with a major humanitarian crisis. The U.N. estimates that more than 3 million people have been forced from their homes since 2014. It also faces growing dissatisfaction among residents of areas recaptured from IS who have had their properties demolished and suffer from scarce public services.