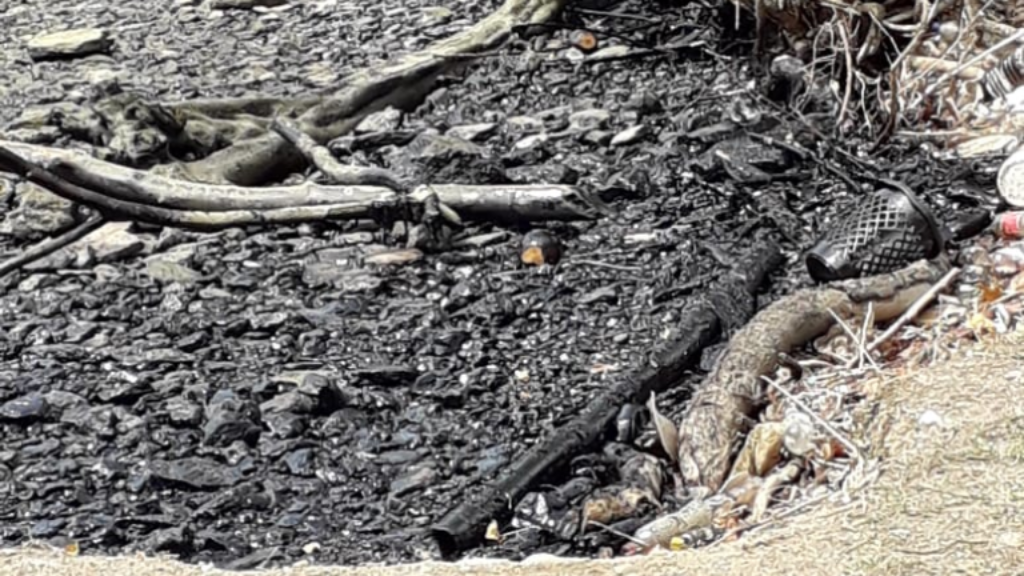 Photo courtesy the Fishermen and Friends of the Sea (FFOS).

There have been conflicting reports from the Communications Ministry and the Fishermen and Friends of the Sea (FFOS) regarding an oil spill near Gaspar Grande in Chaguaramas.

A statement from the Communications Ministry on Tuesday dismissed claims of a spill, noting that investigations carried out by the Trinidad and Tobago Coast Guard identified the presence of sargassum seaweed.

"The TTCG was also joined by the Institute of Marine Affairs (IMA), and checks were carried out in the vicinity of M/V Power 1, Bombshell Bay, Gaspar Grande and environs.

Following the thorough investigation, both the IMA and TTCG Squadron have confirmed that there was no sighting of oil; instead, a large amount of seaweed was found."

The FFOS, in turn, has rejected the Ministry's statement that there is no truth to reports of a spill in the area.

In a statement in response to the Ministry's release, the FFOS said oil washed into the Anchorage Bay area last Friday, while on Monday morning there was reported oil sheen spotted flowing out towards the First Bocas.

It also shared a 25-second video of oil it said was spotted in the area.

"At the peak of the Spring tide, the water moves at speeds up to 3 knots, but at much faster speeds through the narrow channel of the 1st Bocas. It means that oil in the Pointe Gourde- Chaguaramas area would flow out of the Gulf within an hour at falling tide leaving only the residual sheen and the culprits know it," FFOS said.

It also noted that it is a common occurrence that oil is being accidentally spilled or deliberately dumped in the Chaguaramas and in the wider Gulf of Paria areas.

The FFOS countered that the Ministry is aware that there is a recurring history of oil being discharged by industrial service vessels that remove bilge and other waste oil from commercial vessels and oil rigs in this service area.

The group said it has continuously responded to reports of oil dumped or spilled in the Northwestern peninsula and questioned when Government will prosecute, fine and incarcerate the Chief Executive Officers (CEOs) of these companies under the Minerals Act.

Calling on the relevant authorities to act, the FFOS said fishers are suffering.

"While our sea and fish continue to be contaminated by cancer causing poly cyclic aromatic hydrocarbons, the Ministry and Government have a "duty of care" to ensure enforcement of the law “without fear or favor”."