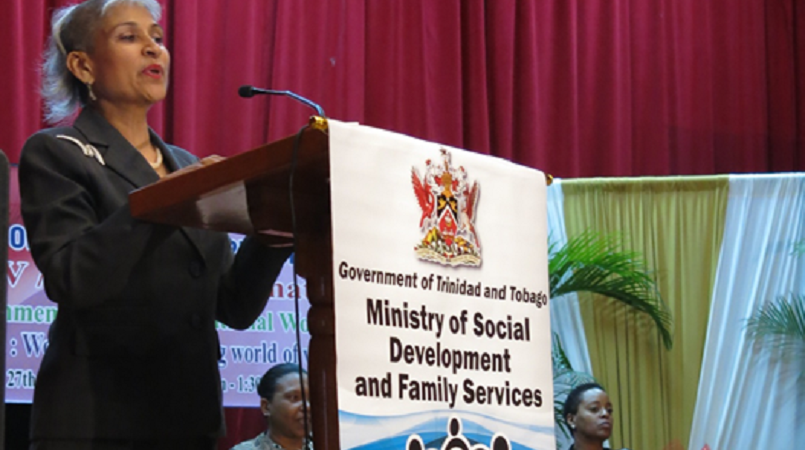 On Monday, March 27, 2017, City Hall, Port of Spain was transformed into energetic female fortitude as the HIV Coordinating Unit of the Ministry of Social Development and Family Services conducted a Symposium to mark International Women’s Day 2017.

The theme of the event “Women in the changing world of work; be bold for change,” promised empowerment and entertainment and delivered on its promise.

The symposium, with its line-up of presenters during its interesting edu-theatre and panel discussion allowed the packed, attentive, primarily all-female audience, the opportunity to explore how issues in their personal, social and professional lives can be related to HIV/AIDS and its spread.

In her address, Permanent Secretary in the Ministry of Social Development and Family Services, Joy Persad-Myers, stated that she was proud to be a part of a great team of dedicated women working towards national social development, especially since the Ministry’s workforce was 60 percent female, a factor which PS noted was crucial, since the “the face of HIV/AIDS in Trinidad and Tobago had become young and female.”

Citing statistics provided by the 2016 Global AIDS Response Progress Report for Trinidad and Tobago, PS Meyers informed the audience that in 2014 most new cases of HIV infections (64 percent) were concentrated among the 15-49 years age group with females accounting for 60 percent of all new infections among adolescents aged 15-19 and just over 50 percent among young female adults aged 20-24.

The panel discussion included two very profound testimonies, which included a very candid discourse by a mother of three who has been living with HIV/AIDS for the past 6 years.

The symposium, which has been held annually in March since 2008 by the Ministry of Social Development and Family Services through its HIV/AIDS Coordinating Unit for its female staff, concluded on a high note with female attendees encouraged to make good use of the presented information to foster a greater sense awareness and empowerment among themselves, their families and other colleagues and also to help empower and transform the lives of the many vulnerable women and families that are served daily through the Ministry’s programmes and services.